This is a story of how Major League Baseball (“the MLB”) out-innovated other professional sports leagues (NFL, NBA, NHL) and Silicon Valley (Facebook, Google, Amazon) in response to an increasingly digitalized supply chain for live entertainment content. If you’ve watched NCAA March Madness games on your computer or Game of Thrones on your iPad, you’re well-acquainted with the MLB’s self-incubated streaming technology. More below.

News, movies, and music are migrating to our mobile devices and computers – a trend that is both a concern and opportunity for sports and entertainment providers like the MLB.

The concern stems from that fact that most MLB content was governed by cable companies and consumed through TV. After a de facto monopoly on live content, cable is losing juice as the consumption of live sports undergoes “digital 2.0” via online streaming. As depicted in Exhibit 1 below, which illustrates the process of generating and delivering live content, it is a necessity for the MLB to restructure its supply chain to meet end-users (fans) where they’re most engaged.

The opportunity for the MLB lies in the various shortcomings of cable. First, since cable is a bundled service, it comes at an unnecessarily high cost. Second, cable is tethered to a defined geographic area, leaving out-of-market fans struggling to keep up. Third, contractual disputes between networks and cable providers have led to temporary blackouts in major markets, including New York and Los Angeles. In all three instances, the supply of content becomes starved or completely shut off, which in a cable-dominated world was the price of doing business.

In recent history and for the near-term, the MLB has stepped up to the plate in response to the challenges of evolving digitalization. In 2000, the MLB’s team owners founded a start-up: MLB Advanced Media (“BAM”), a separate entity within MLB that would go on to develop the preeminent over-the-top (“OTT”) / direct to consumer live streaming application [1]. BAM’s pinnacle product – MLB.TV – allows fans to watch any out of market game on their computer, smartphone or tablet for ~$100 per season [2]. The games are streamed in HD quality where fans view the same production that is broadcasted on cable TV (Exhibit 2). By mitigating cable’s reign over the supply of content, the MLB now disseminates its product to a wider breath of end-users.

The MLB’s decision to solve its supply chain problem in-house will continue to pay dividends in the medium and long-term. As it turns out, BAM’s streaming tech is world class and other sports, media and entertainment platforms want a piece of the action. The World Cup, NHL, PGA, NCAA March Madness, WWE and PPV boxing are all paying clients of BAM [1]. In 2015, HBO called on BAM to run its “HBO Now” platform after their first, in-house attempt at streaming (“HBO GO”) led to outages during Game of Thrones and True Detective [3]. iPhone, Roku, Apple TV, Playstation 3 and other streaming-focused hardware now beta test with BAM to make sure their designs are explicitly compatible before broad market launch [3]. The entire supply chain of live content consumption revolves around BAM.

The significant monetary opportunity within live streaming has drawn the attention of Facebook, Google, Amazon, and Twitter. While MLB beat Silicon Valley to the party, these media giants have deep pockets, a large captive audience, and are prepping their arsenals to make a serious play at hosting streaming. To further ride the opportunistic wave of increased digitalization, the MLB should forge meaningful partnerships with these companies. In fact, they’re getting a head start. In 2017, select regular season MLB games were streamed live on Twitter and Facebook and the 2017 World Series was available on YouTube TV [6].

Additionally, the MLB should think about future vehicles of content consumption. Virtual reality (VR), for example, was omitted from the right side of Exhibit 1 but will play a meaningful role going forward. The NBA has already streamed live games in VR through its partnership with NextVR [7].

A few open questions for discussion: 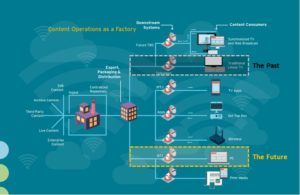 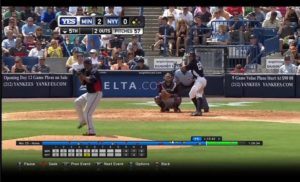