Over the past ten years, the phrase “online dating” has undergone a social de-stigmatization. Once dubbed socially unacceptable and reserved for older “untouchables”, it is now 61% of Americans aged 18-29 and 44% of Americans 30-59 are currently using a dating site/app or have used one in the past(1). More broadly, recent studies suggest that one in five relationships are initiated online and by 2040, 70% of couples will have met via click, swipe, or double-tap(2). And yet, overwhelmingly users feel as though dating apps waste the very precious thing they sought to protect: time. As one woman poignantly put it, “there are hundreds of timewasters, losers, and just general muppets on there who have nothing better to do than mess you around.(3)” While the exploding $3bn online dating industry has attracted a multitude of players – ranging from demographic-specific silos like FarmersOnly.com to quasi-intellectual elite seeking individuals on The League – many users have found the endless swiping sessions to be frustratingly fruitless (4). Nobel Laureate Alvin Roth describes dating markets as matching markets: “To work well, they have to overcome all the problems markets have to overcome.(5)” In an effort to resolve this issue of undesirable matches, companies are now turning to artificial intelligence to help improve the selection process, and consequently, the quality of the user experience. According to VentureBeat, “today’s dating sites are only as good as the data they’re given.” 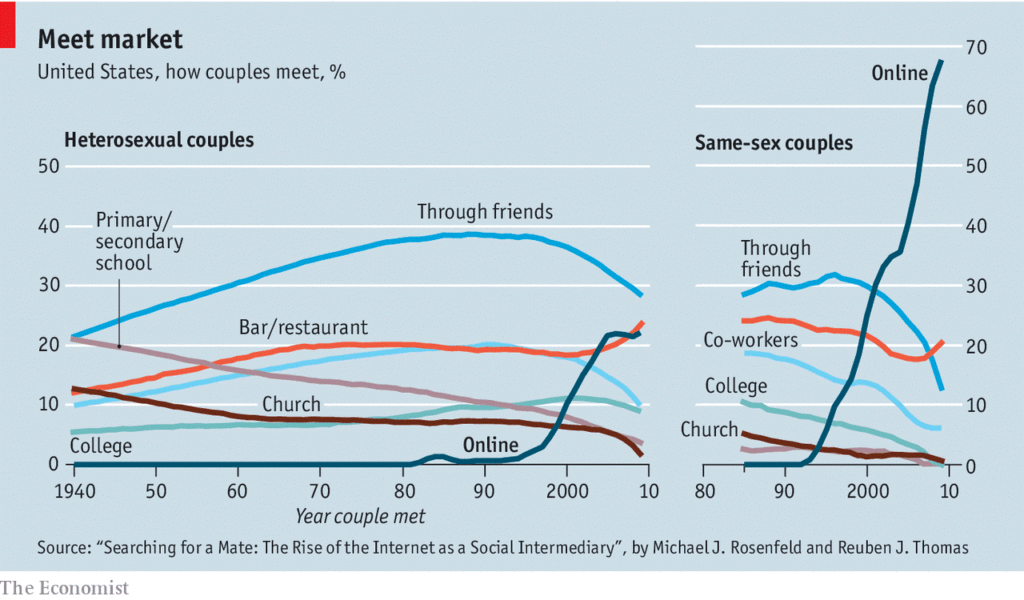 Machine Learning to the Rescue? The “Relationship App” Offers A Fix

Founded in 2012, Hinge originally sourced ideal matches based on the Tinder-ized swiping approach that collated a pool of candidate based on the friends of friends of your Facebook network. In 2017, the company underwent a transformation; rebranded as the “relationship app”, the company sought to provide create more meaningful connections by showcasing possible matches in a vertical timeline format and prompting dates to like and respond directly to specific photos or prompts to match with each other(6).

Earlier this year, Hinge released the “Most Compatible feature”, which “takes into account how people act on the app (such as who and what content you previously liked). It wants to serve as a virtual matchmaker and aims to find people similar to those you previously matched with on the platform.”(7)

In order to produce these matches, Hinge uses machine learning and the training data received through a user’s interaction with the app, i.e. preferences through liking and passing choices, and then use that information to suggest a match whose preferences best align. CEO Justin McLeod describes the pairing in an interview with TechCrunch as “the best pairing we think we can find [in our user base].” (8)The app’s technology categorizes people based on who has traditionally liked them in the past. It then finds a pattern in those likes and suggests matches based on who other users also liked once they liked this specific person, a la Netflix’s recommendation feature. Both users then receive a recommendation and are given 24 hours to accept.

This process is based on the Gale-Shapley algorithm, which was designed in 1962 by mathematician and economists David Gale and Lloyd Shapley in response to the stable marriage problem, which can be summarized as followed:

“Stable Marriage Problem states that given N men and N women, where each person has ranked all members of the opposite sex in order of preference, marry the men and women together such that there are no two people of opposite sex who would both rather have each other than their current partners. If there are no such people, all the marriages are “stable”(9).

In early tests of this newly released feature, the company has found that users were “8x more likely to go on dates (as signaled by an exchange of personal phone numbers) with matches found through Most Compatible than any other Hinge recommendations.”(10)

The company also released a user feedback feature called, “We Met”. Aimed to help better improve Hinge’s recommendation, “We Met” allows two members who were matched to confirm that they went on a date and then answer a few questions and share how that date went (11). In an effort to better improve the flow of information, the Company should incorporate more open innovation and crowdsourcing techniques in its’ product development and innovation. In addition to the “We Met” feature, the Company should allow users to link their other social networks like LinkedIn as well as their calendar and organization apps like iCal in order to inform the app on behavioral patterns. Additionally, the app can further improve their understanding of matching tendencies by allowing users to upload photos of ex-partners. By using information such as which events a user is attending or who a user has traditionally been attracted to, the app can perhaps better provide match recommendations.

While these recommendations have merit, there a few considerations that warrant hesitation, specifically: (1) how should Hinge navigate around privacy concerns and information provided on non-users and (2) how will the app deal with non-committal users (i.e. users that do not use the app frequently or provide inconsistent feedback?)

Crowdsourcing improvements to America’s security: Bug bounties and open innovation in the U.S. Department of Defense

Are Machine Learning Benefits Worth Cyber-Security Risks at Chevron?