Let’s Shed Some Light on LEDs 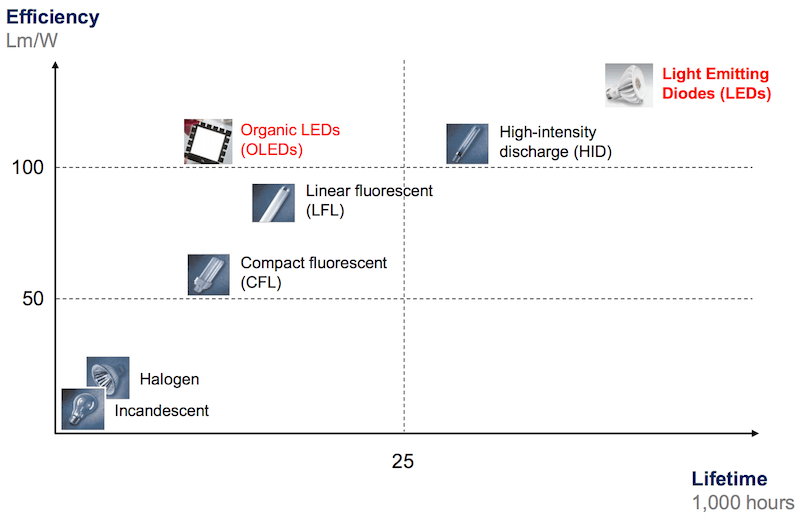 Lighting solutions have broadly assumed the same format since Edison made his famous discovery in 1879. Today lighting accounts for approximately 17% of electricity consumption in the US (14% residential, 38% commercial / industrial)2. LEDs have long been considered the solution to the inefficient incandescent bulb, primarily due to the significant savings to be garnered through operation. However, the longstanding barrier to LED adoption has been the cost of the bulbs. While these costs are falling to more reasonable levels, certain business models have been developed to increase the rate of adoption.

One company, UrbanVolt, has been at the forefront of driving this change with its “Lighting-as-a-Service” model3. Its business is predicated upon the proliferation of LED bulbs among commercial and industrial businesses as a means to reduce energy consumption in the commercial and industrial sectors. Specifically, UrbanVolt replaces a customer’s legacy incandescent bulbs with LED bulbs at no upfront cost. It then provides maintenance and troubleshooting services to the customer for the contract period. The expected life of LEDs can exceed 20 years, and so the customer stands to benefit from the switch long after the expiry of the contract with UrbanVolt, usually five years in duration.

As public policy and market regulations relating to energy efficiency and greenhouse gas emissions become increasingly stringent, potential customers of UrbanVolt are beginning to seek more ways in which they can reduce their energy costs and carbon footprint. Switching to LED lighting is one obvious way to reduce energy consumption without changing company behavior or practices, allowing resources to be directed to other areas of the strategy. Expected savings can reach 80% from both an energy and economic standpoint. The economics are shared between UrbanVolt and the customer.

Consensus expectations point to an increase in the velocity of LED adoption over the next decade. From 6% penetration today, Goldman Sachs forecasts that LEDs will represent 27% of the installed base of bulbs by 2020 and almost 55% by 2025. It is expected that the LED evolution in the US will present a 4% headwind to power demand growth, driving demand reductions of 6% in coal and 2% in natural gas over the same period.

One issue UrbanVolt faces is that of a shrinking market4. With an expected life of approximately twenty years, LEDs far outlast the service contract and profit sharing agreements put in place with the customer (at the end of which they own the bulbs). Increasing LED penetration will likely drive a boom in the market over the next five years or so, as customers progress from those in the innovator bracket to those in the early adopter and early majority categories. Following this, the market is likely to taper off as the latter portion of adopters come to the market, while the existing customers enjoy the benefits of the lengthy product life-cycle.

UrbanVolt is cognizant of this fact, and has a stated aim to put itself out of the lightbulb business as quickly as possible – such a feat would imply an extremely successful adoption campaign. It is already developing a Lighting-as-a-Service solution for residential customers, who are not served under the current model. It is also investigating other “Product-as-a-Service” energy technologies that could be useful to customers in further reducing their carbon footprints. The launch of one such prospect has been mooted for 2017.

While UrbanVolt is investigating how it might leverage its skill set in the “Product-as-a-Service” space, I believe there are further opportunities to utilize its expertise in the lighting sector to drive both economic and environmental value. Once such opportunity is to leverage the IoT revolution5,6. There are several things that can be done with respect to lighting, including the shift in focus from efficiency, reliability and operation to controllability, connectivity and integration in smart buildings and cities. UrbanVolt’s position as an installer and provider of maintenance to LED lighting systems leaves it well placed to transition to a systems integrator and platform developer, a space that is likely to become more important as smart buildings and smart cities increase in popularity.

While working to put oneself out of business may seem counterintuitive, it speaks to the idea that the consumer is tiring of the high turnover and rapid obsolescence of many products in today’s market. Building a business around true, sustainable value to the consumer and the environment may not be such a bad idea afterall.

From China with Love: How BYD is Dominating the Global EV Space

Good to the Last Drop? The Effect of Climate Change on the Coffee Industry and Keurig Green Mountain

Student comments on Let’s Shed Some Light on LEDs