When thinking of climate change, thoughts of smoky gases emitting from power plants, refineries and vehicle tailpipes are typically the first elicited. But just as impactful are those gases released from farmed animals. Raising livestock for meat consumption, an industry with annual revenues $175B in the US alone, is second to energy production in greenhouse gas (GHG) emissions, and greater than all forms of transportation industries combined1. Adding to this problem is the expected growth in population of 1.5B by 2050 that will increase meat consumption by 70%2.  The meat industry needs to radically solve how to both feed the demand and simultaneously lessen its impact in doing so. 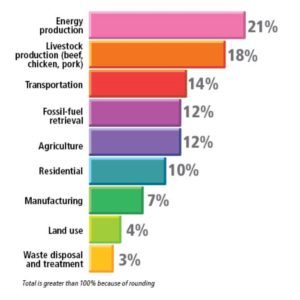 At its current rate, the livestock industry alone will take up the entire ‘carbon budget’ set by the Paris Convention to limit the global temperature increase to 2°C by 2050. Temperature increases beyond this can turn climate change into an extremely devastating state 3.

Out of all the total global emissions, 15% come from livestock, of which 67% is beef and dairy production. The process of producing meat for consumption- raising, processing and transporting- is not only energy intensive but also involves deforesting (the clearing of land and plants that absorb atmospheric CO2) for grazing livestock. Livestock feeds on this land causing their eructation and flatulence to release methane (which is a GHG 20x more potent than carbon dioxide (C02))4.

Reducing consumer meat consumption and shifting towards vegan diets would be the easiest ways to drive declines in meat demand but almost impossible to implement. What needs to be done is a major shift in availability of more climate-friendly food options.

Tyson Foods Inc., with revenues of $41.4B5, is the largest producer of meat in the world. It has taken a step towards breaking the vicious cycle it is the main culprit of. As stated in its current 10K, Tyson is taking the climate impact threat seriously as it acknowledges the regulation and compliance risk it needs to abide by to lessen its production of GHG emissions into the future6. In October of 2016, Tyson purchased a 5% stake in a vegan startup, Beyond Meat, a plant-based meat company, making Tyson the first major meat company to invest in alternative-animal meat production7.

Non-animal protein production is an interest for a rapidly growing class of start-ups and venture capitals focusing on engineering innovative food products to drive sustainable and ethical food alternatives. Animal-alternative meat accounts for only 1%  of total current meat market but Tyson is thinking ahead. Although this new product diversification can improve Tyson’s image to the more ethical and sustainable persuasion, it’s just about business. This new animal-alternative food technology is expected to grow to 1/3 of total meat market by 20548. The positive effects of this new market also go beyond climate change reduction by improving people’s diets and animals’ welfare; less red-meat consumption leads to a reduction of cardiovascular disease in humans and eliminates the need for animals subjected to inhumane treatment and slaughter in factory farms.

Other Solutions to Consider

Another alternative to animal-based meat Tyson can consider is tissue culture meat9. Tissue culture meat essentially takes animal tissues and sequesters the muscle and fat cells in a container to allow them to grow naturally using fetal bovine serum in a lab. The result is a lean piece of beef that is lower in calories and cholesterol than a conventional steak and burger. Although this new process is new (and expensive), there are several VC’s investing in these start-ups, with big backers as famous as Bill Gates and Google co-founder Sergey Brin.

Besides waiting for animal-alternative meat production to scale enough for affordability and convenience to end-consumers, there are other methods Tyson can implement to its current livestock production to lessen its emissions of GHGs. Organic agriculture implementation for livestock grazing can increase the rate of soil sequestration of GHGs and reduce the methane livestocks emit10. Another alternative is the introduction of algae into livestocks’ diets. Algae absorbs atmospheric CO2 and can be a climate-friendly alternative energy source11. Introducing algae to livestock feed can not only improve the nutrional and digestivitiy of livestock but also reduce the need for deforestation.

The impact of the agribusiness does not rely solely on the producer. It is up to the end consumer to choose other options so the retailer can stop stocking, and the manufacturer stop producing. But, would a consumer care if what they ate improved the environment and reduced the killing of animals? Probably not. All they care about is about the taste, price and convenience8. So, it is up to food giants like Tyson to start offering these options for the protection and longevity of this world and all the life within it.

4. “How much does animal agriculture and eating meat contribute to global warming?”, Skeptical Science (Nov 2015),

Ski Season is Coming… But Where is the Snow?

Allstate: Are we in good hands?

Student comments on Is Tyson Forcing Itself Into Sustainability?