Technological innovation has allowed mankind to accomplish incredible feats over the past few decades: we’ve put a man on the moon, made communication between distant parts of the world nearly instantaneous, and developed medical imaging machines which allow doctors to accurately diagnose patients without performing surgery.

We’ve also made a robot that can vacuum those Cheetos you spilled under your couch three weeks ago.

iRobot—the market leader in household robotics—began its journey in the defense contracting industry. The company’s devices have included landmine-detection robots, bomb-disposal robots, and robots designed to carry heavy loads for small, dismounted groups of soldiers.[1] However, iRobot became a household name in 2002 when it embarked into the consumer products realm with its release of the “Roomba,” a small, disc-shaped machine which could autonomously vacuum a prescribed area. iRobot has since broadened its product portfolio with robot mops, gutter cleaners, and pool cleaners.

Over the past fourteen years, iRobot has progressively gained market share over more established, “conventional” vacuum brands like Hoover, Dyson, and Black & Decker. As a segment, robotic cleaners (also known as “robovacs”) are expected to grow at a CAGR of 11.4% to 2022 in the United States.[2] Worldwide, robovacs command 20% of the vacuum market—of which 70% is controlled by iRobot. 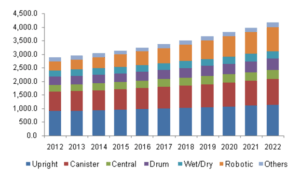 Despite this tremendous performance, growth has been somewhat restricted by the high price of a robovac: most products are priced well above $500,[4] although iRobot recently developed a $274 vacuum with an impressive range of capabilities (automatic cleaning, docking/recharging, and adjustment for floor types). iRobot competes well with high-priced vacuums (i.e. Dyson), but so far fails to provide an alternative to its lower-priced competitors. For example, most of Hoover’s vacuum cleaners are priced below $200.[5]

iRobot is well-positioned to continue to lead the robovac category, which has recently become its sole focus. In early 2016, it “divested itself of its defense and security robotics division and is now focused entirely on the home consumer space.”[6] To continue to gain market share over its conventional competitors, it must focus on two things: 1) lowering its entry-level price point, and 2) be the first robovac manufacturer to fully capitalize on the internet of things (IoT). For this post, I’ll focus primarily on the latter.

iRobot has already started to entrench itself into the IoT, but must continue to pursue new technologies. Its newest Roomba can be controlled via smartphone—but Colin Angle, iRobot’s CEO, has much more in mind. He envisions a robotic vacuum which continuously its environment and assesses potential threats (i.e. robbers), monitors temperature (and link to smoke alarms in case of fire), and much more.[8] To stay relevant, iRobot must be the first business to incorporate these functions into its devices at a reasonable price. At the moment, the smartphone-controlled Roomba sells for almost $800.

In addition, Roomba should listen to its customers and work more with other IoT companies. For example, there is no way to connect the Roomba and Amazon’s Echo to date. It’s necessary for iRobot to stay on the cutting edge of technology in the consumer space, as the market is quickly becoming crowded. A similar product, Neato’s Botvac, provides most of the same functionality (including smartphone connectivity) at a lower price.[9] iRobot risks losing its competitive advantage if it fails to innovate ahead of its competitors. 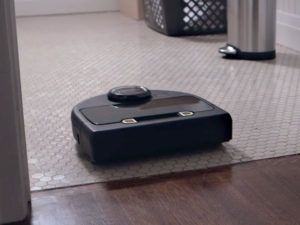 Ultimately, the future of iRobot is bright—provided the company continues to integrate into the IoT and lowers its entry-level price point. Given the company’s steady track record of success, it seems likely that iRobot will continue to succeed. The free press can’t hurt, either: a video of a cat riding a Roomba has over 11 million views on YouTube.[11]

[9] Christian de Looper. 2015. The Neato Botvac Is A Connected Vacuum That Can Be Controlled With A Smartphone. [ONLINE] Available at: http://www.techtimes.com/articles/81548/20150902/neato-botvac-connected-vacuum-controlled-smartphone.htm. [Accessed 18 November 2016].

Uberization of Investment and Financial Planning

Need a mortgage? There’s an app for that too

Student comments on iRobot’s Roomba: Vacuuming the floor with the competition