Intel has just announced that it will invest $250 mm to make autonomous driving a reality. The investment will aim to foster development in connectivity, communication, context awareness, deep learning, and security, all of which are critical for self-driving vehicles to approach fruition. [1] And just last month, Intel Capital confirmed more than $38 million of investments in 12 startups across a range of innovative technologies, including big data analytics, autonomous machines and AR/VR. [2] The company just acquired Nervana Systems for around $400 million, adding another artificial intelligence startup to its portfolio. [3] on top of its Investment in FPGAs to enable reconfigurable data centers and AI processing of the future. [4]

So why is Intel going all out to be a driving force in the Internet of Things?

By the end of 2020, an installed base of 24 billion IoT devices worldwide is projected, up from 4.2 billion in 2015 with an average 10-year ROI for businesses investing in the IoT at 252%. [5] The next big growth opportunity is right here but the competition is intense. Big Blue Chip companies, such as IBM, Intel, and Cisco, are quickly ramping up their IT infrastructure and are investing in the IoT. IBM announced $3 billion for a business unit that will focus on the development of solutions for the IoT. Amazon is still outpacing its cloud competitors. Intel lags behind rival Qualcomm in the mobile space and it is playing catch up to IBM in software analytics. Intel must come up with a viable strategy – not only to grab the opportunities but also to address major challenges the company faces.

As Intel’s PC sales have slowed, it has increased its focus on the IoT segment, which accounts for less than 5% of Intel’s revenue at present. As sensor and hardware costs continue to drop, Intel needs to move up the value chain and tap into value-added software and services, which account for major revenue portion of future IoT. 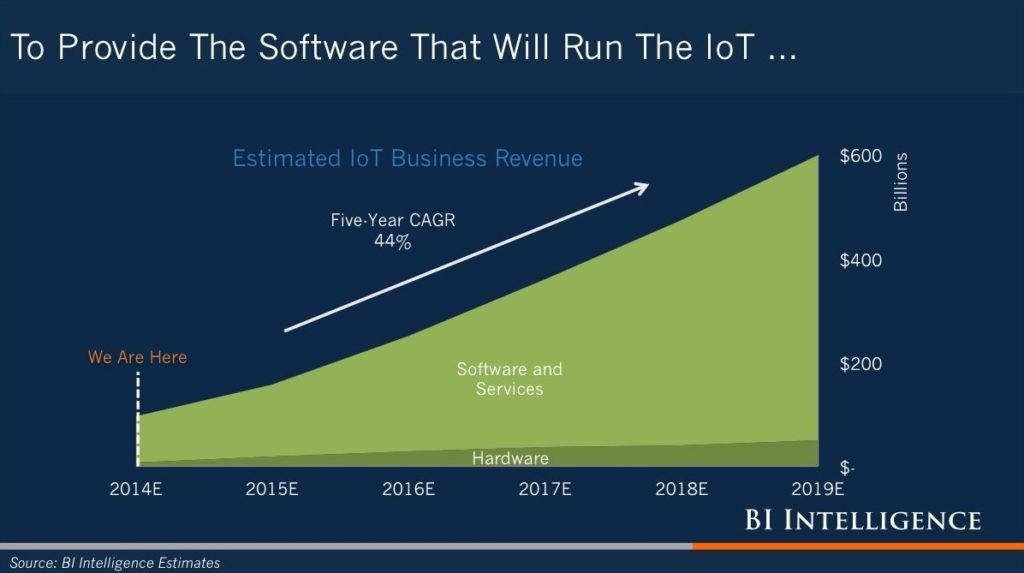 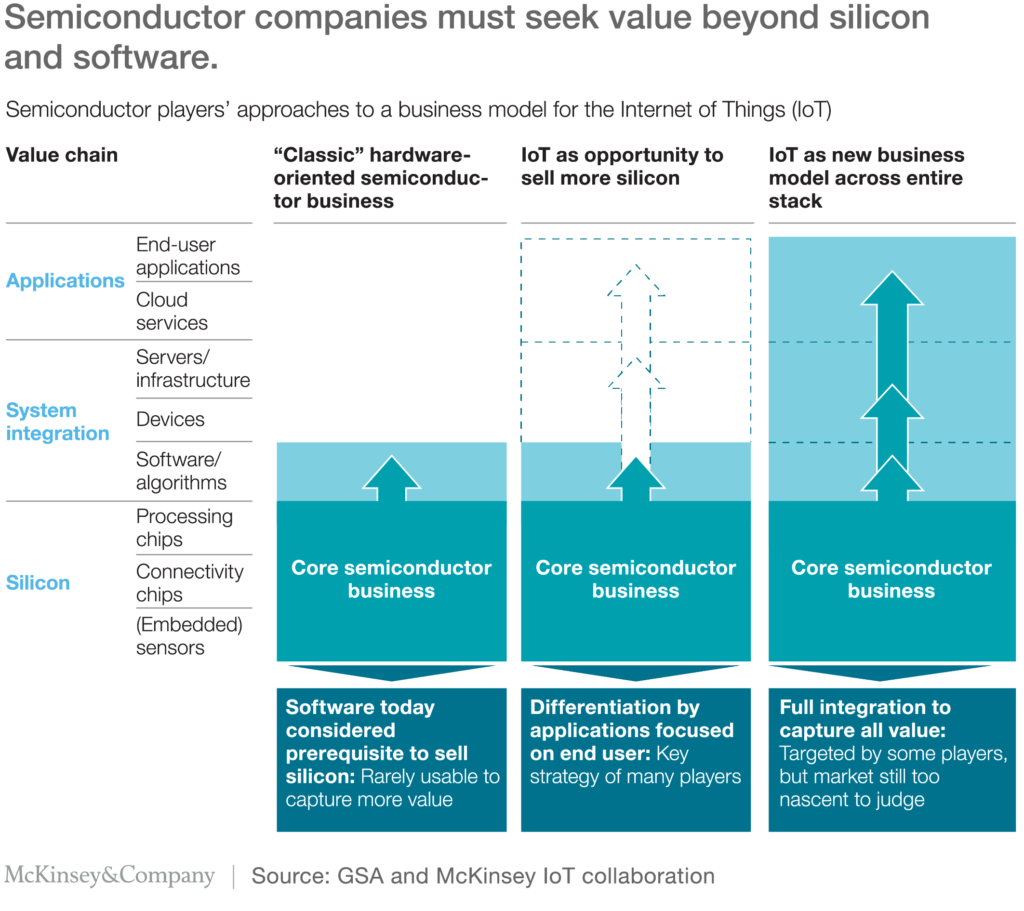 Altogether, Intel pegged the served addressable market of these segments at $15 billion to $18 billion. Having missed out on the mobile revolution, Intel is determined to be an early entrant in the IoT market with the following strategies. 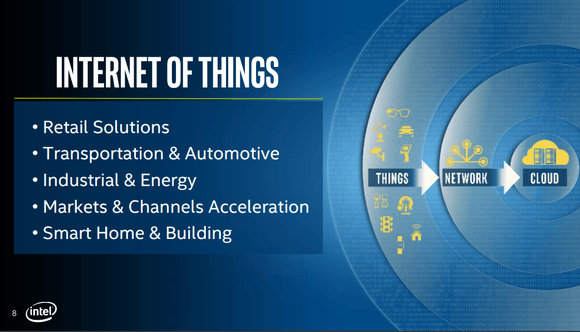 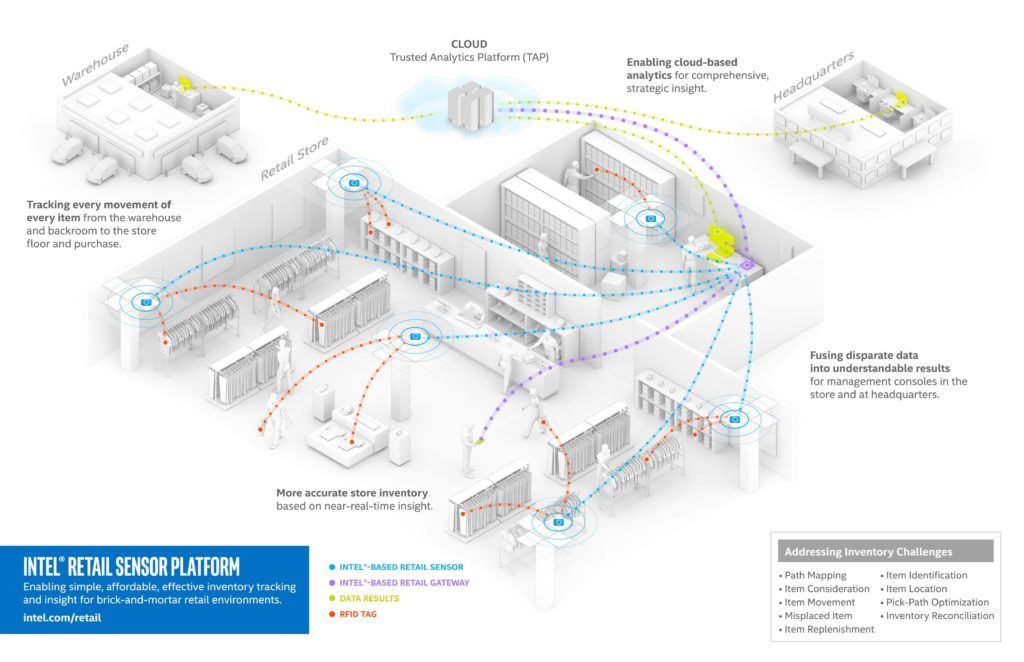 Partnerships and investments with leading data analytics vendors including an 18% stake in Cloudera to promote Open Source Hadoop. To penetrate the extremely fragmented IoT market, Intel also partners with GE, IBM, Accenture, Dell, SAP, and others to make a new Internet of Things platform.

Targeted Mergers & Acquisitions: In the last 24 months Intel has made six major acquisitions aimed at increasing its stake in IoT, cloud, data analytics and Field Programmable Arrays. Intel recently has made numerous acquisitions to build out this segment, including Basic Science, Recon Instruments, Vuzix, Yogitech, Itseez, Arynga, etc. This made Intel Capital to be the most active IoT investor. 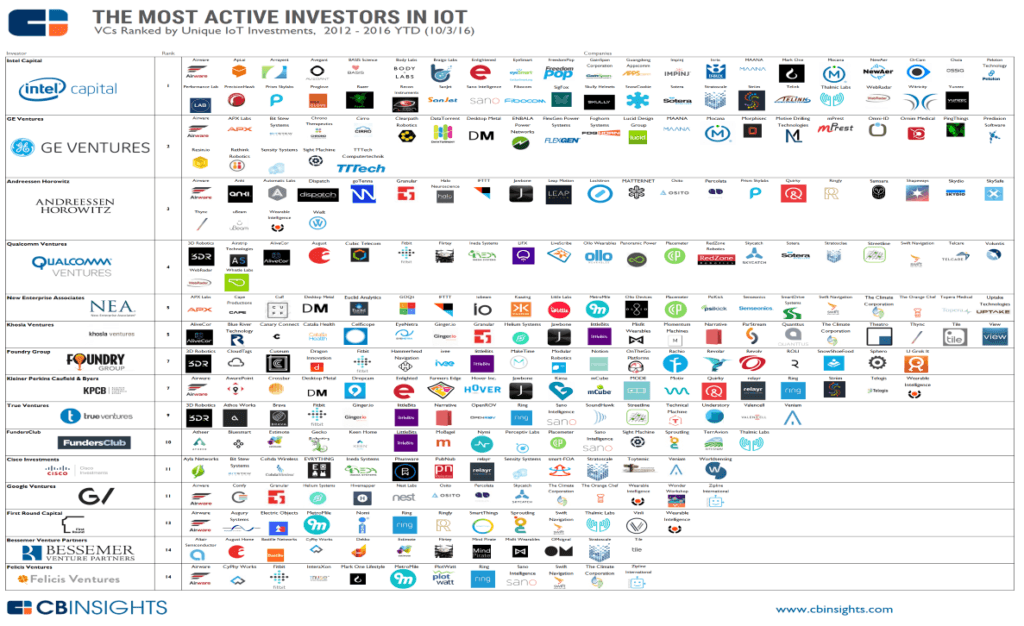 Strong Research and Development:  Intel spent $12.1 billion on R&D in 2015, the most of any chipmaker and it accounted for 22% of all research monies spent by all semiconductor vendors last year.

Patents: The U.S. Patent and Trade Office awarded Intel 2,048 patents in 2015, which gave Intel the Number Nine ranking among all corporations last year.

Restructuring Initiative to Accelerate Transformation: Intel changed its reporting structure and made IoT a stand-alone segment, underlining its growing focus on the business. Intel currently derives approximately 4% of its revenue from IoT and we expect the segment will account for approximately 10% of Intel’s total revenue by 2022.

Intel continues to build partnership across markets and adopts a platform approach to IoT management and control to address not only the intelligent devices market which Intel has traditionally been strong in with its leadership position in sensor manufacturing, but also intelligent system and end to end analytics markets. However, challenges remain as Intel starts to roll out more software and services. Fundamentally, the company lacks domain knowledge to generate insights (value) on top of data collection. In addition, Intel is essentially a manufacturing business, which by nature doesn’t have the right talents, mindset, and culture for software and solution development. Lastly, moving up the value chain also means competing with customers. These are the main reasons why, for Intel, and many other legacy tech companies, IoT hasn’t been growing as fast as expected. Intel must address these three challenges before it can unleash the full potential of future IoT. 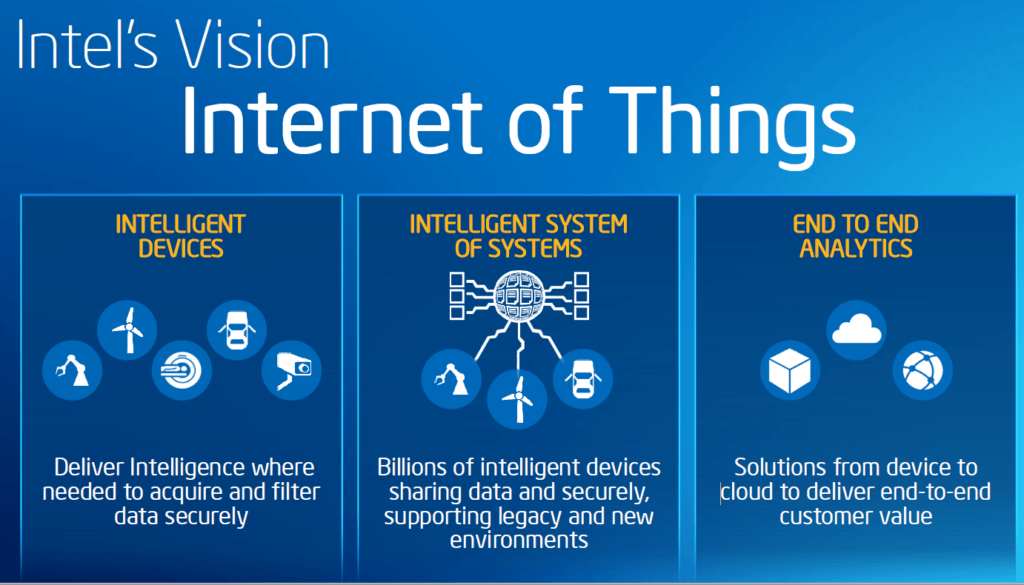 Student comments on Intel’s Big Bet on Internet of Things! Just in Time, or Far Too Late?