The UN recently estimated that the global population will grow from 7.3bn in 2015 to 9.7bn by 2050.[1] However, global food demand is projected to significantly outpace this 30% increase due to rising incomes and a consolidating middle class across much of the developing world such that the commensurate increase in demand is nearer the range of 59% to 98% over this same period.[2] One of the main levers in the global food supply chain is yield on arable land, which climate change is projected to significantly negatively impact.

Potassium fertiliser, specifically potash, is a key driver of agricultural yield but its industry is a complex and export oriented one: it is driven by high extraction costs due to deep shaft mining and increasing transportation costs associated with a highly centralised global supply chain. Potash production occurs primarily in Canada, Russia, Belarus, Germany, the USA and Israel. In contrast, the largest agricultural producers include China and the USA, which account for 17.0% and 14.8% of total global agricultural production by tonnage but import more than 50% and 85% of their fertilisers respectively. For Brazil, Russia and Nigeria, the next largest agricultural producers, that import number rises to 95% as of 2014. [3]

Import dependence breeds a host of related costs across the supply chain, namely currency risk and a higher carbon footprint, which add to the problem the fertiliser is partly solving for. In turn, these costs result in sub-optimal demand levels, a product of both underserved and non-accessible demand where infrastructure is absent (i.e. Africa), while new capacity expansion further pressurised utilisation rates such that the potash fertiliser industry currently operates at 67% of total capacity (Exhibit 1).[4] 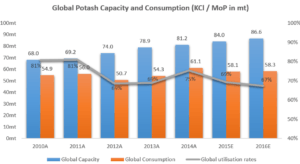 Recent consolidation in this sector indicates one supply chain solution the largest fertiliser producers are considering is integration. Indeed, the Agrium and Potash Corp merger announced in September 2016 was in large part driven by this rationale. But a better, lower carbon footprint option may well be available in the form of a low cost, locally sourced fertiliser. APT[5]is developing what it calls HydroPotash (“HYP”) extracted using a patented technology from an abundant form of potassium known as feldspar, plentiful in fertiliser import dependent regions, namely Brazil and Sub Saharan Africa. Historically, technology has limited extraction to potassium predominantly found in current potash exporters and made feldspar effectively redundant. But now the end cost of HYP to the individual farmer is potentially significantly lower than any other current chemical fertiliser on the market due to lower capital and operational expenditures, including lower transportation costs, water and energy consumption and more limited waste.[6] Unlike the more commonly used potash fertilisers, HYP has a cumulative regenerative impact on degraded soils such that it improves soil fertility over time, as well as stimulating fungi and bacterial populations. Moreover, HYP does not include harmful environmental components such as chlorine found in traditional potash fertilisers.

HydroPotash is partly a response to acute demand pull in global food production but also to the high cost of prevailing fertilisers, in large part a product of existing players’ highly centralised and unwieldy international supply chains. Though industry consolidation seems to be one of the more common strategic routes taken, it does not solve for the reality of either (1) the exogenous pressure of greater climate variability on international supply chains (e.g. extreme weather events[7] creating or exacerbating the bullwhip effect), or (2) regulatory pressure regarding carbon emissions, which global firms are under pressure to comply with. The solution will not be found in the supply chain exclusively but also in the original product, i.e. HYP, among others, that allows for a significantly shorter decentralised supply chain, while delivering higher margins with lower energy consumption.  For the larger industry players, the new normal must be a combination of re-balancing their product portfolio towards innovative technologies such as HYP as well as M&A to integrate supply chains. Many of them are already doing this. The question is: how fast can they move?

Student comments on How to feed 10 billion