As the world acknowledges the scientific consensus on human-induced climate change and the need to reduce carbon emissions in order to limit global average temperature rise to 2°C or lower, oil and gas companies are presented with both opportunities and threats. Understanding that our global energy system is facing a potential transformational shift, Statoil has been able to leverage its Norwegian open-mindset and environmental-focused heritage to be uniquely positioned for this challenge.

Investor risk: The carbon bubble concept [1] states that in order to remain under the IPCC 2°C, up to $20 trillion worth of fossil fuel reserves will need to remain in the ground. Hence, fossil fuel companies’ stock price might be inflated and the broader market could “suddenly” factor this in.

Corporate perception (license to operate) risk: This risk is particularly important to Statoil, as the company is in majority owned by the Norwegian state, which projects itself as being on the leading edge of climate change action.

To address these effects, and create profitable opportunities Statoil has acted on three fronts:

Be vocal for a carbon tax and increase the share of gas production: Compared to subsidies, or cap and trade, a carbon tax would have two main benefits. It would reduce policy uncertainty, enabling long-term investment decisions, which oil and gas companies are used to. It would also push coal out of the energy mix, replacing it by natural gas that generates lower carbon emissions. In addition to that, Statoil has implemented a number of actions to take the lead on reducing its own emissions, in part driven by the €55/ton CO2 carbon tax on oil and gas production activities in Norway.

Increase activity in offshore wind: Since 2009 Statoil has built a strong position in offshore wind, both as a developer and operator of offshore wind projects, and as an innovator, though its Hywind floating turbine solution. Statoil’s move into offshore wind projects has been driven by attractive market returns, and by the fact that it plays into the companies’ strengths. One of the main concerns of investors with regards to oil and gas companies expanding into the Renewable Energy space is the mismatch with their core competencies. Leveraging its knowledge in developing complex marine projects, and servicing platforms in rough sea condition, Statoil has been able to enter this space and dramatically drive down cost. 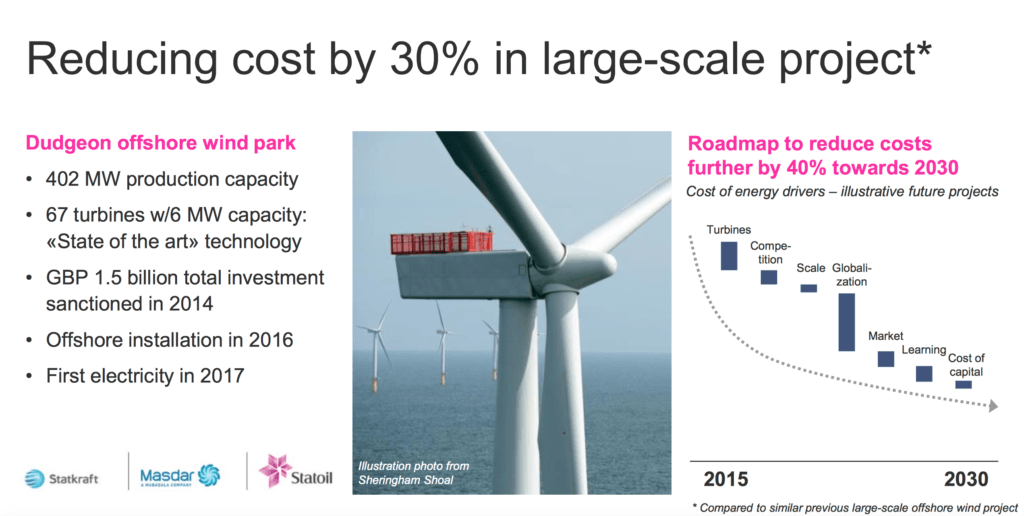 Statoil is also innovating by developing the first offshore floating wind farm (based on a proprietary floating turbine design), to be deployed near Scotland. While currently more expensive than bottom fixed designs, floating turbine designs offer the opportunity to be deployed in many more locations, as well as to be mass manufactured. By being a first mover to offer such a versatile power generation solution, Statoil could potentially reap electricity contracts in future locations. 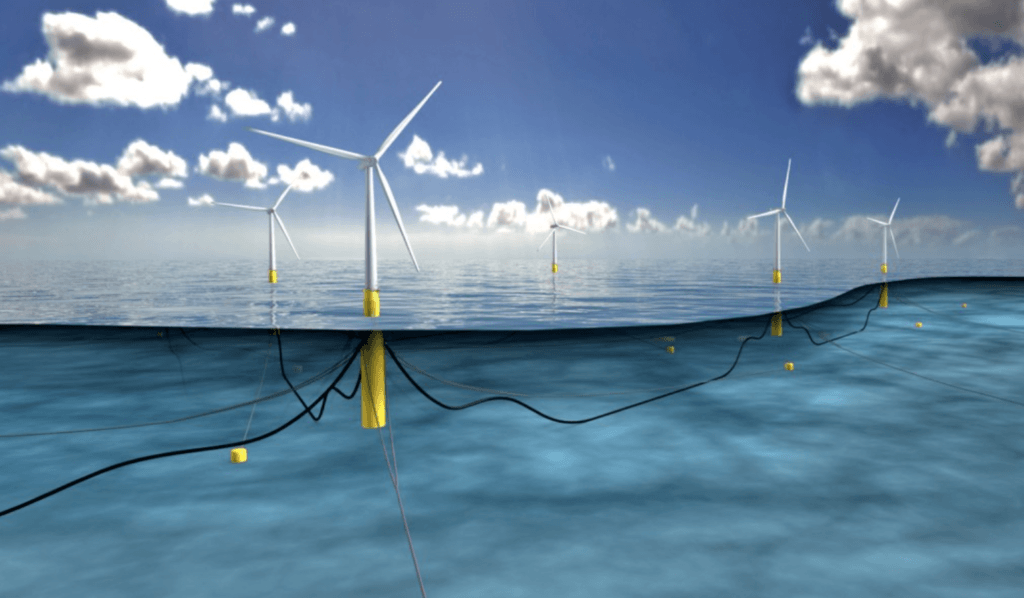 Use Venture Capital as a cost-efficient tool to explore business opportunities in the Renewable Energy space: In early 2016, Statoil established a venture capital unit (Statoil Energy Ventures) entirely focused on investments in clean energy startups [4]. With $200M in funding, Statoil Energy Ventures’ strategic mission is to test and position for future potential growth legs, as well as to explore high impact technologies and business models. The rationale behind this is simple, instead of taking hundred million dollar corporate decisions whether or not to enter a new space in Renewable Energy at scale, why not invest a few millions in a couple of startups to better understand their business model and the potential for profitable growth in their space. Also the future of Energy is hard to predict (Fig. 3), so placing a few bets on potentially high growth opportunities makes sense.

Statoil has been able to navigate the early stages of the transformational shift our global energy system is facing. As the pressure to reduce carbon emissions and production intensifies, Statoil will might need to take more drastic actions. As a relatively high cost producer the company won’t be able to produce oil and gas economically if oil prices are low. Current low oil prices are the result of a structural oversupply, but in the future, low oil prices could be the result of lower demand driven by a carbon tax. In this scenario, Statoil should be ready to close non-profitable fields and progressively shift towards whatever profitable Renewable business it has been able to build (Offshore wind today).

‘Mother of All Risks’: Climate Change and the U.S. Armed Forces

Student comments on How to embrace the shift to a low carbon future when you are an oil company: The Statoil case