Earlier this year, Apple reported a decline in revenues and net income for the first time since its brush against bankruptcy in 1997[1] (Exhibit 1).

The decline was primarily due to disappointing iPhone sales, Apple’s flagship product. Pessimists say that Apple’s best days are behind it and that the company has lost its magic touch[2]. As the market for smartphones matures and sales of iPhones, iPads, and iMacs continue to decline[3], Apple needs to innovate to maintain its leadership in the technology world.

The Push into Smart Homes – HomeKit

In 2014, Apple entered the smart home market with HomeKit – a platform allowing users to control home automation products such as intelligent locks and light bulbs with iOS[5].

When the first smart home products were released, the only way to control them was through vendor-specific software. Phillips Hue smart lightbulbs, for example, needed to be controlled through the Phillips app[6]. This system worked well if you’re only dealing with lightbulbs, but since vendors tend to specialize on a narrow range of products, users with multiple smart accessories had to juggle multiple apps to control their loosely compatible systems.

Apple saw that the value behind smart homes is not in having isolated smart products, but in interconnected devices communicating with each other to improve user’s lives. Imagine your smartphone tells your blinds to open as your alarm is about to go off, while your thermostat adjusts the room temperature to make it just right by the time you get out of bed. HomeKit isn’t there yet, but it takes us a step closer by unifying a breadth of proprietary smart home systems under a single umbrella.

On the user side, HomeKit enables multiple accessories manufactured by different providers to work in harmony[7].

HomeKit rationalizes device organization within the home by grouping and labeling smart devices. The broadest label is the ‘home’ which encompasses all ‘room[s]’ which contain a set of ‘accessorie[s]’ which themselves can provide a range of ‘service[s]’ (Exhibit 2). Users can also create custom groupings such as ‘living room’ or ‘kitchen’. This allows users to issue commands such as: ‘Siri turn on the kitchen lights’[8]. 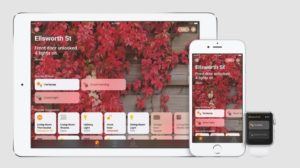 On the hardware side, Apple relies on 3rd party vendors to develop and manufacture HomeKit-compatible accessories[8]. Becoming Homekit-compatible is no joke. Devices must first get certified under Apple’s Made for iPhone/iPod/iPad program. This entails extensive testing to ensure products are on par with Apple standards. In addition, vendors must embed authentication chips in their devices. These chips can only be purchased from Apple. On top of that, every product update requires vendors to send detailed documentation and prototypes to Apple for testing. Finally, HomeKit-compatible products can only be manufactured at Apple-approved factories. Vendors working with non-approved factories must therefore migrate production to comply[9].

Apple’s staggering device certification and approval process is rooted in good intentions. The idea is to run HomeKit locally on every smart device[10] and maintain consistent security standards among all HomeKit-compatible devices[11]. And for good reason, security is key in an era where device interconnection has gotten to a point where a hacker can steal your credit card information through your fridge[12]. But in HomeKit’s case, it comes at the cost of limiting the availability of HomeKit-compatible accessories to consumers. Looking at Apple’s website, it only shows seven approved manufacturers compared to 95 for Nest, a competitor[10].

The Way Forward – More is More

Only 6% of U.S. households have smart devices[13]. Adoption is limited given limited appliance availability, high prices, and limited value[3]. Thus, Apple’s key challenge moving forward is convincing consumers of the value of upgrading to a smart home.

For starters, Apple should stop thinking like a device-maker – running HomeKit on every smart device is costly, time consuming, and drains users’ Wi-Fi bandwidth. Instead, the company should run HomeKit on the cloud. This would allow devices to integrate on Apple’s servers, simplifying the certification process, and reducing product launch lead times for vendors. In addition, Apple would be able to control security standards and run updates at the server-level[10].

Apple should also work with manufacturers to lower prices and make devices accessible to consumers. Price is a key barrier to adoption and smart accessories command a hefty premium over traditional alternatives. A Phillips Hue lightbulb, for example, costs USD 15 at Target[15], five times more than a regular LED lightbulb, and that’s without the USD 150+ Hue control panel.

Only time will tell if smart homes become Apple’s next big thing. For now, the company should focus on the user experience – this means more products, seamless integration, and lower prices.

The Ethics of AI: Robotic Cars, Licensed to Kill

Replicating MPESA: Lessons from Vodafone(Safaricom) on why Mobile Money fails to gain traction in other markets