Growing up, what did you do during rainy holidays or during visits to your grandparents?  In the days before computers and handheld devices, people could entertain themselves by reading books, watching basic television (and VHS tapes), or playing board games.  Before widespread personal technology, Hasbro, the manufacturer of Monopoly, Scrabble, and Trivial Pursuit, dominated the board games industry, but since the emergence of technology, board games have fallen out of favor.  Hasbro has faced significant challenges to its core business from the rise of technology, but luckily the company has adapted, meaning that future generations will be able to enjoy the unadulterated pleasure of Monopoly.

Despite selling over 250MM sets of Monopoly since its inception in 1935[1], Hasbro has not rested on its laurels.  “Board game makers have had to find their footing in a digital age”[2] and Hasbro has navigated the transformation masterfully.  As early as 2006, Hasbro was at the front of the digital revolution, teaming up with RealNetworks, “the leading developer, publisher and web-based distributor of casual games”[3], to bring its board game brands to the modern age.  Jane Ritson-Parsons, president of the Hasbro Properties Group who orchestrated the partnership said “digital gaming is a natural step for Hasbro’s classic properties as the category offers children and adults additional play experiences with our top brands”[4].

In August 2007, shortly after the first iPhone was released in June, Hasbro teamed up with Electronic Arts (“EA”), the makers of FIFA and Madden video games, to “transform the interactive family entertainment landscape”[5].  Not only did EA create the digital platforms for Monopoly, it helped Hasbro expand its digital boundaries.  The partnership paid dividends quickly, with Monopoly topping the Apple app store rankings in 2009[6].  In 2010, EA created Monopoly’s first 3D digital game[7].  In 2013, the two companies signed a four-year extension to their agreement after six successful years[8].

Hasbro has also embraced the increasing prevalence of social media.  In 2013, Monopoly fans “voted on Hasbro’s Facebook page to jettison the poor old flat iron in favor of a new cat token”[9], showing Hasbro’s determination to keep the storied brand relevant with changing tastes.  In 2015, Monopoly offered consumers to have their say in the new “Here and Now” version, resulting in Pierre, SD winning the competition[10].  Currently, Monopoly has 10.7MM Facebook fans, and the brand remains actively engaged with consumers[11].

Despite pushing into digital, Hasbro has remained active in non-digital channels.  Monopoly licensing has extended across multiple industries, from fast food (McDonald’s) to state lotteries.  Furthermore, Hasbro has kept innovating its traditional board game product offering, and interestingly, board games are experiencing a renaissance, with Monopoly being a beneficiary[12].

“Over a billion people have played Monopoly around the world”[13] but Hasbro could do more to ensure the success and longevity of this legendary brand.  Recently at South by Southwest, Hasbro talked about extending some of its products into virtual reality[14].  As gaming methods continue to evolve, Monopoly could take advantage of these innovations in virtual reality to add another dimension to its already large digital Monopoly platform.  How incredible would it be to wear a VR headset and walk the Monopoly board?

Monopoly continues to perform very well across digital platforms with its app one of the top 5 iPhone apps of all time[15].  In the face of changing consumption methods, Hasbro has proactively shifted its business model to preserve Monopoly’s legacy, so much so Monopoly has a 99% global brand awareness[16].  Even today, glancing at Apple App Store’s highest ranked paid apps (as of 11/18/16), Monopoly remains in the Top 10 (Exhibit 1).

Hasbro is playing in both the digital and analogue platforms, which is very encouraging, because now future generations can continue to experience all the joy and learning that Monopoly provides. 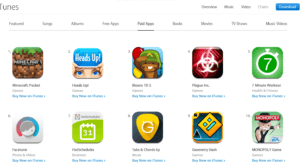 Putting the “New” in “News”: NYT Reinvents itself for the Digital Age

Student comments on Hasbro Is Not Leaving Monopoly to Chance