I, like many around the world, use Google’s email product, Gmail, on a near-daily basis. In fact, Gmail was the world’s most-used multi-platform (e.g., mobile and desktop) email client by traffic in 2017 [i]. Given this apparent success, it may surprise you to learn that according to Gmail’s Product Manager, Gmail just underwent “a ground-up rewrite” in 2018 aiming to “use Google’s AI to make Gmail smarter.”[ii]

This recent reboot raises the question: why rework the most popular email client on earth? The answer has to do with Google’s commitment to using Machine Learning to make process improvements in its suite of products. As far back as 2014, Google’s early interest in Machine Learning, prompted a former employee to assert that “Google is not really a search company. It’s a machine-learning company.”[iii]

At the time, however, this focus was driving the innovation in some of Google’s more tangent businesses (e.g., autonomous vehicles), but has quickly spilled over into Google’s core. Google has recognized that, as a company whose reputation and competitive advantage rests on its expertise in algorithmic computation, Machine Learning is the next frontier for process improvements. Rather than allowing its markets to be disrupted by Machine Learning-driven competitors, Google has recognized the trend toward Machine Learning-enabled products, and chosen to defend its market position by investing and innovating first.

Google has been making investments in Machine Learning across its products, from Cloud to Advertising[iv], and the recent updates to Gmail are simply the latest manifestation of this commitment, presenting themselves to the consumer in time-saving features like Smart Reply[v] and Smart Compose[vi].

As Google looks forward in the short term, it appears a large part of its Machine Learning-based advantage is expected to come via acquisition. Large early investments like its $500M acquisition of DeepMind opened the door for a slew of AI and Machine Learning acquisitions, up to a total of 14 as of May 2018.[vii]

Again, many of these acquisitions mean Google has added features to its core products which will protect the market leadership positions of those products. Google has a well-defined core it knows it must defend, and “through machine learning, Alphabet [Google’s parent company] can better solidify its dominance in search and advertising.”[viii]

In terms of developing its Machine Learning capabilities in the longer term, Google has begun pursuing two longer-horizon channels: R&D and venture capital investment. In terms of R&D, Google has been outspending the majority of tech behemoths, with a differential focus on spending in Machine Learning, evidenced by its recent leadership in AI patents.[ix] 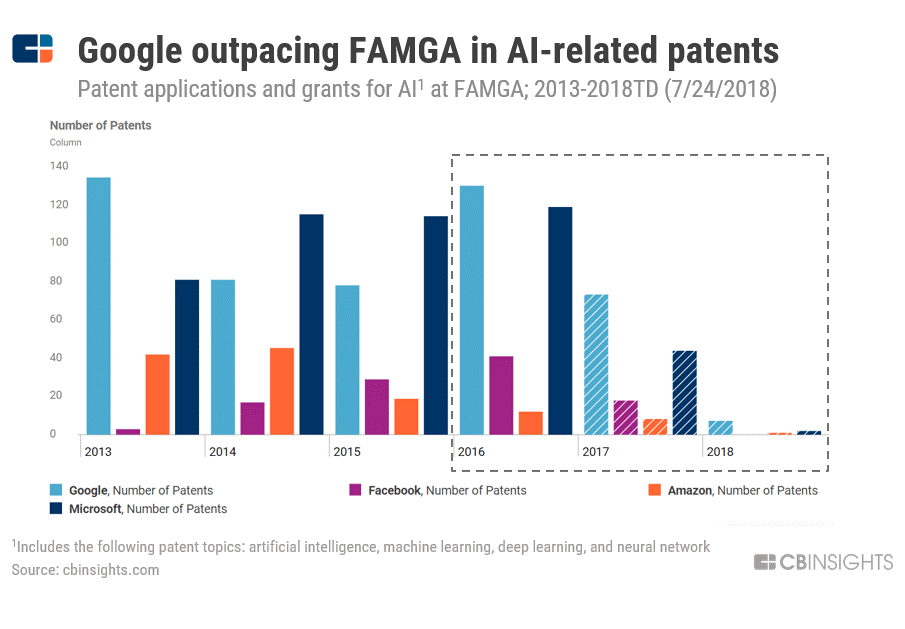 On the venture capital side, Google has launched two AI-only investment funds, Gradient Ventures and Google Assistant Investment Program. The name of this second fund tells the tale; its charge is to invest in Machine Learning technologies which can enhance the quality of the Google Assistant product[x]. Once again, investment is being made in Machine Learning in order to defend and grow one of Google’s most important products, one already in a leadership position in terms of quality[xi].

What Google must continue to pursue as it invests in Machine Learning to generate process improvements are adjustments which add value to the users of the product first, and to the strength of its advertising algorithm second. While its revenue is dependent upon success in an increasingly competitive market for online advertising[xii], the strength of its business relies on the ability of its core products to attract users and drive engagement.

For Gmail specifically, Google should continue its pursuit of product improvements which make sifting through email less of a chore, such as filtering out promotions and spam, additional improvements to Smart Reply and Smart Compose, or drawing users attention to messages he or she will likely want to prioritize. Machine Learning should continue to be helpful across these dimensions.

The most important open question for Google in its investment in and application of Machine Learning is: How can it ensure that the capabilities it builds are sufficiently transferable across products to justify the investment?

As we reflect on IBM Watson, we see an example of an organization and technology which requires meaningful rework and additional investment with each new application[xiii]; this appears to be a significant and potentially expensive risk of these investments.

[i] Litmus: Market Share of the most used email clients as of December 2017, via Statista, accessed November 2018

[iv] “Google Strategy Teardown: Google Is Turning Itself Into An AI Company As It Seeks To Win New Markets Like Cloud And Transportation,” CB Insights (August 2018), CB Insights, https://app-cbinsights-com.prd2.ezproxy-prod.hbs.edu/research/report/google-strategy-teardown#ai

[viii] “Google Strategy Teardown: Google Is Turning Itself Into An AI Company As It Seeks To Win New Markets Like Cloud And Transportation,” CB Insights (August 2018), CB Insights, https://app-cbinsights-com.prd2.ezproxy-prod.hbs.edu/research/report/google-strategy-teardown#ai

Creating a “Factory of the Future”

Student comments on Google and Gmail: Machine Learning for Defense, Not Disruption