Eastman Kodak was once the leading film producer in the world, with 80% market share compared to its next closest competitor, Japanese owned Fujifilm, whom trailed with a mere 17%. [8]  In the 1980’s, “both Fujifilm and Kodak knew the digital age was surging towards [them], but the question was, what to do about it.” [2]  Each company took a different approach to addressing digital transformation and the results were significant: in 2012, Kodak filed for bankruptcy, sold its patents, and exited its legacy businesses while Fujifilm grew into a $20.8 billion revenue company.  [1] [4]  While Kodak has become a classic example of failed innovation in the digital age, the keys to Fujifilm’s survival are lesser known.  This piece will focus on how Fujifilm changed an element of its business model to adapt to and ultimately leverage the digital revolution.

Customer Value Proposition.  “It’s not the product that creates value but the value proposition.” [6]

Fujifilm originally created value for customers by delivering quality photography film at a fair price via convenient retailer locations.  Compared to Kodak, Fujifilm differentiated itself by offering comparable film products at a significantly cheaper price to consumers.  But in the 1980’s, Fujifilm realized photography would be going digital and faced a decision regarding what strategy to pursue. [3]  How did Fujifilm approach this problem and what did they decide?

Scott Anthony, author of The Little Black Book of Innovation, recently published three questions businesses should ask themselves when considering a digital transformation.  Though written 20+ years after Fujifilm’s dilemma, they provide an excellent lens for understanding how Fujifilm adapted its value proposition:

What business are we in today? Where Kodak remained focused on the film industry, Fujifilm questioned what business it was in.  Was it in the camera film business or the imaging business? [1]  After recognizing it could leverage prior expertise in other industries, Fujifilm redefined itself as both an imaging and information technology company.  As early as 1983, Fujifilm demonstrated this expanded position when it produced the world’s first digital x-ray imaging diagnostic machine, the FCR. [9]  Fujifilm’s experience led it to pursue three lines of effort: Imaging, Information, and Document Solutions. [9]  Figure 1 clearly depicts Fujifilm’s accelerated transition from a company dependent on revenue from photo film to an imaging and information technology company. 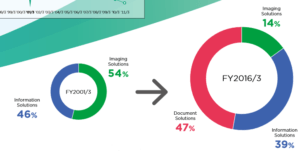 (Note: “Imaging Solutions” in the figure above refers to Fujifilm’s camera and photographic film segment)

What new opportunities does the disruption open up?  As it entered new industries and material/ computer technology advanced, Fujifilm’s opportunities grew.  For example, what began as innovation in x-ray technology, transformed into a $3.8 billion business segment, with advancements in endoscopes, medical-use picture systems, and pharmaceuticals. [9]  Figure 2 depicts Fujifilm’s industry mix as of its 2016 Annual Report. 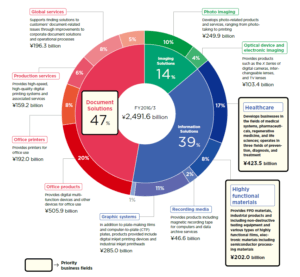 What capabilities do we need to realize these opportunities?   As Fujifilm expanded its value proposition and identified new customer problems, the company recognized certain capability and knowledge gaps.  In the 2012, for example, Fujifilm acquired SonoSite, an American ultrasound equipment maker, and went on to develop leading point of care imaging products which have garnered top awards. [3]

Recommendations.  Innovation is an ongoing and iterative process that will quickly stagnate in the absence of a long-term strategy and investment.  As Fujifilm continues to compete in the post-digital age, the company should consider the following recommendations. 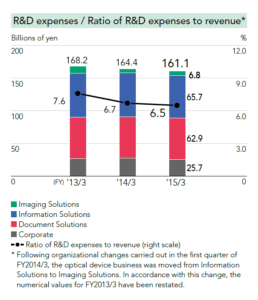 Wordcount: 797 without citations or figures.

[6] Stähler, Patrick, “The offer is only one building block to fulfill the value proposition,” June, 16, 2015, http://blog.business-model-innovation.com/2015/06/product-is-not-the-value-proposition/, accessed November 2016.

Keeping up with the Times at the New York Times

Macy’s in the Digital Age