“We will make sure the law is carried out, or else the company will stop working in Russia, as regretfully happened to LinkedIn. No exceptions will be made.”

Over the last two decades, few innovations have aided in the rise of globalization as much as the proliferation of the Internet. Among the biggest beneficiaries of the new digital economy are U.S. tech giants like Facebook – now one of the top ten largest companies in the world by market cap [2] – which earns the bulk of its revenue from advertisements it serves online to its global audience of over 2 billion monthly active users [3]. However, recent worldwide trends towards isolationism threaten the way Internet companies store their data, and are forcing Facebook to answer some tough economic, strategic, and political questions.

The Rise of “Data Protectionism”

Over the last few years, countries have begun to implement “data localization” laws, which require all personal data on their citizens to be stored in data centers located within their borders [4]. Countries enact these laws to attract investment, give an advantage to local competitors, and protect their citizens from security and surveillance risks associated with their data being held outside of their jurisdiction [5]. By late 2015, a number of countries had implemented some level of data localization laws [6]: 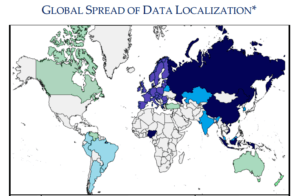 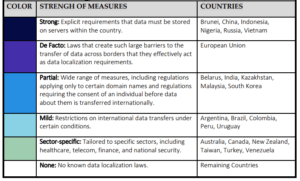 A particularly rigid law went into effect in Russia in 2015 and “requires ‘personal data operators’ to collect, store, and process any data about Russian users in databases inside the country” [7]. The law (and others like it) presents a particularly thorny challenge for U.S. tech companies.

Data Center Operations and the Cost of Compliance

Facebook stores and manages most of its proprietary data internally, and currently has or is building 11 data centers around the world. While 3 are located in Northern Europe, the rest are all located within the U.S. [8].

Each data center requires a major investment of Facebook’s resources. Their most recently announced, in Virginia, will cost $1 billion to build [9] and Facebook’s cost of revenue, which consists primarily of data center-related costs, grew 36% in 2016 and represents 25% of Facebook’s total expenses [10]: 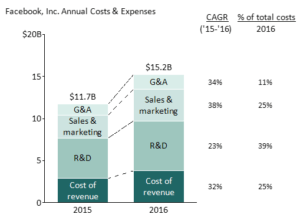 Building a data center in Russia could also come with added costs associated with investing in a less developed local infrastructure and implementing new internal processes to identify which of its users are Russian citizens and ensure their personal data is all routed to and stored in the appropriate facility. The investment may not be a one-time cost either, as it could set a precedent for other countries considering adopting similar laws.

Aside from pure economic considerations, Facebook also has to evaluate the significant political and PR risks associated with complying with Russian government requests on data privacy, in light of the current political climate and controversy surrounding Facebook’s inability to prevent Russian government-backed actors from using its platform to influence the 2016 U.S. election [11].

Facebook’s initial response to the law was to attempt to negotiate terms with Russia in private, and it was successful in getting Russia to push back any planned inspections of its local data centers until 2018 [12]. However, other U.S. tech companies have been forced to pick a side, with Uber, eBay, and Apple agreeing to comply [13].

Meanwhile, LinkedIn refused, and Russia responded by banning the website nationally, a move that it is citing in threats to Facebook as it amps up the pressure to comply (see Aleksandr Zharov quote at top). With Facebook’s current average revenue per European user at $6.85 [14], losing access to Russia’s 144 million people could cost the company almost $1 billion in missed run-rate revenue.

For Facebook, the aforementioned costs associated with compliance are too great to accept. Storing all data locally would not only signal capitulation to the Russian government at a delicate time for the company, but would also leave the data particularly vulnerable to being intercepted by the government itself. Facebook prides itself on its protection of user privacy and has tussled with the Russian government before over demands to turn over user information. If that information is stored locally it will be much more difficult for the company to maintain control. Though the downside of losing access to Russia’s population is significant, it may be somewhat mitigated by users bypassing local regulations and accessing the site over VPN, as has become common in China.

On the other hand, Facebook’s mission statement is to “bring the world closer together.” Wouldn’t leaving Russia altogether achieve the opposite effect, taking away the opportunity for Russians to engage in meaningful online interactions with other Facebook users around the globe, thereby aiding in the isolationist, anti-globalism movement that caused the law to be enacted in the first place?

What can Facebook do to further its mission and its business goals without compromising its values in Russia?

Blockchain for Shipping -Is it Really Revolutionary?-