Exxon Mobil Corporation (NYSE: XOM) is the world’s largest publicly-traded oil and gas company. For perspective, Exxon’s revenue, which fluctuates significantly with the underlying commodity prices, has ranged from about $240 to $430 billion in the last five years – Nigeria, Africa’s largest and the world’s 26th largest economy, has an estimated 2016 GDP of $415 billion. Exxon generates revenue from three sources: exploring, developing, and producing oil and natural gas; refining raw materials into fuels and lubricants; and, manufacturing commodity and specialty chemicals. The Company’s resource base includes 100 projects across six continents and exceeds 91 billion oil-equivalent barrels (BOEB), or approximately three times total global petroleum consumption. Its production base includes assets spanning 24 countries across the globe with 25 BOEB of proven reserves.

Given its size, profitability, and industry, Exxon Mobil has long been the posterboy for corporate greed and evil, influential lobbying, and climate change denial. Some critics claim that Exxon began researching the human impact on global warming as early as 1977 and by 1982 had concluded that climate change would ultimately have devastating consequences for the environment. Many will remember and associate the Company with its Valdez supertanker which ran aground and spilled 11 million gallons of crude oil off the coast of Alaska in 1989, polluting 700 miles of shoreline. Others will accuse Exxon of denying climate change for decades, for funding academic naysayers, and even for influencing George Bush and the U.S. government against implementing the Kyoto Protocol. While much (or all) of this may be true, Exxon has made some modest progress in recent years and has the potential to be a leading player in the mission to reduce humanity’s impact on the environment and the emission of greenhouse gasses.

In March 2014, Exxon Mobil issued a report outlining the potential for new climate change legislation to significantly impair the value of its assets (reserves and resource base). Exxon, like many oil companies, uses a shadow price when evaluating new projects in order to estimate the potential profitability at various tax levels (carbon tax). Exxon reported using a shadow price of $60 per ton of CO2 by 2030 and $80 per ton of CO2 by 2040, well ahead of existing carbon tax levels (many countries have none at all). The report represented a notable acknowledgement of the global importance of climate change, and implicitly, where the oil giant expected prices to go. Given Exxon’s internal view of where carbon taxes are headed over the long-term, it seems logical that the Company has begun investing behind infrastructure and technology to reduce its emissions and minimize its impact on the air, water, and ground. In 2014 and 2015, Exxon spent a combined $11.8 billion on environmental initiatives while recording $1.15 billion in environmental liabilities. The Company expects to invest a further $5 billion in environmental initiatives in each of 2016 and 2017. As a result, Exxon has managed to reduce its overall emissions while continuing to grow its capacity. 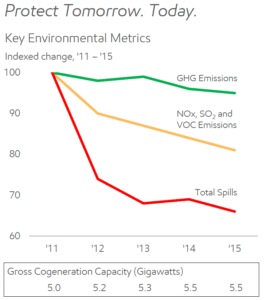 The UN Convention on Climate Change, held in Paris this past December, brought about a global agreement among nations to commit to take action against climate change. This past June, in a move some argue as strategic, Exxon officials voiced their support for a carbon tax in the United States and the Company’s plan to actively push for such legislation, a departure from their previously passive approach.

While Exxon’s investments in environmental initiatives and push for a U.S. carbon tax may pull the whole industry in the right direction, is it enough? After all, Exxon’s own projections have oil and gas capturing the majority of energy demand growth and making up ~60% of global energy demand by 2040. Meanwhile, the use of coal, the most pollutant source of energy, is not expected to decline. 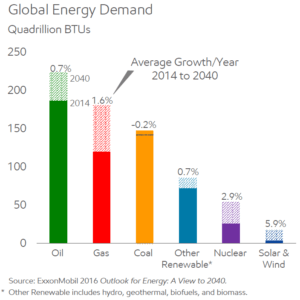 Should Exxon begin a transformational journey, exploring opportunities beyond its traditional core in oil and gas, or are emerging technologies and renewable energy in better hands with smaller, more entrepreneurial and nimble organizations? Perhaps one could argue either side, but few energy companies have the scale (~$400Bn enterprise value), the government influence and access (producing in 24 countries), or the financial resources (>$30Bn in annual operating cash flow) of an Exxon Mobil. Exxon has the opportunity to do more than just pull the oil and gas industry in the right direction. By beginning to invest heavily behind renewable energy technologies and evolving into a true global diversified energy supplier, Exxon has the potential to entirely shift global production and consumption patterns, and to change the world of energy as we know it.

Ratings agencies and climate change: The next financial crisis?

Student comments on Exxon Mobil; Oil and Gas Giant or Much More?