Enron was highly ineffective in aligning their business and operating models. Their bankruptcy in December 2001 represented the collapse of the 7th largest firm in the country and the largest bankruptcy ever at the time [1]. Although this outcome was driven by fraudulent accounting, an analysis of the firm’s operating model will help shed light on how this fraud occurred.

Historically, Enron was an asset operator, providing electricity and natural gas to end-consumers through the use of pipelines, power plants, and other energy-related products. With de-regulation occurring throughout the 1980s, Enron saw an opportunity to pursue an “asset-light” model, where they could divest most of their physical assets and instead focus on trading commodities matching buyers and sellers of natural gas and electricity. This strategy was initially very successful as they grew revenues from  ~$9B in 1995 to over $100B by 2000 (Exhibit 1).

With a history of working in the energy sector, they were uniquely positioned to extract value from this new trading marketplace. Their value proposition was three-fold as noted by Stanford professor Frank Wolak: “1) they were an industry leader in advocating energy industry restructuring in the US, 2) they had more worldwide experience in the competitive electricity and natural gas markets, and 3) a unique ability to recognize arbitrage opportunities between the new markets and pre-existing markets [2].”

Commodity trading markets played a vital role in the economy by helping resolve imbalances between supply and demand. Enron was uniquely positioned to be a leading intermediary in this new market if done properly. Support of Enron’s business model was highlighted in this NYT article written in January 2002, highlighting the opportunity in virtual trading:  ‘Despite Enron’s collapse, its goal of merging the best thinking in energy, finance and information technology as an online commodity trader still garners respect.”

As Enron transformed from an asset operator to an “asset-light” model, there were several flaws in its capital and labor management.

Enron had no checks in place on capital spending projects in regards to size or relevance. There were multiple examples where the company spent billions of dollars irresponsibly or with little regard to risk and return. “Enron also betrayed its success, Mr. Launer said, by throwing money at ventures that failed to generate cash flow. For example, Enron spent around $2 billion on its network capacity, or bandwidth, exchange, which never turned a profit [3].” The company also spent billions of dollars building power plant assets in India, which never turned a profit as the citizens could not afford the price of the electricity. Both of these projects show a disconnect from their asset-light business model of electronically trading natural gas and electricity.

Enron was able to hire some of the best talent in the industry due to their reputation as an innovator and best-in-class company. Instead of utilizing this labor pool, they institutionalized very aggressive human resource policies. One such policy was the Performance Review Committee (as seen in Exhibit 2) which required a forced rank of all employees. They then fired the bottom 10%, creating a cut-throat culture that required significant risk taking and misaligned incentives. Employees were willing to “step on each other’s throats [7]” in order to keep their job and get a bigger bonus. This model often drove employees to take on risks to drive profits, which went against their business model focused on hedging risks.

A lack of accounting controls is ultimately what drove Enron to commit fraud. Simple things such as producing a balance sheet and cash flow statement were not being done. When questioned about this, the CEO responded by calling the analyst an “a**hole [7]” (link here). The company was also allowed to use aggressive “mark-to-market” accounting policies which allowed them to recognize all possible future revenue of long term contracts up front without recognizing the costs or the possibility of failure. Finally, the company used special purpose entities in order to hide their debt and realize profits that otherwise would not be possible [4]. All of these transactions made it very difficult to truly understand what was going on at the company or the viability of the new business model.

Enron’s values statement read: “Respect, Integrity, Communication, and Excellence… [it goes on to say] Ruthlessness, callousness, and arrogance don’t belong here [5].” Enron seems to have embodied the last three characteristics much more frequently than they did the first four values. Commodities trading could have been a sustainable business model for Enron had it not been for their unsustainable operating practices of poor capital allocation, terrible hiring procedures, and illegal accounting practices. Enron is the epitome of a highly ineffective organization. 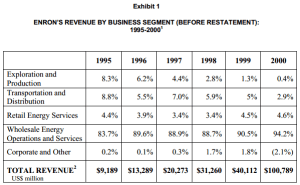 [4] The Rise and Fall of Enron: http://www.journalofaccountancy.com/issues/2002/apr/theriseandfallofenron.html