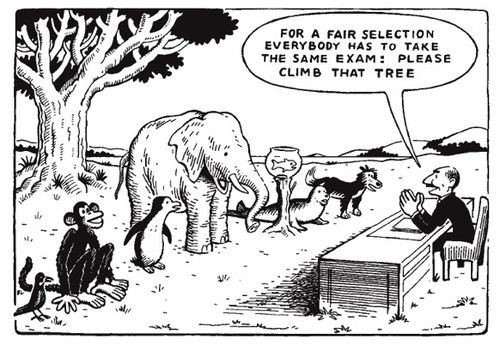 NYC’s crusade against the “conveyor belt”

Education has traditionally been approached using a “one size fits all” model, wherein students are subjected to the same teaching styles and evaluation methods irrespective of their ability or interest.[1] Given that different students have different learning styles,[2] have different strengths and weaknesses, and receive varying amounts of parental support at home,[3] does it make sense to throw all students onto the same “conveyor belt”[4] of education and expect the same outcomes? According to the New York City Department of Education, the answer is a resounding “no.”

In 2010, New York City’s Department of Education launched iZone, a community of over 300 schools to test innovative classroom methods and technologies with the goal of “designing schools around the needs, interests, and motivations of individual students, by personalizing rather than standardizing the model of schooling and learning.”[5] One of the most well-known initiatives emerging from the iZone is the School to One program.

All eyes on the laptop screen

Under School to One, students are placed in a classroom of 80 supervised by four teachers, four graduate students, and two high school tutors. In contrast to the traditional model of listening to a teacher lecture at the front of a classroom, students receive a personalized “playlist” curriculum that they work on laptops to complete individually and in small groups. Students are given quizzes, games, and worksheets throughout the day, and end each day with a quiz that is then used to determine the following day’s “playlist.” Teachers monitor student performance in real-time and intervene and support when needed.[6] 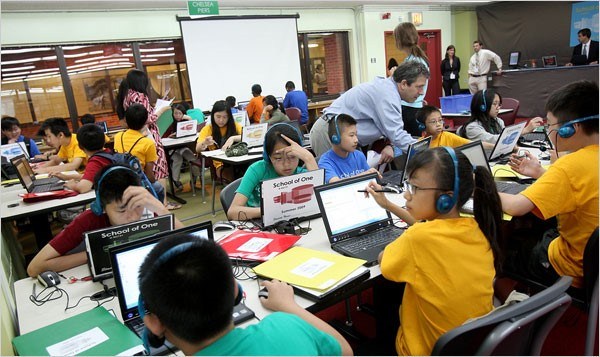 Studies on the School to One model for mathematics found a 47 percent increase in student achievement relative to the national average in the second year of the program. Importantly, the largest gains came from the lowest performing students.[7] The results were promising enough to catapult the School of One to one of TIME Magazine’s Top Inventions of 2009 as a “learning [model] for the Xbox generation.”[8]

Despite the promising results and hype, perceptions toward the program have not all been positive. A member of the NYC Public Schools Parents group visited a School to One program in Chinatown and reported the following:

“I watched as one girl, seemingly in a trance, looked at the screen, and hit A, B, C, D keys in turn, until she got the right answer to a multiple choice question and moved onto the next one. Sadly, no adult but me seemed to be paying any attention to this student to make sure she was trying to think the problem through… what I saw was not personalized instruction and engagement, but many confused and somewhat dazed students, and much disruption.”[9]

Despite the push-back, the School of One program has since expanded to 28 schools nationwide[10] – though the subsequent media coverage has been curiously scant.

The jury is still out on whether initiatives such as School of One can credibly replace the traditional lecture-style method of teaching, so it is clearly too early to claim victory. That said, the NYC Department of Education does deserve a great deal of credit for its willingness to partner with fledgling upstarts to test innovative ideas in a statistically rigorous way, bringing both the public and private sectors together towards a united cause.

I am, however, still wary of three potential issues:

Given that members of Generation Z are already digital natives, should we not focus on helping them develop better non-cognitive social skills? Computer literacy is already a given for this generation; do they really need to spend even more time hunched in front of a computer, rather than interacting with their teachers and peers?

Studies have shown that, in environments where homework is assigned, the extent to which a student receives academic support at home is critical to the student’s success.[11] What happens after a student turns off their laptop and goes home? Will a technology-oriented academic experience lead students from low socioeconomic backgrounds to fall further behind their peers who can afford to have a laptop and Internet connectivity at home?

To what extent is School to One simply a repackaging of textbook content in a more engaging way – rather than a total re-imagination of what ought to be taught in our schools? Studies are increasingly showing a shortage of critical thinking, oral communication, teamwork, and leadership, among other “soft skills” among workforce entrants.[12] Since these skills are not currently taught in schools, perhaps we should not only reconsider how we teach, but also what we teach. Introducing laptop-based exercises addresses the how, but I am not convinced it addresses the what.

Student comments on Education: One size no longer has to fit all