The major energy-producing companies in the world have traditionally relayed in two main sources to supply of electricity to its customers: natural gas and coal [1]. In the US alone, coal is the second most sought source of energy, accounting for the 30.4% of the total energy produced and only surpassed by natural gas as shown in figure 1 [2]. However, due to several factors such as tighter environmental regulations on coal-fired plants [3], disbelief that a coal-based economy reduces poverty [4], and the increasing scrutiny by politicians pushing for carbon taxes [5], coal demand and prices have drastically dropped 70% since 2008 [6]. In addition, the growing use of renewables has aggravated the situation of coal mining companies, forcing them to become more efficient in times of continuous shrinking profit margins. 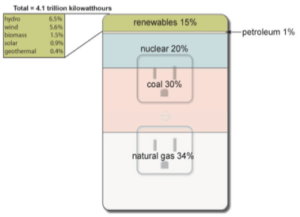 Continuous changes in environmental laws have pressed power plants to impose extra measures on mining companies such as Drummond. Government officials assure that those measures create incentives for coal-dependent industries to innovate and reduce their coal consumption through the adoption of lean manufacturing practices and developing more efficient processes [8]. In a similar note, coal mining companies are also forced to identify underutilized resources, detect bottlenecks and minimize inefficiencies across their supply chain to reduce their operating expenses [9].

Drummond has been operating the most productive open-pit coal mine in Colombia since 1986. The abrupt terrain has made Drummond’s supply chain very complex, which includes extraction of the coal, loading, and transportation in the mine using large loaders and trucks to coal stacks, followed by inter-mine transportation using conveyor belts prior to loading the coal into a cargo train. Once the train arrives at the port, another conveyor belt transports the coal to a locking dock that deposits the coal into a ship as illustrated in figure 2. 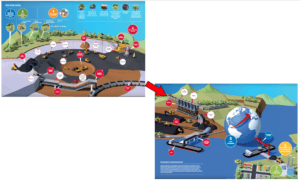 The major problem faced by the company is the continuous unexpected stops in operation and fines charged by the Colombian government because of the environmental impact that the coal dust causes while it is transported from the mine to the port. Surrounding communities are affected directly when the train passes by their houses spreading hazardous coal dust and indirectly with coal deposited at the bottom of the ocean when it is loaded on ships. Every stop caused downstream creates large upstream disruptions to Drummond’s customers, who expect deliveries on time. Failure to comply with contracts result in fines assumed by the mining company. Also, the variability along the supply chain makes impossible for engineers to organize contingency plans or even schedule maintenances, reducing the labor utilization and capacity of the Pribbenow mine [11].

From internal company-wide meetings and external debates with the surrounding communities and local governments, Drummond’s management decided that stopping the operation was not feasible but reaching operating limits as soon as possible was imperative. To address this critical problem, Drummond’s management invested US$360 Million in building a new direct ship loading system to accomplish several goals [12]:

In order to fully address the interplay between regulations dictated by climate change, low demand and declining prices of coal, it is important to incorporate those factors to create a new global strategy of the company. Starting from modifying the company’s mission from “exploration, mining, transportation and export of coal” to a more inclusive and relevant to today’s changing economic times that affects their business, including sustainability practices and an always-improving mentality.

In another front, leveraging technology to minimize environmental impact as well as increased efficiencies in the extraction and transportation stages will be critical to compensate for the unpredictability in the regulations.

In addition, as already initiated by other governments [13], the coal industry can be transformed into a more responsible, transparent, and profitable business when each member of the supply chain embraces the goal of respect for people and for the environment.

In industries where the economic benefits seem to outweigh the environmental consequences, how should leaders take into account environmental impact when assessing investments that are critical for the viability of a business? Should they incorporate a moral component in the equation when analyzing such projects? If so, how much weight should they allocate to such corporate responsibility factor?

Made in America? Ford Motor Company’s Battles with Isolationism

Starbucks: Growing Sustainability One Cup at a Time

Student comments on Drummond Company: Will an old industry be able to adapt to new climate regulations?