Earlier this year, Yuxi city seized 19 tons of smuggled chicken feet[1], a popular dish or snack in China. China was the largest US export market for chicken and chicken parts in the late 2000’s and the demand has since created a black market for the product. Chicken feet are a very desirable export for the chicken industry; they can be sold for a high price in China and almost worthless elsewhere. The poultry industry is low margin and chicken feet are a big driver of profitability; Carlos Ayala, VP of International at Perdue Farms, says that without chicken feet, many chicken companies would be out of business[2].

Georgia, the largest chicken producing state in the US, has increasingly felt the impact of isolationism on international trade policies on its largest segment in agriculture; the poultry industry and related industries provide Georgia with over 104,000 jobs[3]. China “was a $750 million market just a few years ago, and now it’s essentially zero. It was one of our most important markets,” says Jim Sumner, president of the USA Poultry and Egg Export Council[4].

In 2009, China implemented tariffs of over 100% on chicken from the US, supposedly in response to complaints from Chinese chicken farmers, who claimed the U.S. was selling the chicken feet into China at below-market cost[5]. However, the tariff has widely been interpreted as a response to the US 35% tariffs on Chinese tires[6]. Jim Sumner argued last year that US chicken farmers were the innocent victims in this political fight, “Unfortunately, U.S. poultry is a big target, and we have simply gotten caught in the cross fire”[7]. In January 2015, China banned poultry and parts from the US because of detection of high pathogenic avian influenza. As an update, in 2017, a trade agreement between the US and China allows Chinese companies to export cooked poultry products and import liquified natural gas from America in exchange for allowing credit rating services and beef in China, a move that the US poultry industry hopes opens the Chinese poultry market in the future[8]. From the fluctuations in the below chart, it’s clear that Georgia needs to proactively address this trend. 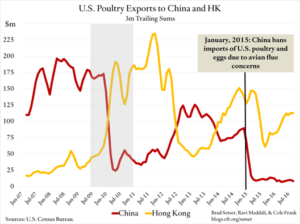 Georgia has taken measures on its own. Poultry companies have challenged the Chinese trade barriers to the World Trade Organization twice[9]. Georgia is also home to the USA Poultry & Egg Export Council and the Council has evolved from a promotional organization to one that focuses more attention on government policies affecting trade[10]. As a longer-term strategy, since 2009, Georgia has also focused on building trade and political relationships with China. In his seven years at Georgia’s Department of Economic Development, Commissioner Pat Wilson has been to China 16 times[11], Georgia Governor Nathan Deal traveled to China in 2011 and 2013, Atlanta Mayor Kasim Reed led a trade mission to China in 2012[12]. As a sign that they are successful in these efforts, in 2014, Georgia was the only U.S. state invited to showcase a garden at the 2014 Qingdao International Horticultural Exposition[13]. Governor Nathan Deal has even proposed in his budget for fiscal year 2018 funding for economic development outreach in China[14].

I believe that Georgia must do more to influence US national politics to combat these trade issues while also investing by expanding poultry business into China directly. On the political front, for example, a one-woman stand by representative Rosa DeLauro, Democrat of Connecticut, whose home state is not a stronghold for the poultry industry, was holding up the 2017 deal to allow Chinese cooked chicken from entering the US, a deal that many believe is crucial to China opening its market for US exports[15]. This, from a Georgian perspective, is unacceptable, and building the political clout to prevent this is necessary. In the longer term, Georgia should consider partnering with China to develop the chicken industry within China, rather than focusing on operations in the US and then exporting to China. This will help reduce political risk in international trade.

In conclusion, the potential isolationist movement in the US poses a risk to Georgia’s chicken industry via trade war. Although Georgia has invested in developing economic and political ties with China, it needs to also focus on politics within the US system and moving more of its supply chain operations directly into China to mitigate political risk. Can constituents of these industries and this state play a larger role in the political trade decisions that are being made at a national level? (797 words)

Student comments on Don’t count your chickens before they hatch: The impact of US-China international trade relations on the Georgia chicken industry