Climate change is a frequent topic in political debates, with liberals typically more environmentally concerned than conservatives.[1] However, do liberal political parties adapt their environmental policies to maximize their popularity, sometimes with a position that can negatively impact global warming?

Pushing renewable energy first and then supporting the coal industry, the PSOE[2], – Spanish biggest left-wing political party –  has used climate change to maximize voter support, not necessarily in the best interest of the environment. 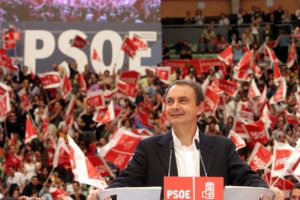 During the 2004 Presidential Election campaign, PSOE’s central claim regarding energy policy was to promote renewable energies[3]. This attracted many “green” votes and Zapatero[4] won the Election. In 2007, Zapatero approved new incentives to subsidize the installation of new renewable capacity, causing a boom in wind and solar. 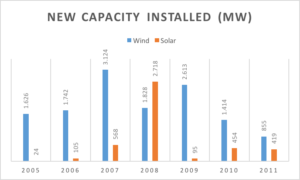 Source: Own elaboration based on data from IDAE[5] 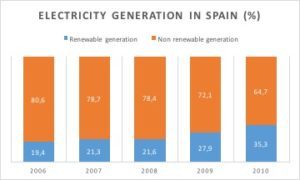 Source: Own elaboration based on data from REE

Thermoelectric plants burned coal to generate electricity. This coal was mainly extracted from mines located in the north of Spain, where PSOE had a strong basis of voters’ support.

When the introduction of renewable energies started to reduce the need of thermoelectric generation (from 26% to 7% of electricity demand in just three years[7]), the mining companies tried to export the Spanish coal, but it was less competitive than international standards due to its high price (despite EU subsidies to national coal) and higher contamination standards (containing 1-5% of sulfur vs 0.5% standard[8]).

As a consequence, mines reduced their extracting operations and unemployment of miners rose. Strong lobbying from the mining sector and combative miners’ protests burst. 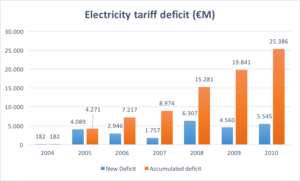 Source: Own elaboration based on data from Bankinter[9]

In 2010 the Spanish Government was struggling due to the financial and sovereign debt crisis. Employment and economic viability were now the main concerns of the population.

In this context, PSOE reconsidered its position towards climate change and adapted to the new situation. The party believed that the economic and political cost of pushing renewable energy further was not worth it.

This political change had an important impact in climate change: it reversed the environmental efficiency gains accumulated over the past several years, altering Spain’s electricity generation mix and increasing CO2 emissions by 35% in 2011 from the previous year.[13] 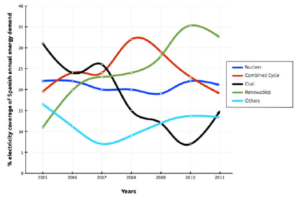 This case presents a clear example of the trade-offs politicians confront when addressing climate change: what prevails, current employment and economic viability or future environmental sustainability? What is the social cost of fighting climate change and how many unemployed families are worth one ton of CO2 saved?

In my opinion, political parties should stay true to their fight against climate change, even when temporary side effects may reduce the popularity of their longer-term goals. Going forward PSOE could follow these steps to adapt its energy policy and fight climate change more effectively:

[4] José Luis Rodríguez Zapatero was President of Spain from 2004 to 2011 as the national leader of the PSOE, after winning the 2004 and 2008 Presidential Elections

Climate Change and The Wonderful Company: A Growing Concern

Student comments on Do political parties use climate change demagogically?