For nearly two and half centuries Sotheby’s was able to preserve its position as one the world’s preeminent gatekeepers of art without altering its operations. And so, the auction house’s executives were daunted at first when asked to digitalize their organization.[1] Nonetheless, in recent years, Sotheby’s successfully embraced technology: from adopting information systems to moving its auctions to online marketplaces. In doing so, it has improved its services and significantly expanded the reach of its business. Nowadays, however, Sotheby’s management is facing a new wave of digitalization: Blockchain technology is threatening to dramatically disrupt the $60 billion art market and to diminish Sotheby’s role in the supply chain of art.

In 2016, Sotheby’s $4.2 billion auction sales resulted from three primary value add activities: (1) serving as an intermediary between sellers and buyers, (2) securing the transfer of art work, and (3) authenticating art and assessing its value.[2] Blockchain mitigates much of the need for a middleman to fulfill each of these functions. Through blockchain, market players are now able to record bids and validate transactions. Start-ups, such as Maecenas, are looking to democratize access to art.[3] By accepting cryptocurrencies they are reducing the high transaction costs associated with art trade and enabling investors who cannot afford multi-million-dollar artwork to acquire shares in a piece and collectively purchase it. Furthermore, blockchain promises to solve problems regarding the opaque money trail in the business. The authentication blockchain enables also introduces opportunities to trade forms of digital art, which were previously difficult to exchange due to the complexity of recording original ownership and preventing piracy.[4]

The disruption, however, is expected to have some limits. Marcelo Garcia Casil, co-founder of Maecenas, admits that establishing the value and authenticity of a new piece of art will still require the expertise housed in organization’s such as Sotheby’s. But once a piece has been authenticated for the first time, since it will be recorded on the blockchain, there will no longer be the need to repeat this process each time the artwork changes ownership.

Sotheby’s has demonstrated awareness to many of these concerns, declaring “embracing technology more effectively” as its second key strategic priority.[5] Indeed, in recent years, it has lived up to this promise. It first leveraged technology to systemize information about its global network of clients, enabling Sotheby’s to provide clients with a consistent experience when they arrive at offices in different cities. In addition, the organization reproduced its extensive catalogues online. Most significantly, in 2014, Sotheby’s partnered with eBay to live-steam its auctions.[6] In doing so, it allowed small-scale collectors who were previously excluded from its auctions to participate in the process and it exposed millions of others to the Sotheby’s brand. Since opening the platform on eBay, Sotheby’s has continuously expanded its online offerings, creating functions on its website as well as mobile and Smart TV apps for online-only bids. The online sales of art have also enabled Sotheby’s to supply relatively cheaper art, which it previously could not justify selling in its physical auctions due to the low profit margins. In 2016, online sales reached $155 million.[7] Observing the profitability of this new business model – which no longer requires extensive production costs associated with traditional auctions – Sotheby’s management has rapidly increased the number of online auctions. The market share of online sales is expected to continue to grow at a 25% rate over the next decade.[8] In the long run, Sotheby’s announced that it intends to leverage blockchain technology to preserve ownership over artwork; however, its management has also explicitly stated it has no plans to use cryptocurrencies.[9] 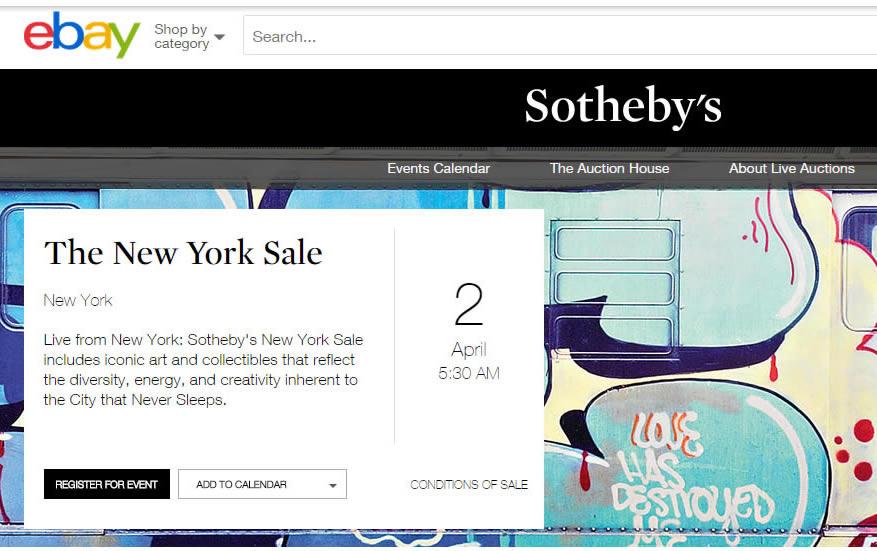 In order to preserve its leadership, Sotheby’s should accelerate the adoption of blockchain as a means to record provenance of artwork and, in particular, leverage it to begin trading with digital art. At the same time, while it further expands its online presence and opens up to a new customer base it should not abandon two key aspects of its traditional operations. First, it should ensure it preserves its relationship with high-end clientele, which allow it to remain an authority in the legacy art space. Second, it should promote live online auctions that provide an experiential aspect of art purchasing. In doing so, beyond simply functioning as a distributor of art, it can differentiate itself from competitors that merely provide a more “Amazon-type” purchasing experience.

[3] James Titcomb, “Fancy buying shares in a masterpiece? This site will let you,” The Telegraph, May 20, 2017, http://www.telegraph.co.uk/technology/2017/05/20/fancy-buying-shares-masterpiece-site-will-let/

A.P. Moller – Maersk and the Future of Shipping in the Digital Age

Student comments on Digitalizing the art trade: Sotheby’s became friends with eBay, but can it warm up to blockchain?