Will we have enough food to feed the growing population by 2100? According to Science Magazine, there is an 80% probability that the world’s population, now 7.2 billion people, will increase to between 9.6 billion and 12.3 billion in 21001, a population growth between 30% and 70% in only one generation. In addition, with climate change challenges and aggressive cost competition, it has become increasingly important for corporations to adapt their business and operating models to take advantage of available technology and catch up with growing demand. Dairy products companies are not the exception. They are re-writing the history of this industry making use of digital technology.

Cow milk and dairy products have been part of humans’ lives since 7,000 B.C when cattle became herded2. Since colonization, dairy products in America have been part of our diets as some of the earliest settlers brought cattle from several European regions in the 1600’s2. Before industrialization, the business and operation model of dairy farms were pretty simple. Farmers created value by exchanging hand extracted milk for help in their farms. As populations began to grow and human settlements became larger, the market required a change in the production processes to catch up demand. With the industrialization revolution, dairy companies adapted to incorporate large-scale production methods that have re-shaped the industry2. Today, the most common business model is one in which large milk cooperatives transform raw milk, acquired from independent farmers, into ready to consume dairy products that are commercialized in retailers. 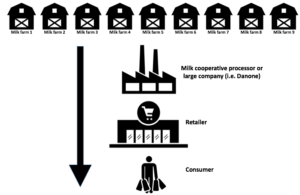 To increase milk production and reduce costs, cooperatives and farmers have made use of available digital technologies. Some examples of key usages are:

To continue taking advantage of the world’s digitalization and internet of things, I think the milk producers should also consider creating the Uber of milk. This application could potentially connect producers and consumers bringing better, cheaper and fresher dairy products to the average household. I think this could be possible by creating scale in the application, including not only milk, but also vegetables and fruit producers that want to trade their products. This interaction could reshape the business model by disintermediating the cooperatives ultimately bringing additional profits for the small farmers.

In conclusion, digitalization not only creates great opportunities for the different players in the dairy industry but also brings the possibility to transform the current business and operating models. In a world in which the population is expected to grow between 30% and 70% in the next 84 years, now is more important than ever to continue developing new technologies and ideas to survive as human civilization. Will we have enough food to feed the growing population by 2100? 649 words

How to Train Your Driverless-car

Student comments on Digitalization And Cows: A Productive Marriage. MOOOOOO