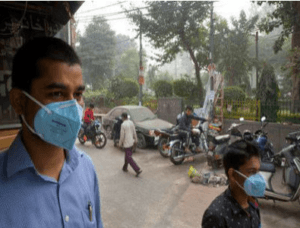 Delhi is yet again covered in thick smog that is choking its residents, including many members of my extended family. Every year, the air quality worsens in the winter months as farmers in neighboring states clear their fields by burning plant debris left over from the harvest. Many of the city’s laborers and poor residents keep warm by burning leaves and trash. The Diwali festival, which is traditionally celebrated by setting off firecrackers, also contributes to the foul-smelling haze. Dust from construction sites and car pollution exacerbate the problem, making Delhi air one of the most dangerous in the world.[1]

After Diwali this year, doctors claim that breathing Delhi air is akin to smoking 50 cigarettes a day. Last week, the air pollution levels were estimated to be 24 times higher than normal levels. Parts of Delhi reported 999 on the Air Quality Index (AQI), when the World Health Organization (WHO) considers anything above 25 unsafe.[2] The microscopic particles are considered particularly harmful because they are small enough to lodge deep into the lungs and pass into other organs, causing serious health risks. The smog has blanketed much of the city in recent days, severely reducing visibility, restricting traffic, delaying flights and restricting all but the most necessary outdoor activity. The problems are creating hassles that must be dealt by the citizens and the government.[3]

The severity of the issue has led the Delhi government to temporarily ban construction activity and use of diesel power generators, totally ban trucks from entering the city, as well as close all schools to avoid exposing children to toxic air. However, such emergency measures are not enough. Some government officials are ignorant and blame the unusually high pollution due to lack of wind and change in humidity. As a result, they are not willing to take long-term measures to curb the problem.

The government needs to do more work to enact systematic change. Unlike in other smoggy cities such as Beijing, air pollution has yet to become a politically sensitive issue in Delhi. Instead, residents (who can afford it) are relying on short-term solutions such as air purifiers. Unfortunately, many people cannot afford the purifiers and are suffering. And as a consequent, the purifier businesses are reaping profits from a hazardous environmental situation.

The government needs to take three major steps: (1) Temporarily ban all private cars and only allow sustainable modes of transportation such as bicycling, walking, as well as ride sharing services such as Uber. They also need to provide safe and convenient public transformation such as buses, trams, trains, etc. (2) Heavily regulate all construction sites, provide more sustainable fuel sources for the poorer population, and educate farmers on consequences of harvest burning. (3) Make the city greener by leading tree planting initiatives and provide tax credits to organizations and individuals that lead carbon neutral programs. This issue needs to be top of mind for everyone, and should not be forgotten the first time it rains and the air cleans up temporarily.

Realize that implementing such changes is very challenging, especially when it comes to changing consumer behavior. For example, people will be hesitant to give up the luxury of sitting in their own driver-driven cars to use public transformation/shared services. The challenge faced by government to quickly supply high quality public transport for everyone is also very expensive. The experiment run by the government of alternating odd or even license plate cars on the road at any given time (depending on the month) was a good test to see impact on traffic and pollution. The government should continue to do such experiments in the short-term to slowly change behavior as it helps prove out the value in the long run. This is where our role as future business leaders comes into play.

Some of the key questions we must ask ourselves: What business model disruptions can we enable to sustainably support governments in solving the environmental issues while meeting consumer needs of convenience and low-cost? How can we help developing economies grow sustainably? Are there examples of cities that have done this in a short period of time? Or do we always need to be patient as such changes inevitably take a long time?

Isolationism – Where should Samsung Go?