Is your favorite breakfast cereal harming our planet? Food manufacturers are affecting the massive climate crisis threatening our world’s food supply. In fact, the food and agriculture sector is directly responsible for ~25% of global emissions [1]. The resulting extreme weather has been leading to crop failures, price gauges and reduced quality goods. Notably, our beloved food giant General Mills has taken a trailblazing stance in setting aggressive goals to reduce its environmental impact and lead the industry towards a sustainable future. 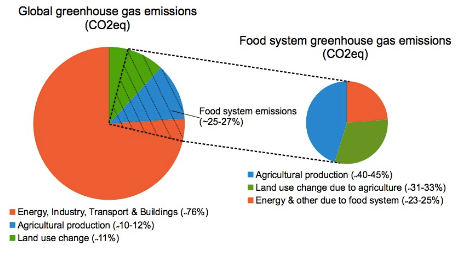 Stirring controversy in the food industry

As Chief Sustainability Officer Jerry Lynch stated, it’s no secret that “climate plays a significant role in the long-term viability of our business” [2]. Adverse weather has created severe droughts and floods, which have decreased General Mill’s raw material yields. In 2014, these conditions caused a ~4% loss in production [2]. Persisting climate issues have impacted commodity prices, and as a result, cereal prices are estimated to soar by at least 20% over the next 15 years [3].

Controversially, Oxfam publicly criticized General Mills and its competitors for their lack of attention to sustainability, claiming they were “accomplices of climate change.” In response, General Mills focused its efforts on its supply chain and successfully implemented sustainable practices.

Last year, General Mills committed to reducing its greenhouse gas emissions by 28% across its value chain over the next 10 years [4]. Unlike competitors, General Mills used a stringent science-based approach, relying on data to determine the reduction needed to sustain our planet’s health. In order to achieve this target, General Mills looked beyond its direct operations and set standards for its upstream partners in agriculture where two-thirds of emissions occur [5]. The company reinforced its moral stance and inspired competitors to follow suit by expanding its emissions goals to include its small and large agricultural partners and industry groups [5].

What General Mills should do next

As one of our largest food producers, General Mills has a moral obligation to be a leader in sustainability. Given that recent efforts have put the company on target to meet its original emissions goals, those need to be revised. General Mills should extend its 2050 emissions reduction target to 50%, the level necessary to combat global warming according to the Intergovernmental Panel on Climate Change [1]. Further, it should pressure suppliers and commodity producers to increase their targets and publicly report progress. This change is necessary as not only a political statement on the urgency of this issue but also a mitigation against the fact that agricultural emissions will likely increase by 30% by 2050 as food demand rises [1].

Invest in regenerative agriculture to support suppliers in developing economies

20% of General Mill’s raw materials are procured from developing countries and smallholder farms, which lack access to the capital and technology required to implement impactful sustainability improvements [6]. General Mills should educate those growers in regenerative agriculture techniques, which can be implemented more quickly and promote carbon storage [7]. For example, farmers could manage livestock behavior in ways beneficial to land or infuse perennial crops that prevent soil erosion. These techniques will be easier to implement than those requiring advanced monitoring technology and will allow smallholder farms to boost their climate resiliency.

Staying on the shelf

General Mills started off on the wrong side of the sustainability equation, but the company addressed criticism through action. Since then, General Mills has made impressive strides in reducing GHG emissions and addressing the effects of climate change on its business and supply chain. Still, the crippling food crisis is looming, and General Mills must leverage its position as an industry leader to continuously promote sustainable practices throughout the food industry.

As a consumer, what would you do to make sure your favorite cereal stays on the shelf?

More with less at Nike

IT’S TIME TO PLAY BY THE RULES

Student comments on Cuckoo for Climate Change: How General Mills is Tackling the Ongoing Food Crisis