It may seem counterintuitive to associate Coca-Cola with our planet – what does a sweet, syrupy mystery soda have to do with climate change? Despite the many degrees of removal of its final product from the earth, Coca-Cola has not only recognized the current and potential future impact of climate change on its business, but has begun to take action by investing in sustainable practices up and down its supply chain. Still, vocal activists, especially in developing countries, insist there is much more Coke can do.

Climate change has the potential to affect Coca-Cola’s operations in several ways: first, changing weather patterns may affect the supply of key raw materials, such as sugarcane, corn, and coffee. Secondly, unpredictable changes in weather may disrupt Coca-Cola’s delivery mechanisms or even product demand. Finally, and perhaps most importantly, climate change may affect the availability of water – the primary ingredient in Coca-Cola products [1]. Jeffrey Seabright, Coke’s VP for Environment and Water Resources, explained how these events could, and have begun to, impact Coca-Cola’s bottom line: “Increased droughts, more unpredictable variability, 100-year floods every two years. When we look at our most essential ingredients, we see those events as threats” [2].

Coke has implemented a robust sustainability program to address the threat of climate change – and to mitigate its own complicity in global warming as one of the world’s largest CPG manufacturers. The below infographic lays out Coke’s contribution to carbon emissions across different parts of the production process. 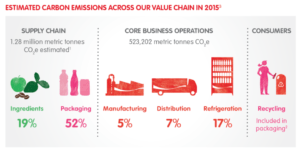 According to Coca-Cola’s Position Statement on Climate Protection [3], the company is focusing on reducing emissions in three key areas:

Coca-Cola set a goal to reduce overall manufacturing-related emissions by 5% by 2015. While this seems like an incremental improvement, Coke claims its efforts have saved the company $600M since 2004 [4]. These include both “quick fixes” – such as repairing leaks and optimizing factory temperatures – and larger investments, like installing efficient lighting.

While Coke has not set an explicit target for reducing the emissions of its distribution fleet, it has launched fuel efficiency experiments for its 200,000 delivery vehicles. In several developing countries, Coca-Cola has tested various alternatives to traditional fuel, like trucks powered by electricity, diesel, or natural gas. In addition, Coke is examining its basic delivery operations by optimizing truck routes to reduce refuel, and trialing lighter-weight packaging [5].

Coca-Cola has set aggressive targets to reduce the emissions of its cold-drink equipment. The Global Warming Potential (GWP) metric measures how much heat a particular gas traps in the atmosphere, relative to carbon dioxide (which has a GWP of 1). Hydrofluorocarbons (HFCs), a common refrigerant, have a GWP of 3790 over 20 years [6]. The Kyoto Protocol also specified HFCs as a gas to be reduced, leading Coca-Cola to set a target to completely phase out HFCs in its cold drink refrigerators by 2015. Unfortunately, Coca-Cola reported in its 2014/2015 Sustainability Report that it was not on-track to reach this goal, citing high costs and difficulty of procuring equipment in certain markets. Still, about 30% of new equipment purchases in 2014 were HFC-free, and Coke claims to have invested over $100M over the last decade to increase the efficiency of its cold drink equipment [7].

A Path Forward: Focus on Localization

Despite these efforts, Coca-Cola continues to face controversy and opposition from governments and activists over sustainability practices. In India, for example, Coca-Cola is seen as being a major contributor to groundwater depletion. Vocal protests have led to scrapped plants and 2 closures over the last few years, despite India being declared a focus market for Coke in 2012 [8].

All this happened in the wake of Coca-Cola’s prominently marketed water replenishment program, which claims the company has replenished over 115% of its water consumption to local communities [9]. Dissident activists point out that “water neutrality” is a deceptive concept, because “…water issues are local in their impact…the impacts are borne by the local communities and farmers that depend upon it to meet their water needs. Replenishing an aquifer hundreds of miles away from the point of extraction, as Coca-Cola has often done to ‘balance’ their water use, has no bearing on the health of the local aquifer which Coca-Cola depletes through its bottling operations…” [10].

These protests suggest that although climate change is undeniably a global problem, its effects are felt most acutely at the local level. By implementing global sustainability programs, and more importantly, measuring the success of those programs through global statistics, Coca-Cola obscures the true impact of its actions on local communities. Going forward, Coca-Cola should deploy hyper-localized sustainability practices to combat the human effects of climate change, as opposed to striving for blanket solutions across all its markets. (Word count: 799)

Putting a Cork in Climate Change