Climate change seems to be advancing at a terrifying pace in recent years – with ever more superstorms, droughts, fires, and other natural disasters around the world. However, climate change is just as treacherous when it works in more subtle ways – gradual changes in temperatures which impact one of the planet’s most important resources: our agriculture and food supply. While global warming impacts a variety of crops, one crop that may hit particularly close to home is cocoa – the key ingredient in chocolate, much-loved treat around the world.

Approximately 70% of the world’s cocoa is grown in Central and West Africa, and farmers have seen that as average temperatures have risen, cocoa crop yields have been decreasing[1], putting both the farmers’ livelihood and the world’s cocoa supply at risk. In fact, it is predicted that a number of key cocoa-growing regions in Africa may no longer have a suitable climate for crop production in 30 years[2]. As farmer’s yields have fallen due to global warming, they have been forced to clear more forest land to increase farmland – which in fact further deteriorates the environment.

This disturbing trend is of great concern to all consumers of cocoa beans – notably, the major global chocolate conglomerates, who consume a majority of the world’s cocoa bean consumption. These companies (Nestle, Hersheys, Mars, and Mondelez) earn billions of dollars in revenue selling processed chocolate products around the world – revenues which depend entirely on the availability of cocoa beans. Mondelez, for example, makes brands such as Cadbury’s, Toblerone, and Milka, and has (like many of its peers) acknowledges the significant risk posed to their supply chain by climate change. 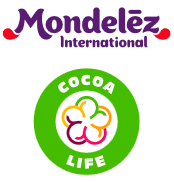 production. The overarching umbrella of this initiative is their Sustainability 2020 Goals, a set of plans intended to (among other things), reduce absolute carbon dioxide emissions from manufacturing, and reduce deforestation in the agricultural supply chain[3]. Within this initiative, perhaps the most important element is the “Cocoa Life” program, which helps Mondelez cocoa farmers with sustainable farming practices. As part of this program, the company recently signed a Memorandum of Understanding with the government of Cote D’Ivoire, working with the Ministry of Environment to prevent deforestation near cocoa farms, caused by farmers illegally expanding farms to combat falling yield. Mondelez will simultaneously help farmers increase productivity and train them in sustainable agricultural practices[4]. Specifically, they are helping implement the U.N.’s REDD+ (Reducing Emissions from Deforestation and Forest Degradation in Developing Countries) sustainable agriculture practices. Additionally, by 2020, Mondelez will reduce its carbon emissions from manufacturing by 15%, and reduce its water consumption by 10%[5]. 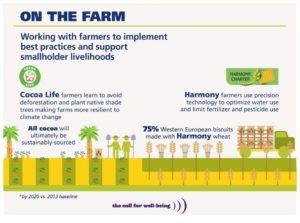 These goals all sound admirable and legitimate, but the question looms – is it enough? To combat a risk that can displace your entire business, is there such a thing as “enough”? Let’s briefly compare Mondelez’s sustainability plan to that of Mars – the world’s largest chocolate manufacturer. Mars recently pledged a $1 billion investment to fight climate change – including cutting greenhouse gas emissions by 27% by 2025 and by 67% by 2050[6]

In the face of such bold moves, it appears clear that Mondelez is not doing enough to combat this critical risk. For example, they target a 15% reduction in carbon emissions by 2020 based on aligning with “current approaches to setting science-based targets to support the global effort to limit climate change to less than 2º C”[7] – but why not be a leader and beat these recommendations? In this regard, Mondelez is doing the bare minimum that is recommended by scientists, rather than taking a strong position to minimize their emissions as much as possible – which is their responsibility, due not only to their moral obligation but their dependence on cocoa production.

Mondelez states that they will train and coach farmers and distribute seedlings for trees to provide shade over crops (reducing the impact of droughts)[8]– but provide no numbers on the scale or scope of this goal. They need to provide measurable plans which are not just cosmetic but create meaningful change on the ground.

However, other questions still remain – is Mondelez the correct party to do more on deforestation, or should that responsibility lie with the governments of countries which are major cocoa producers? Will shareholders support Mondelez increasing the amount of capital invested in sustainability, or will they prove unable to see the long-term necessity of these investments?

Isolationism – Where should Samsung Go?

Student comments on Climate Change and Chocolate – Not so Sweet