Climate change is a global issue. As the case opens: “The risk of large-scale climate change is one of the central issues facing the world.” For this reason, I have chosen to focus my analysis on a non-US company, given that (1) the environment is an international responsibility; (2) I feel that my experience in Asia might add breadth to the scope of the section’s wider debate. I thus turn to China, and to “Beijing Enterprises Water”, one of the country’s key wastewater operators currently responding to China’s waste quality problems, a critical issue amid the wider “war on pollution” China is currently facing.[1]

In China, 60% of the groundwater is unfit for human consumption.[2] A 2014 government survey revealed that only 3.4% of the 968 monitoring sites met the highest “Grade I” standard (with 63% at grade III of VI or above). In addition, ~50% of the country’s major enviro-political unrest is water-related – making the issue not just about economics and health, but about political stability also. If we look at the exhibits below, it is easy to understand why: 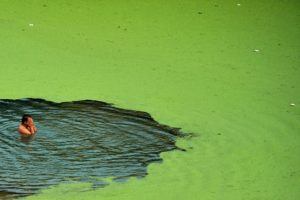 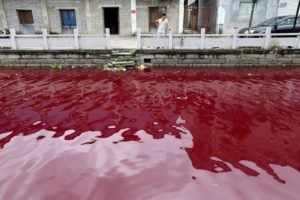 Left:A man swims in an algae-covered part of the Han River in Wuhan, Hubei province, 11 June 2014, Reuters, 2014; Right:  A river in Wenzhou, Zhejiang Province, contaminated by unknown substances (thought to be blood), Reuters, 2014

As one of China’s leading water suppliers, BEW is an obvious company “in the firing line” to place our analysis. BEW originally began as a government sponsored water supplier, and overtime, gradually built a wide network of water supply and sewage plants around different provinces in China. However, with mounting pressure from the government and climate-change groups, BEW has pivoted its business focus to waste treatment.[4] 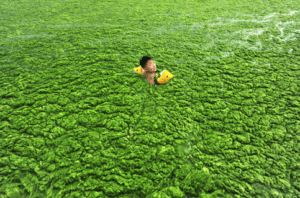 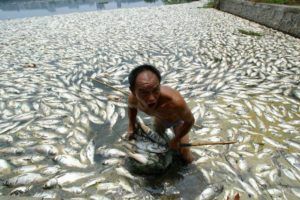 In response to these spiralling problems, the government has been taking increasingly intense steps to tighten regulation, with efforts across wastewater, soil/air pollution, and CO2 emissions. Its focus on water pollution is likely to continue for at least the next ten years, owing to increasing scarcity from global warming, and demographic shift.

As the government has ramped up scrutiny of water standards, BEW has been forced to shift its focus from simply a supplier, to a wastewater treatment facility provider, investing heavily in water-environment technology and cleaning facilities, leading to improved efficiencies and utilization rate.

Exhibit 3: China has under-invested in environmental protection, but it has been catching up: Source: China Statistical Yearbook on the Environment, Wind 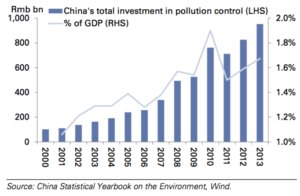 Exhibit 4: CO2 emission in the US and China: Air Pollution is a huge concern: 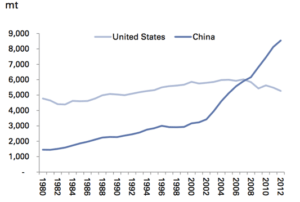 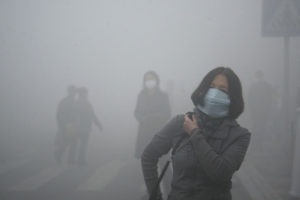 As mentioned, in response to the war on water pollution, the company has made technology and operational upgrades to existing capacity. 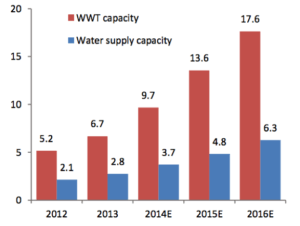 (b) The utilization rate of BEWG’s wastewater treatment capacity has been rising, sources: Company data, June 2016 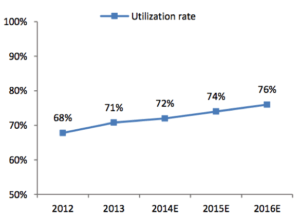 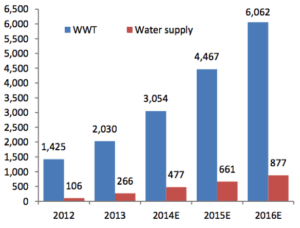 The result so far, and future steps:

BEW is now one of China’s leading water treatment and supply players, and has gained international recognition as a leading global water-treatment company.[5]

In order to further benefit I believe that BEW must continue to invest in its technology and treat more provinces. Specific to China, BEW must also maintain a positive relationship with the government. The company has been actively doing this by bidding for more “Public-Private-Partnerships (PPP)”, with a total investment of Rmb50bn. This should provide economies of scale, help improve operational abilities (a wider network is beneficial in a large country such as China), and lock in a larger number of long-term contracts.

[1] To place this in context, over the past few decades, in order to fuel tremendous economic growth, China has consumed an enormous amount of energy per unit of GDP. For example, in 2013, while contributing 15.4% of global output, China consumed 44%-61% of the world’s copper, coal, steel, aluminum and cement: the impact of this imbalance rendering China the world’s worst polluter. Studies have shown that out of the 161 Chinese cities closely monitored by the authorities, only 16 reached the national standards of urban air quality; while the amount of contaminated grains (by heavy metals) could feed 24million people. Sources: Chinese government studies released by the Chinese Ministry for the Environment, 2014; Goldman Sachs Investment Research, 2015

[2] Source: Survey carried out by the Chinese Ministry for the Environment, 2014

[4] By the end of 31 December 2013, the Group had 130 sewage treatment plants and 4 reclaimed water plants in operation in Mainland China. The total daily design capacity in operation of sewage treatment plants and reclaimed water plants hit 6,259,750 tons (31 December 2012: 4,777,250 tons) and 418,000 tons (31 December 2012: 387,000 tons) respectively. The average daily processing volume hit 5,391,981 tons, with an average daily treatment rate of 81%. In addition, the company gained qualifications in engineering for consultancy and design of water treatment plants. As an integrated water system solution provider, the Group acquired extensive experience in bidding, building and operating sewage water treatment projects, and also successfully marketed its treatment technology and experience in construction services to other operators and constructors. Source: Company website

[5] At the 2014 Global Water Summit in Paris, held by  “Global Water Intelligence”, Beijing Enterprises Water Group was selected in the top four in the “Water Company of the Year” category – the only company from China. The committee highly commended BEWG and recommended they continue to expand their portfolio both in China and overseas. Source: Company website

Student comments on China’s War on Pollution: Spotlight on Water