One industry that has been significantly impacted by digitization is educational resources, where historical giants such as Pearson Education, Houghton Mifflin, and McGraw-Hill had owned over 50% of the textbook market in 2008 but are being disrupted as the development and delivery of textbooks becomes digitized. All of the giants have seen revenues decrease, with McGraw-Hill seeing an 11% decrease over three years and Houghton-Mifflin seeing a 13% decrease. While in 2008 the estimated cost per student of printed textbooks was $3,871 annually[1], many changes in the textbook industry have effected both K-12 and higher education textbook industries to decrease this cost and allow others to enter the market. First, textbook prices are dropping as new competitors enter with cheaper operating models, done easier through online markets and open source resources. Sales models are changing from in-person to online, far-removed from purchaser/buyer and with a much higher ability to compare pricing and products. And finally the move towards online textbooks and coursework is significant, allowing even more new entrants with significantly less overhead to take market share from the big three. Even further, digitization in higher education has decreased the number of new books purchased, as improved used book markets have been created as well as widely available e-textbooks.[2] 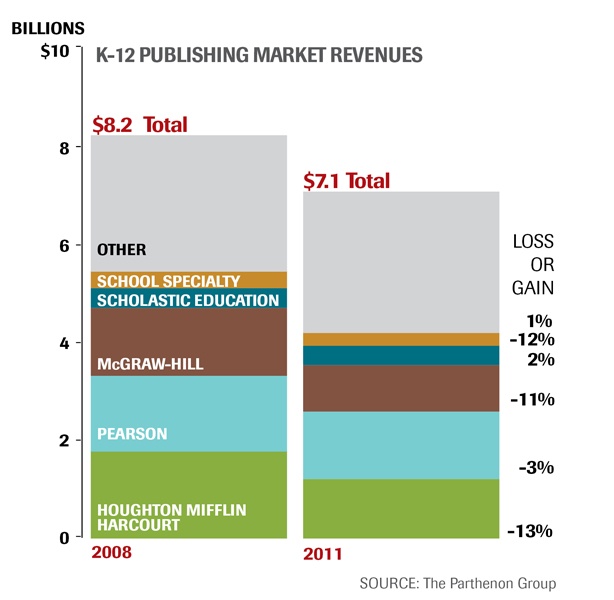 While the top three have been trying to adapt as competitors such as Khan Academy have gained traction, Pearson is the only that has seen some success. In fact, in 2012 McGraw-Hill sold a significant portion of their education division[3]. Although Pearson seems to have been effected the least by 2011, they relaunched in 2012 with the aim to be “a digital learning and services company[4]”, far from their print textbook roots. The switch to digital tools in education has been slow but steady, with the core textbook publishing market decreasing from 39% of K-12 market spending to 30% of market spending in 2012[5]. Although Pearson has struggled to adapt in other areas of business, the textbook business (by far their largest business division) has had the chance to change with the slow trend towards online courseware. From 2008 – 2012, Pearson’s has managed to maintain its’ market share in the K-12 textbook market (and education division even grew sales by 70%, although admittedly partially due to Pearson’s large investment in the testing and assessment market[6],[7]). 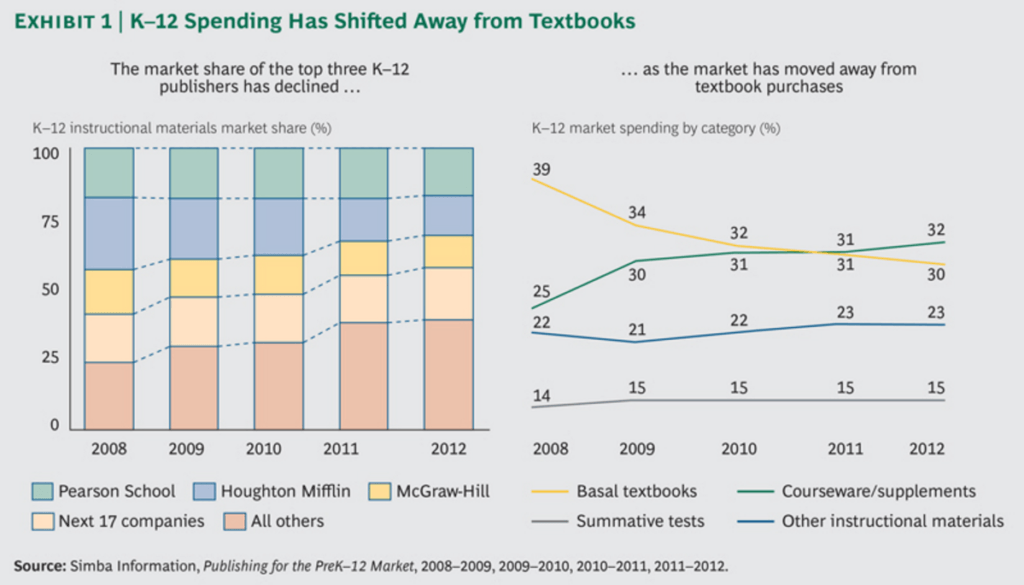 Pearson has done many things to defend itself against a changing business in the textbook industry. Most importantly the company has adjusted their business model to focus more in digital content, while also changing their operating model to be more dynamic and fast moving. The key changes to the business model is the focus in online, customized delivery with interactive platforms that are responding to needs of teachers much more quickly than has been expected in the past. This change has been done by both changing internal processes and operations, but also by acquiring large education software companies such as Schoolnet. Examples of this change can be seen through the various partnerships they are engaging in, such as one with Arizona State University where they are the provider of online, adaptive-learning math courseware. By partnering closely with the university Pearson gains publicity, but is also able to adapt platforms to be more even relevant and more effective, an opportunity few start-ups may be able to find.

Moving forward Pearson has the opportunity to use their presence in the market, as well as the significant expertise they have in creating textbooks aligned with state and national requirements, to continue to adapt to the ever changing digitized world of online courseware. The resources and knowledge they have in creating relevant content for schools is invaluable in the complex education technology market today where you don’t know what a new start-up may provide, or how long they might be around. This is even more important when you consider how much better Pearson is positioned to create a “closed-loop” system that is fully aligned with state or national requirements and assessments, and also is able to provide real-time data to educators allowing them to be more effective educators. By evolving the plug-and-play customization tools, as well as increased connectivity with teachers and students Pearson could further cement their position as a digital leader in courseware and defend itself against competitors.

The digitization of a pill