Jaguar Land Rover (JLR) posted record sales for the financial year 2017, for the first time selling in excess of 600,000 cars [1]. However, the company could be facing tough times ahead as a result of its global supply chain & reliance on overseas talent [2].

Brexit could have a severe impact on JLR’s supply chain costs. If Britain fails to secure a good Brexit deal, JLR faces the prospect of paying export tariffs to the extent of 10% on its sales to the EU [3] –  a market that accounted for almost a quarter of its overall sales in the last year. To make matters worse, JLR sources nearly 40% of its components from the EU [4]. If tariffs are imposed, JLR would be penalized for buying from the EU as well as selling into it, thus seriously harming its competitiveness against European competitors such as Mercedes, BMW & Audi. 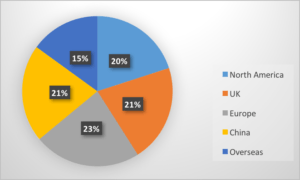 Company sources estimate that as a result, JLR’s annual profit could be cut by 1 billion pounds by 2020 (Annual Profits in 2015-16 were 1.6 bn GBP) [5]. However, in the long term, the effects could be even more catastrophic. Company CEO Ralf Speth is worried that his company might not be able to attract top overseas engineers after Britain leaves the EU, due to higher immigration controls [2]. This would be seriously damaging to the company’s long-term innovation capability and put into question its vision of achieving complete electrification of all models after 2020 (from no electric models today) [6].

In the short term, JLR is trying to mitigate the potential Brexit impact by diversifying its supply chain. In particular, it plans to spend 1 bn GBP to open up a new production facility in Slovakia to cater to European demand. The new plant will be initially equipped to produce 150,000 cars annually with the capability to subsequently increase capacity to 300,000 cars [7]. The extended capacity should be enough to satisfy demand from the EU for the foreseeable future and will shield JLR not only from future tariffs but also from any currency fluctuations related to the GBP.

The company is also considering opening a new office in Brussels in order to maintain influence with European policymakers and make it easier to attract and retain European talent [7]. However, company officials have made it clear that JLR is and will remain to be headquartered in the UK.

In the long term, JLR is planning to increase its presence in emerging markets such as China, Brazil & India in order to reduce reliability on European sales. It recently built a new production facility in China to better serve the local market there & also has plans to invest in Brazil [8].

The biggest risk for JLR in my opinion is losing its innovation capability as a result of having both fewer resources to spend on R&D (due to the possibility of lower profits) and an inability to attract the right level of global talent. At a time when the automobile industry is going through a massive transformation toward newer technologies, losing innovation will drastically impact JLR’s long term competitiveness.

Thus, I would recommend that JLR open a new innovation facility either in Europe or Silicon Valley. With immigration controls into the UK likely, shifting innovation to another country will increase JLR’s ability to attract world class engineers and thus improve its ability to develop better cars in the future. I would also suggest that JLR leverage its heritage and premium brand image to partner with companies that are looking to develop next generation automobile technologies (such as UBER and Alphabet Inc). This will ensure that the cost burden of R&D is shared and also improve JLR’s innovation capability as a whole since they will now be able to learn from companies at the forefront of global technology.

Lastly, in addition to geographically diversifying their manufacturing bases, they should also look to diversify their sourcing strategy by decreasing reliance on European auto parts. A strategy of vertically integrating in the UK would help reduce risk across the supply chain.

Will JLR be able to attract the leading technology companies to partner with it? How will JLR deal with further protectionist policies in its major markets, for example potentially in the USA? How will increased competition from companies like Tesla affect traditional manufacturers like JLR, BMW & Mercedes in the future?

Additive Manufacturing: Adding up to a Disruption for UPS