Unprecedented droughts in the last several years, widely attributed to climate change[1], have wreaked havoc on the sensitivities of pinot noirs and cabernet sauvignons. While lack of water is the immediate concern, extreme heat can change the colour and taste of grapes by impacting their acidity[2]. Recent studies have estimated that the average temperature in California could rise by 1.8° Fahrenheit (1° Celsius) by 2040 due to the increase in atmospheric greenhouse gases. The resulting impact could reduce suitable wine-cultivating land by up to 50%[3],[4].

California produces approximately 85% of all U.S. wines (638 million gallons in 2015)[5]. In response to early legislation and public perception, the California Sustainable Winegrowing Alliance was formed in 2003 as a proactive approach to addressing sustainability issues. The CSWA is a non-profit organization that “promotes environmental stewardship and social responsibility in the California wine community”[6]. Composed of the Wine Institute and the California Association of Winegrape Growers, the CSWA has developed the California Code of Sustainable Wine Growing (CCSW) that focuses on eight key sustainability metrics: water efficiency, energy efficiency, pest management, soil health, waste management, wildlife habitat, neighbours and community, and employees.

As water management has the greatest impact on wine quality, in 2015 an overwhelming majority of growers certified by the CSWA used a combination of both micro-irrigation systems and regulated deficit irrigation (RDI) to control water efficiency and improve fruit quality[7]. Micro-irrigation systems allow the grower to control how much water gets applied to the crop and when, while RDI only applies irrigation to specific stages of a crop’s growth, both reducing water use. This has a knock-on effect on energy consumption, as energy is required to pump water from wells or irrigation ponds. Finally, reduced energy consumption lowers the amount of greenhouse gas (GHG) emissions.

As of August 2016, 106 wineries representing 64% of total wine production (measured by total number of cases produced) were CSSW-certified[8]. E&J Gallo, the largest family-owned winery and largest exporter of California wine, is one of the leaders in sustainability practices; it saved 11MM kilowatt-hours of energy in 2015 while avoiding 15,000 tons of C02 emissions[9]. In a more radical move to stem future changes in climate, Gallo and other wineries have started to cultivate different types of grapes that can survive in hotter weather. However, wineries face a huge hurdle in acclimating consumer tastes to new grape varieties that they are unfamiliar with. Given the large upfront investment to produce a wine, those in the industry are wary of betting the wrong way with a new variety[10].

Sour Grapes or No Grapes?

In the short term, there are additional production strategies that the CSWA can suggest to its members. Other mitigation systems include a special trellis to provide shade or a specialized irrigation system to provide cooling for plants. Post-harvest, wineries also have the option of modifying fermentation processes[11]. While climate change has threatened Californian producers, the shift has been a boon to regions like Washington, which have seen their production double in the last decade[12]. Without more innovative changes, the CSWA risks lower production from its members and potential loss of market share to other states. 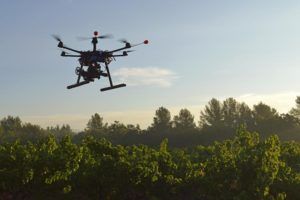 Beyond the current measures to optimize production, the CSWA should consider fundamental shifts in production philosophy and study the benefits of utilizing more sophisticated technology. For example, one winemaker has turned to the use of drones for aerial scans of his acres, while scientists are testing the use of near-infrared sensors. Both methods aim to gather more accurate data on the crops to inform the winemaker’s decision on how much water, fertilizer, and energy are required in certain areas of a vineyard[13].

While new grape varieties may not be in demand with consumers, the CSWA should further explore the possibility of adapting existing grape varieties to suit future weather conditions. Two scientists at St. Louis University were recently awarded a $4.6 million grant to study grapevines’ root systems to innovate more sustainable agricultural practices [14]. In effect, the root systems of grapes could potentially be adapted for changing climates without the need for engineering a new grape variety. If successful, it could eliminate the need to re-educate consumers and allow Californian growers to remain competitive in the face of changing weather patterns. The study is scheduled to be completed in five years.

While there are many changes ahead, Californian winemakers are moving to adapt and will likely continue to prosper. In the meantime, we can all enjoy a glass of California’s finest and dream of warm summer days.