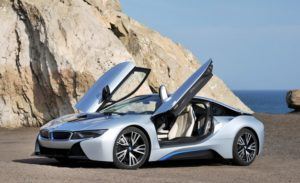 Climate change introduces profound disruptions to the business models of every member in the automotive industry today.  For the past 100 years at BMW, the senior management’s daily decision makings have been centered around creating innovative car models and providing outstanding customer services to secure our leading position as the successful German car maker that keeps “shaping the mobility of the future”.  Yet, today, “shaping the future” no more means merely to hit our sales target in the conventional fuel-powered luxury car segment, but to expand the corporate mission to developing the new vehicles that produce lower emissions and offer better fuel economy.  To successfully achieve the goal of cutting emissions in half by 2020 by offering electromobility in all segments,  BMW is breaking out from its comfort zone and take certain risks in tapping into new technology and business areas, driven by the increasing popularity of electric vehicles. 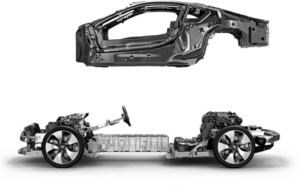 Car Frame of i8: Reduced Parts

In electromobility market landscape, technical challenges exist and so do the sales pressure imposed by strong competitors. What we need to appreciate here is that electric cars are not merely about cutting down on emissions. The shift to electric power transmission fundamentally changes the mechanical complexity of the car. The number of moving parts is reduced drastically, as the drive shaft, fuel tanks, transmission, and internal combustion engines are all removed. This reduced complexity means that the sophistication required to build and design cars changes, which in turn changes how they are built and thus the whole operating model of the production line.  BMW’s own electric/hybrid car drive system,  called “eDrive”, comprises the electric motor, power electronics, e-transmission and high voltage battery system, with the battery system being the “heart and soul” of the whole vehicle. BMW’s electric/hybrid vehicles strive to continue the company’s traditional value proposition as being “the ultimate driving machine”—all components are optimized to produce the feeling and sound that are equivalent to the intimate experience of driving a gasoline-powered vehicle. This superior driving performance is accompanied by a high price tag; BMW’s electric/hybrid line i-series starts at $42,400, with its latest model i8 costing from $140,700. 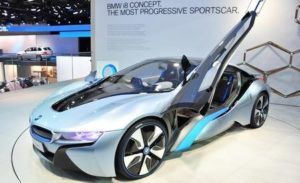 The Release of BMW i8

The luxury vehicle market, including both the fuel-powered and the electric-powered, mainly include global players including Audi, BMW, Mercedes-Benz, Lexus and Tesla. The sector in total generates about 5.7-6.5 million unit sales per year for a total revenue of $245 billion. That means that the average price of a vehicle in this segment is around $43,500 at most. It is clear that BMW needs outstanding interactive software to justify its pricing position for its i-series. Surprising, the software development is outpaced by its hardware in any BMW’s electrical/hybrid vehicle. Though proudly claimed as the “most advanced driving software in the auto industry”, BMW’s iDrive system has been reportedly criticized by its drivers as “hard to navigate”, while its navigation system has been increasingly criticized by a significant population of buyers. “I would rather find the route using my own sense of direction than opening this little screen and wait for it to turn on” said by a loyal BMW client during a driver satisfaction research that represented the voices of many. Outside BMW, luxury car makers are competing to add their own software capabilities, with Tesla being the most competitive. Supported by substantial amount of fund raised from investors and the American spirit of continuously introducing software breakthroughs on all levels, Tesla distinguished itself from other sustainable vehicles through its extremely advanced and driver-friendly software. It has been brought to the management’s attention at BMW that the company need to make deliberate efforts to instill “disruptive” thought process into its corporate culture when it comes to iDrive’s design.

Electric car business is also unique in the way that it not only has to manufacture and sell cars, it also needs to popularize the power restore technology on which its cars operate in order to sell them. This requires BMW to build out a network of charging stations to allow i-series owners greater range in their travels. To achieve this, BMW has mapped out its expansive charging network, called “ChargeNow”, on 5 continents around the globe. These stations partner with charge point operators allow drivers to charge his/her vehicle and receive just one monthly bill.

Another important after-sale component that introduces revenue streams for the company is the dealing with used eDrive batteries that have degraded too much for continued use in electric cars. By turning used eDrive batteries into home energy storage units, appropriately called “repurpose batteries”, not only has BMW created a sustainable energy lifestyle for urban residents but also expanded the operating model’s revenue generation capabilities.

Overall, to compete for the market share of electric cars, make significant incremental improvements and tweaks to the traditional way in which cars are made, sold and serviced is extremely important to any luxury car makers. BMW relies on in-house developments not only for eDrive but also its expensive procedures ranging from stamping to robotically operating welding machines. I consider it reasonable to recommend that the manufacturing of the welding, stamping, interiors and the infomatic systems inside cars get gradually modularized and outsourced in the future, just in the way the other electronic products outsources parts of their manufacturing processes.

The next thing I recommend is to increase its innovation power in the iDrive software development. I believe in the long run, the profitability of any electric car business depends on the capability of its software technology. In the traditional era, software need to be updated inside physical shop and many customers opt for ignoring updates because of their busy daily schedules. Traditionally, new model launches and model refreshments are the only known drivers of strong revenues . Typicaly, automakers upgrade a car model with new features every two to three years before changing the model in about eight to ten years. However, in the era of electric cars, the reduced number of moving parts introduced the potential ability to ship refreshes and updates directly through its software via connected network. Given the increased mechanical simplicity of an electric car structure, the sophistication and capabilities of its software technology can be extensive. In fact, I see software technology as the main selling point of the future electric car industry.