The impacts of climate change have become visible over the last century, prompting nations to start a dialogue to reduce greenhouse gases (GHG) emissions. While advances were made, emissions continue to increase. Specialists have been warning the global community that if this trend is not reversed, the world can face significant challenges that may cost us billions of dollars.

However, there is another “indirect” cost, often not in the epicenter of the climate change discussion: the millions of lives that may be affected or even lost because of the impact this phenomenon can have on food security. According to the World Food Programme, part of the United Nations system, “people are considered food secure when they have availability and adequate access at all times to sufficient, safe, nutritious food to maintain a healthy and active life” 1. Food security is still an issue today; the World Bank estimates that, in 2014-16, 795 million people were undernourished globally (10.9% of total population), of which 780 million were living in developing nations2.

While studies indicate that there are still uncertainties regarding the impact of climate change on some aspects of the food chain, it is widely acknowledged that depending on the level of global temperatures, the magnitude of CO2 in the atmosphere, as well as the frequency/intensity of extreme events, such as droughts and flooding, crop yields, livestock production and fishery can be significantly affected, consequently threatening food security3 and impacting millions of lives. In other words, climate change can affect global food supply, and consequently an important parcel of the world’s population, which is expected to reach 9.6 billion people by 20504.

Thankfully, the corporate world has not silenced on this matter. A good example is General Mills (“GM”), which has been firmly engaging in the theme. In a recent public letter, GM (global sales of US$16.6b in FY20167), along with other nine food and beverages companies, made three commitments: re-energize efforts to ensure a more sustainable supply chain; have more transparency on efforts and best practices’ sharing; advocate for governments to set clear targets for GHG emissions reductions8.

GM has been long committed to being part of the solution for climate change. In August 2015, it took even more concrete steps by announcing a reduction of GHG emission by 28% across its entire value chain by 20259. 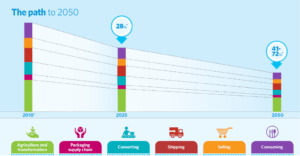 As a food company, climate is key for the long-term viability of GM’s business, not only because it directly influences its ability to supply raw materials (i.e.: corn, oats and wheat), but also because it can interfere deeply on its ability to deliver quality food to consumers9. With presence in over 100 countries7, GM is engaged in playing a central role to help mitigate the human impact on climate change and the resulting challenges the company’s consumers and the environment can face in the future.

While several initiatives are already being implemented, I believe there are still a few steps the company could take. I cite below three specific examples:

By taking these steps in addition to the initiatives GM is already implementing, the company would multiply exponentially its impact on the entire food chain, therefore having a greater contribution to mitigate and/or adapt to climate change, consequently minimizing the risk of higher food insecurity globally. Undoubtedly these actions are not simple, nor easy to implement, and they may even cost money the company wouldn’t otherwise choose to spend. But if GM takes the lead, other companies may follow, and the joint effort can massively determine what – and how much food – ourselves and our children will have available in the decades to come. (798 words)

Sustaining My Buzz – Readying a California Vineyard for Climate Change

Fresh Del Monte: A Victim of its Own Success

Student comments on Be thankful for what you eat today; climate change can take that privilege away from you