We are in the midst of a digital revolution. It is no exaggeration to say that the validity of dozens of established media business models is being fundamentally threatened. Music labels, print newspapers and broadcast TV players are in the midst of a fight to remain relevant as consumers’ consumption habits rapidly evolve. The British Broadcast Corporation (BBC) is an organisation at the heart of this flux.

The BBC is the world’s largest public service broadcaster (PSB), commissioning £2.2bn of content for UK audiences every year[1], a portion of which is distributed globally. It serves to universally inform, educate and entertain whilst remaining impartial and objective – free from governmental bias and unfettered by commercial agendas.

But the BBC finds itself in an environment of unprecedented change. 56% of UK households had a TV connected to the internet in 2015, with 83% able to receive superfast broadband[2]. This has vast implications for traditional TV viewing: audiences are increasingly shifting to catch-up and video-on-demand (VOD). Viewing of non-subscription VOD services (such as the BBC’s iPlayer) rose by 26% in 2014, and 16% of UK households now have a subscription to Netflix[3]. This, combined with mobile device proliferation, means that the old world of TV viewing is, if not yet obsolete, under strain: 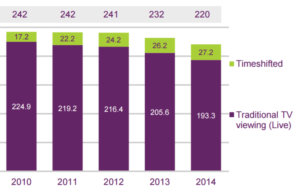 So what is the scope of the BBC’s role as a PSB in this age of box-set on-demand viewing? Should the BBC be changing its model to remain relevant and adapt to over-the-top[5] providers?

The corporation has already done a lot of evolve. BBC Online was opened in 1997[6], bringing together the BBC’s journalism on a digital platform. They leveraged their archive of premium content assets to launch the iPlayer in 2007[7], the first ever VOD service, “really blazing the trail”[8] for players such as Netflix. In 2015, BBC Store was launched, a download-to-own proposition which allowed audiences to buy their favourite BBC shows online[9]. Most recently, the corporation unveiled the ‘BBC as a platform’ vision, which involves the BBC embracing its scale by being the go-to online brand that curates the best content from across the UK creative sector[10].

But the BBC can do more

Content is still king. Digital hasn’t changed that. However, the commissioning budgets of commercial VOD players are growing exponentially: Netflix and Amazon are forecasted to spend $5bn and $2bn respectively on original content next year[11]. This means that the BBC is increasingly unable to compete in premium genres. By increasing co-productions with Netflix et al, the BBC can put less money on the table but still gain access to this high-end content[12].

The ability to leverage data will also be crucial. Despite efforts with the ‘myBBC’ initiative[13], the BBC still lags behind here. It is essential they embrace data to connect with audiences and help them make sense of the wealth of online BBC content. This can involve content recommendations via a dedicated service personalised for each user. Data could also be used internally to drive commissioning decisions, as well as inform development teams on ancillary online content that can sit around TV programmes.

More controversially, there have also long been calls for the BBC to evolve its funding model. Abolishing the Licence Fee, the BBC’s current source of funding which takes the form of a fixed annual rate paid by all UK citizens who own a TV, would be radical. However, a move to subscription, whereby audiences are charged on what they consume, is arguably more appropriate in an on-demand world. Critics argue that such a move places into jeopardy the very essence of the BBC – a universal service that should not need to cater to individual interests, instead serving a greater good. Subscription would necessarily force the BBC to migrate towards more commercially viable content.

The future of future of TV lies “not with either linear or on-demand, but a creative and visual integration of the two worlds, blending the strengths of both into a single brand[14]”. To avoid extinction, the BBC must embrace this ethos. TV in the internet age for the world’s largest PSB means live broadcast programming offered within the same interface as VOD and interactive content. The two do not have to compete; they can be interdependent and complimentary.

As our society increasingly fragments and our social media pages become echo chambers that reflect our own opinions back at us, the need for the UK to have a unified, impartial, binding and trusted voice to bring the nation together is more important than ever. It is crucial that the BBC continues to evolve so that it remains to be that voice.

[5] Over-the-top content is the delivery of audio, video, and other media over the Internet without the involvement of a multiple-system operator in the control or distribution of the content

[10] This proposition aims to help the BBC become more than the sum of its constitution parts – increasing the relevance of not only itself, but other content-creators facing similar challenges

All hands on deck! How Miniluxe is disrupting the the nail salon industry with data

Student comments on Battle for eyeballs: does the BBC face extinction?