Google Glass remains perhaps the most prominent example of an early innovation in the new frontier of the Internet of Things (IOT) that failed to live up to expectations. Google’s interactive eyewear product, launched in 2012, heralded a new era of wearable technology. [1] Despite generating a great deal of initial hype from tech enthusiasts, Sergey Brin’s spectacles, the first major product to come from Google’s X division, failed to find a foothold in the consumer market. A price-point of $1500 and Glass’s tendency to generate the perception of privacy violations and “Glassholes,” [2] led many industry analysts to write Google’s IOT experiment off as a failure. [3] While Google seems to have given up or at least delayed its ambition for a wide consumer rollout [4,5] the company has pivoted and partnered with nine other companies who are working hard to demonstrate new applications for the technology in industries ranging from manufacturing to the arts. [6] 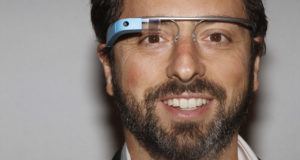 A Glass Half Full?

One of the most innovative and potentially game-changing applications of Google Glass to date has been in healthcare, where a startup has taken the same product that fell flat in the consumer market and by applying new business and operating models has helped to change the outlook on Glass. Founded by Stanford GSB alum Ian Shakil, [7] Augmedix is a San Francisco based start-up with more than $36 million in venture backed capital, which has partnered with Google with the vision of making the physician-patient interaction more human and more efficient. [4] The company has built a client base of approximately 500 physicians across the country, who are using the technology to reduce the amount of time they spend on administrative tasks and more easily access notes, histories, and labs during patient visits. 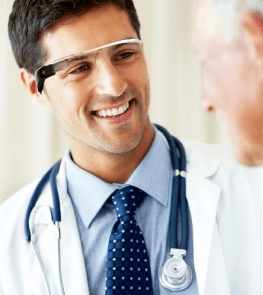 Augmedix’s business model is founded on one of the many inefficiencies in modern healthcare. Physician time is among the most valuable resources in the industry, but recent research suggests that doctors spend a tremendous percentage of their time doing administrative tasks that do not directly drive improved health for patients. A recent time study, which was conducted on a sample of US family doctors, internists, cardiologists, and orthopedists found that “for every hour physicians provide direct clinical face time to patients, nearly two additional hours is spent on electronic health record (EHR) and desk work within the clinic day.” [8] Augmedix’s business model tries to circumvent this problem by using Google Glass as a way for physicians to both transcribe data during patient visits and access data from a patient’s file more readily. As a physician does an examination, she can dictate what she wants to put in her note, and one of Augmedix’s 200 scribes (many of whom are located in Bangalore, India) receives a live stream of the visit and transcribes what he sees. Augmedix claims that they can save physicians more than 2 hours a day, and improve patient interactions by reducing the need for physicians to enter information into a patient’s EHR during a visit. Beyond creating value by improving physician time utilization, Augmedix purports to improve documentation quality and to improve patient satisfaction and the patient experience. [9] 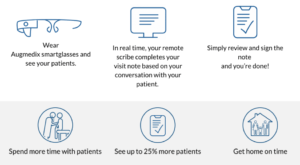 Staying Ahead of the Curve

While I was unable to find any details on the contractual agreement between Augmedix and Google, the relationship will drive a continuous business model challenge for the startup. As of now, Augmedix’s business model relies on Google’s glass technology and eco-system. Were Google to terminate the partnership or underinvest in continued product development, Augmedix’s business model will come under heavy pressure. As it prepares for the future, it should work to maximally align Google’s interests with its own to ensure the lynchpin of its strategy remains intact. Operationally, Augmedix is heavily reliant on its ability to hire scribes in low-cost labor environments. And yet, given that the role demands both near perfect accuracy and a high degree of familiarity with the practice of medicine, the company is likely to have difficulty scaling with its current operating model. As the company invests in building a pipeline to recruit, train, and retain scribes, it simultaneously must prepare for a future in which artificial intelligence will erode the value it can generate from those investments.

[4] Dwoskin, Elizabeth. “Coming to a Doctor’s Office Near You: Live-Streaming Your Exam with Google Glass.” The Washington Post, September 27, 2016.

A New Era of Telemedicine

How to Save the U.S. Postal Service

Student comments on Augmedix: Taking a Look at Your Next Visit to the Doctor