If I told you that the changes to our climate are leading to stronger hurricanes and more-severe heat waves, you’d probably care, but you wouldn’t really change your behavior, would you? What if I added that polar bears are losing their habitat due to the melting of glaciers, would you be willing to sell your car? However, if you learned that climate change is affecting the quality and price of your beer, how likely would you be to do your part?

How does it affect beer?

Beer is one of the most-popular beverages in the world and is made through the fermentation of grains during a brewing process that adds water, yeast, and hops to taste. While your gut may have told you that adjusting the water content is the best way to limit the effects of climate change, those effects are being felt more on the farms. Whether it’s the quality of the grains being produced, the taste of the malt, or the price of the hops, the entire process is being changed by the climate.

Barley is the most-popular grain used in brewing and it continues to be pushed to the limit. Historically, the majority of barley produced in the United States has come from the Midwest, but, due to both climate and profitability, production is being squeezed north. As temperatures rise, northern farmers are forced to between barley (yield of $170-$227 per acre) and corn/soybeans (yield $291-$331 per acre) as their land can now can sustain both (1). As proof, corn production is up more than 8x relative to 20 years ago in Manitoba, Saskatchewan, and Alberta, and scientists are expecting this trend to continue as the average annual temperature increases the estimated 5 degrees Fahrenheit by 2050 (2).

As if barley wasn’t tough enough, hops—which many consider to be the star of the show—are also being affected. Already a bit of a primadonna, hops are getting even more expensive to produce and are being forced even farther north. The optimal growing conditions for hops include 15 hours of sunlight, a hard winter freeze, a hot summer (with temperatures between 40 and 70 degrees Fahrenheit), and about three gallons of water per day—but not enough water to cause mildew (3)—and these conditions are becoming harder and harder to find in the United States. Whether it is due to the droughts in the Pacific Northwest or the fact that climate zones are moving north by an estimated 3.8 feet each day (4), Canada is looking more and more attractive to beer makers. 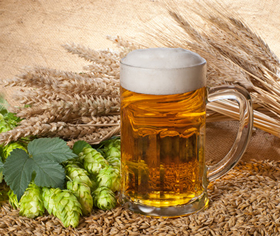 What is MillerCoors doing about climate change?

MillerCoors is the second-largest producer of beer in the United States and is doing its part to help shape the industry’s conservation efforts. We’ve discussed how climate change is affecting the inputs to their products, but water often plays the largest role in the conservation efforts we have seen. MillerCoors understands its responsibility to protect natural resources and focuses on an environmental stewardship strategy that strives to reduce water use in their breweries and agricultural supply chain and restore water in stressed watersheds, to reduce their carbon footprint across the value chain, and to eliminate waste at all major manufacturing facilities (5).

To that focus, MillerCoors has iterated on many efficiency improvements in their breweries in addition to kicking off new projects that are reducing the amount of water required to brew a beer. Their goal is to reduce the average water-to-beer ratio to 3:1 by 2020 (a 25% reduction from the prior decade) and they are well on their way (6).

Lastly, in an effort to return water to natural sources in water-stressed areas, MillerCoors is working towards returning a volume of water equal to their production volume into water-stressed watersheds (7).

Will it always taste the same?

The short answer is yes. However, it may get a little more expensive and your favorite American beers may become a little less American in the years to come. As we continue to learn more about the effects of climate change, I think it’s important to acknowledge that it is a huge issue that affects the entire value chain and that no one company can solve it. While I would love to see MillerCoors use their influence to share more on the topic, at the end of the day, they can reduce their water-to-beer ratio near 1:1 but they will still struggle to find an affordable source of barley and hops in the United States.

A spoonful of climate change?

BP: what should we expect?

Student comments on Anything but my beer