Early this year, Anglo American Platinum (Amplats) – the world’s leading primary producer of Platinum Group Metals (PGMs) accounting for about 38% of the world’s annual supply- announced that it was investing $4 million in United Hydrogen Group, a hydrogen production and distribution business in the U.S., in an effort to bolster the demand for platinum, which is used in fuel cell electric vehicles (FCEVs).  Amplats also has strategic investments in three global fuel cell companies, Ballard Power Systems, Altergy Systems, and Johnson Matthey Fuel Cells, which are all a part of their PGM Investment Program, which provides growth capital to companies that can demonstrate the commercial viability of products or technologies that use or enable the use of the company’s metals.[*2]

Platinum’s top consumer is the auto industry, as they are used in autocatalysts, which converts pollutants from the combustion of fuel into harmless gasses. As auto emissions regulations around the world get tighter, the platinum industry benefits as more cars in more countries will need to be fitted with more of these catalytic converters.

However, mining is a long term business with significant upfront capital requirements.  That is why, it is essential for the miners to be able to accurately forecast the viability of their long term demand, to verify their investment decisions.  For the platinum producers, in the midst of a seemingly positive trend in the tightening emissions regulations, they are extremely worried about the one thing – the wide adoption of pure electric vehicles (EVs), which pose as an extreme threat as they don’t use any platinum.

This is why, with a careful eye on the evolution of next generation vehicles around the world, the platinum industry, such as this recent investment by Amplats, is on a mission to try and steer the world in the direction of FCEVs, since fuel cells requires platinum, as the next generation’s dominant drivetrain.

Platinum is a highly valuable metal (roughly $30/gram), as you may have noticed when shopping for a ring or necklace. It is pricey because its existence is extremely rare – a mere 5 parts per billion in weight in the earth’s crust. It is also unevenly dispersed, as more than 70% of primary platinum is mined by South Africa. The mining operation is also complex, as platinum deposits can be found up to 2,000 meters underground and require intensive labor, water, and electricity to operate. However, its sheer beauty (used to be called white gold), and extreme resistance to corrosion and tarnishing even under high temperatures, makes it a key resource for many industrial sectors. [*3]

Contrary to most people’s intuitions, the jewelry sector is not platinum’s biggest consumer.  Autocatalysts and other industrial applications in the oil refining, petrochemical and glass industries make up over 60% of platinum demand.[*4] 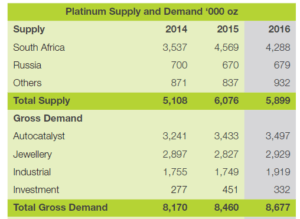 Autocatalysts, which make up 41% of total platinum demand, are used in internal combustion engine car exhausts that convert over 90 per cent of hydrocarbons, carbon monoxide and oxides of nitrogen from gasoline engines into less harmful carbon dioxide, nitrogen and water vapor.  [*5]  It is estimated that about 2-8 grams of platinum group metals are used in single autocatalyst, depending on the size and type of engine (gasoline or diesel). [*6] 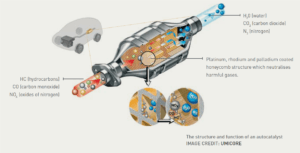 Amplats, as the industry leader in platinum production, is doing what it can to realize a sustainable future for its business, by actively promoting the diffusion of FCEVs, and I think they are right in doing so.

Personally, although there is a lot of buzz around Tesla and the seemingly growing popularity of EVs, I still believe the powertrain of the future lies in FCEVs. This is because the general public is still far from overcoming “range anxiety”, which describes the state of fear drivers experience from knowing that their battery could run out of charge and strand them far from a recharging station. Also, there is the practical drawback of requiring at least 30 mins to charge your car, which can have a major impact on your driving experience. [*7]

However, FCEVs have their own share of challenges, with infrastructure being its biggest.  Although FCEVs have a much longer range than EVs, there is still a long way to go to in terms of putting in place hydrogen stations.

Therefore, in order to accelerate the adoption of fuel cell technology, the platinum industry needs something far beyond an Amplats effort. They need to collaborate more within industry to get other mining companies to join in, as well as collaborate with other industries, whether its BP or Shell in Oil and Gas, car companies such as Toyota and Hyundai, retailers and governments.  This collaboration will be key in driving the industry changing technology, and whether the platinum mining industry can be sustained.