Still largely unknown to the average user outside China, Jinri Toutiao (Chinese for “today’s headlines”) is as unicorn as unicorns can get. Launched just 6 years ago by Zhang Yiming, a Chinese software engineer and serial entrepreneur, Toutiao is most recently valued at $75B, boasting 120M daily active users who spend an average of 74 minutes on the site (2x those of Snapchat and Instagram) and projected revenue between $4.5-7.6B in 2018 [1, 2, 3]. It is also one of the few independent multi-billion dollar startups that have resisted investment from China’s 3 Internet behemoths, Alibaba, Tencent and Baidu [4]. The numbers are surely impressive – but what exactly does Toutiao do, what is its “secret sauce”, and is the “secret sauce” scalable beyond China?

At first glance, Toutiao appears to be a media company whose chief product is a news aggregator that serves personalized content to its users. However, the company views itself first and foremost as an artificial intelligence company that is applying its technology to tackle the entire media consumption lifecycle, from content creation, curation, recommendation to interaction. [5] Liu Zhen, Toutiao’s Senior Vice President reaffirmed in an interview that the way Toutiao approach their content platform that is different from traditional media is to “use artificial intelligence (AI) to connect people and information”. [6]

Toutiao’s effective use of AI, and more specifically various machine learning methods including deep learning, has been the “secret sauce” and growth engine behind its meteoric growth. Compared to Toutiao, traditional news aggregators fall behind due to two major reasons: i) heavy reliance on slow human editors who are constrained by the speed at which they can digest and curate new content, and ii) inability to provide continuous, personalized content to simultaneously hundreds of millions of users in absence of a scalable, algorithmic engine. Thanks to its AI technology, Toutiao can serve more relevant content at a much lower cost (vs. comparable hiring of human editors to achieve similar level of personalization), giving it an edge in an industry where users’ attention, and ultimately value, is captured by content quality, relevance and quantity. [5] Toutiao’s focus on AI also strengthens its own competitive advantage over other news aggregators over time due to the data network effect. As users spend more time reading on the app, the app becomes smarter as it learns more about the users’ behaviors and interests, fine-tunes its recommendation algorithm and in return serves better content. Users then become more engaged and feed more data back into the system, creating a virtuous self-improving cycle for personalization effectiveness. [7]

While Toutiao primarily focused on the recommendation engine in the early days, more recent focus has been on leveraging AI for actual content creation and curation / policing, especially in light of China’s political climate. [8] At the core, Toutiao’s business is a relatively straightforward application of recommendation engines to content distribution – the actual technology and ad-driven business model are not new. In the long run, Toutiao can only stay relevant if it can crack the problem of how to generate good, relevant content in a scalable, distributed manner.

For content creation, Toutiao debuted its bot reporter Xiaoming during the 2016 Summer Olympics in Rio de Janeiro, pushing out 450 stories between 500-1000 words summarizing the game results within minutes after the final whistle. Xiaoming bot has been generally a success – its stories produce similar read rates (# of reads divided by # of impressions) compared to those written by human writers.  For curation, Toutiao’s algorithm is also getting trained on spotting “fake news”, initially based on labeled data from user reports, and now also on fake news datasets generated by its own separate algorithm trained to write fake news. [5, 9] 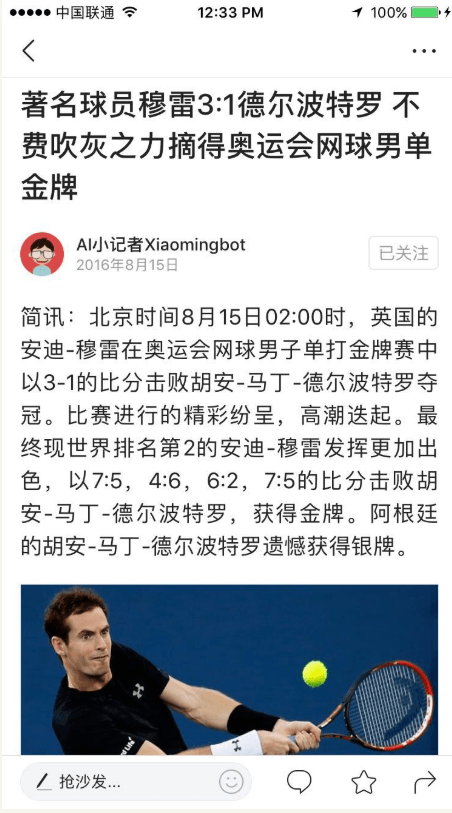 It remains to be seen whether reliance on technology leadership alone is enough in an industry as content-driven as the media. To complement their current AI content creation effort, Toutiao should also look into partnering with high-quality content creators on a variety of exclusive content, similar to the way Netflix has leveraged some of Hollywood’s most creative minds for their Netflix shows. In the long run, Toutiao might need to also build a platform allowing more creative voices and content to be sourced from its own user base, expanding the current stream of content inventory.  However, crowd-sourced content creation will have to be dealt with caution especially in the context of China’s news censorship. [8]

Moving forward, even bigger questions remain: How can Toutiao further develops its value proposition regarding personalization while also not creating a content chamber for its own readers? As the Chinese media demand saturates, can Toutiao’s AI technology that has been developed specifically for China scale and replicate similar successes in the rest of the world?

Smarter e-shopping with The North Face and Watson