A brand near to hearts (and heartburns) – Tabasco. Born and bred in Louisiana, this hot sauce has a 150 year history. Since founder Edmund McIlhenny first started his business in 1868, family-owned Tabasco grew to be a internationally loved brand that made it to space (1). However, Tabasco is under siege by climate change. 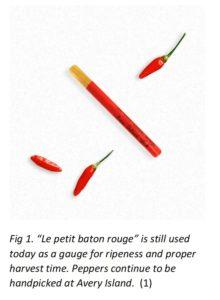 One hundred forty miles west of New Orleans, Avery Island is a salt dome rising above south Louisianan marsh. The dome houses Tabasco’s only factory and its only mine. Half of the workers still live on or around the island and have worked there for generations. Even the peppers were singly sourced from here until 1965, when other farms in Latin America were selected as growing space ran out (2). However, Avery Island is still used for growing heritage seed crop for seeds sent abroad.

Like other agricultural products, the chili pepper (capsicum) is susceptible to changes in climate. Growing conditions impact taste and spice level, so peppers sourced from different areas are blended to arrive at the uniform taste of Tabasco before they are turned into mash and aged for 3 years (2). The raw feedstock and long throughput time adds to the supply chain complexity of Tabasco manufacture and distribution.  The seed crops on Avery Island, the factory, and the salt are all in a part of the country exposed to frequent hurricanes and flooding. In 2005, flood water from Rita came within inches of the factory and shut down bottling operations for 6 days (3).

Over the long term, climate change will likely continue to affect agriculture, including peppers, driving further diversification across continents. Some concerns have already been raised about food growing regions of Central and South America as trends show decreasing rainfall inland and more weather variability (4). Getting the same yield may require more irrigation or nutrients, increasing cost. For Louisiana specifically, a combination of rising sea levels and erosion means that the state is losing 25 square miles of land per year (5). In addition to impact on coastal 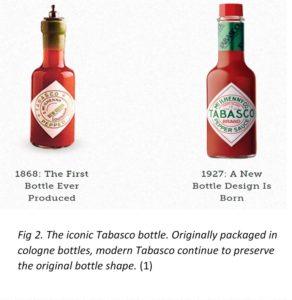 communities, tropical storms of increasing severity will not be as dampened by surrounding marshland. Louisiana’s low-lying road and power infrastructure are also highly susceptible to flooding and the levee systems impede natural flood water drainage if overtopped (5). Extreme heat projected for the American South (6) can increase difficulty growing seed plants at Avery Island. That all Tabasco is made at Avery Island, while incredible in its historical significance, also adds operational risk. Not only are the plant and mine increasingly vulnerable to flooding, the salt dome might become more difficult to access for shipping.  The hub at Avery Island can become disconnected from its spokes.

In the short term, Tabasco has already taken some actions toward securing Avery Island. Resulting from the 2005 hurricanes, a 17 feet levee was constructed around Avery Island along with water pumps, and a backup generator was installed (2).  Thanks to diversification, Tabasco crop supply was not interrupted by flooding. The seeds themselves were also kept in vaults. While the family has kept private about business plans going forward, they are likely also constantly assessing more locations for crop growth and additional ways to safe guard its factory and salt mine. Some other short-term actions can include:

For the long term, the McIlhenny family has also been proactive in conservation projects around the island. This includes planting indigenous grass to slow erosion and build back protective marshland, and running a 170 acre Jungle Gardens biodiversity preserve (8). Some long-term actions that might prove valuable include:

Some major questions remain to be answered:

While the McIlhenny family pepper traces back 150 years, serious challenges exist and thoughtful solutions are needed for the next 150 years. There is a silver lining to all this though – as temperatures rise, so too does the spiciness of peppers. Perhaps in the future we will find our hot sauces getting even better?

Selling Chinese Aircraft in a Protectionist US Climate

From Supply Chains to Supply Circles: How Philips is Rethinking Business in a World of Scarce Resources

Student comments on Adding Heat to Global Warming with Tabasco