The Industrial Revolution not only spurred a time of great economic growth and created millions of factory jobs, it also gave rise to a new line of work – audit [1]. Since this time, the audit services industry has taken off around the globe with the “Big 4” (Deloitte Touche Tohmatsu Limited, EY Global, KPMG International Cooperative, and PricewaterhouseCoopers International Limited) earning $46.3bn in revenue during FY15 Figure 1 [2]. Despite the consistent health of this industry for the last century, the advent of artificial intelligence (AI) and its applications to audit has the potential to fundamentally change the way these firms deliver value to their customers and operate their businesses. 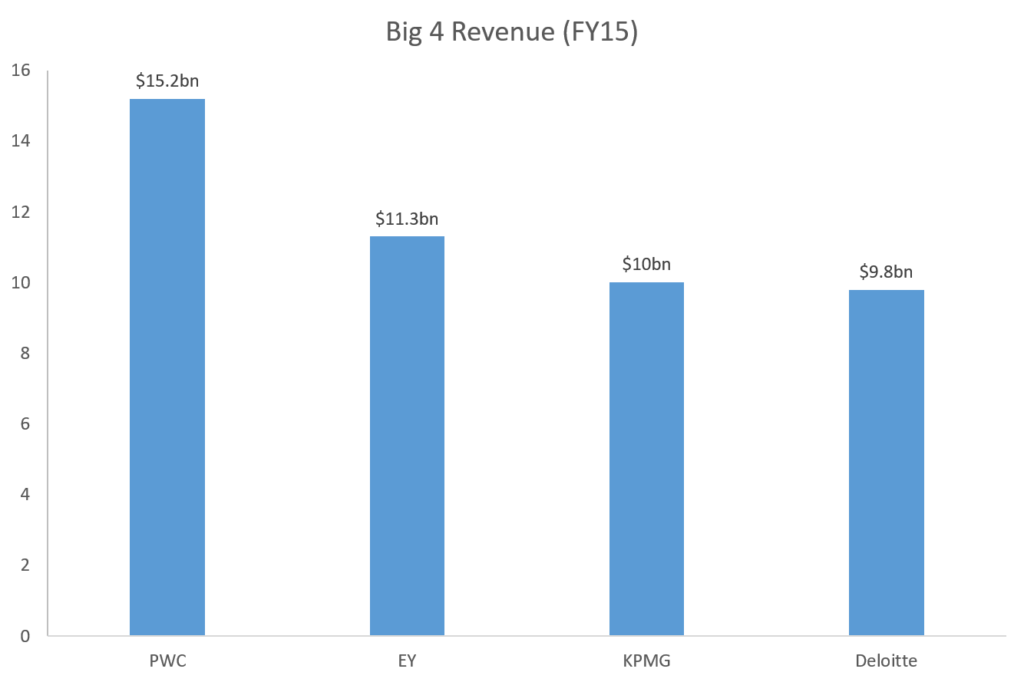 An Evolution in Value Delivery

Professional services firms like the Big 4 typically deploy teams that have a pyramid-like structure to them with a high ratio of entry-level or slightly more tenured employees to manager-level and above employees. Teams are hired by a client ensure the financial transactions of clients are properly accounted which, even by an accountant’s admission, often involves extremely tedious processes (e.g., consolidating financial statements and transaction coding) [3,4]. The time-consuming nature of these tasks is what necessitates the high number of junior staff compared to managers. The core value proposition that auditors are currently bringing to their clients is the assurance is simply that their finances have been properly accounted for. This lack of differentiation is likely the reason why the audit industry has become highly commoditized [5].

As AI and Big Data become a larger part of the audit process, firms now have an opportunity to deliver a differentiated product to their clients. There are technologies that some firms have begun to implement that keep their clients’ financials in the cloud, allowing them to see critical information in real time [6]. By minimizing the amount of low value-add tasks accountants are performing, they can shift their focus to a more advisory role with the client and provide greater value which, in turn, can help differentiate an audit firm from its competitors.

Two of the Big 4 have already made investments into the AI space with KPMG forming a partnership with IBM Watson and Deloitte solidifying a strategic alliance with Kira Systems [7,8]. Deloitte has reported 3,000 active users on the current Kira platform that was deployed to clients and won “Audit Innovation of the Year” for their continued work in AI and machine learning in the audit space [9,10]. So far, the value added to clients appears to be significant but is yet to be truly game-changing.

While a strong case can be made for the additional value audit firms can deliver to clients by utilizing AI and Big Data, how this shift impacts the internal operations of firms is largely unknown. The two main areas where this will likely affect companies like the Big 4 are in contracting and staffing.

The current model of professional services is largely based on three different contract structures, fixed price, cost plus fixed fee, and value based. The most commonly used contract vehicles are fixed price and cost plus fixed fee. A fixed price contract is as it sounds, an agreement for a piece of work in exchange for a fixed price, regardless of hours worked or expenses incurred. Cost plus fixed fee is the same concept except the client pays for expenses as they are accrued (e.g., flights, hotels, or meals while traveling). In the old environment where audit has been highly commoditized, these types of contracts make sense. Now that product differentiation may become a factor, a value based contract where the auditor is paid based on the amount of value created for the client may become the new standard.

The trickiest aspect of AI that needs to be addressed is how it affects junior accountants at audit firms as artificial intelligence will likely do the “grunt work” that is normally assigned to them. It has been said by some that this will allow auditors to take on the role of business advisor but there is an inherent fallacy in this logic. The Big 4 all have consulting arms of their firms and sometimes, as is the example with Deloitte, the consulting arm generates more revenue than audit. The role of a management consultant is to be a business advisor which makes the assertion that junior auditors will start serving their clients in an advisory role dubious at best.

It’s clear that there is legitimate opportunity for AI to optimize the audit industry but firms like the Big 4 must be prepared to adapt their operating model if they hope to successfully implement this technology as part of their business model.