For a long time the American auto industry has been located in the Midwest, but in particular my hometown Detroit, Michigan where the three American automakers are based.  However, it was announced in 2014, that Tesla would build the largest auto factory and facility in the world in Reno, Nevada.

Tesla to date has completed 30% of this $5 billion, 15 million square foot Gigafactory, which is expected to produce 35 gigawatt-hours (GWh) annually.  The facility is being built out of necessity as Tesla’s estimated demand of 500,000 cars per year will require more lithium-ion batteries than is currently produced worldwide [2].  Not only does Tesla need to produce more batteries, but it needs to produce them for much cheaper to be competitive in the mass market.  It is believed that $100/kilowatt-hours (kWh) is where electric-powered vehicles become cost competitive with gas-powered vehicles.  Tesla has not released its battery cost, but a 30-35% reduction is believed to make them competitive at a $35,000 price point for the Model 3 [3]. 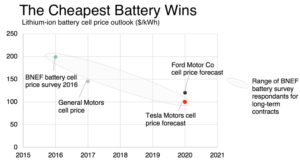 The Gigafactory will not only allow for price reduction, but also supply chain reliability.  Tesla currently receives thousands of parts from hundreds of suppliers who are mostly single source suppliers [5].  The desire to consolidate suppliers couldn’t be more prevalent then now after Tesla missed Q3 earnings because of only producing 20% of the Model 3 cars due to “production bottlenecks” from a battery supplier.  Tesla was forced to fire the supplier, redirect engineers and redesign the process [6].  Tesla can no longer rely on the old auto supply chain to achieve its mission.

Elon has stated that the Gigafactory will be completed by the end of 2020.  In order to accomplish this goal, Tesla partnered with Panasonic for production investment and research & development.  However, Tesla plans to purchase the full output from Panasonic at a negotiated price and be less reliant on Panasonic’s R&D once the Gigafactory is completed [5].  The facility will be self-reliant on energy due to a 70-megawatt solar rooftop [7].

The completion of Gigafactory 1 in 2020 will be a significant accomplishment, but Tesla is already looking for new locations in the US, Europe and Asia to build 2 or 3 more Gigafactories [8].  There have not been many details released on the potential locations or plants themselves, but the goal is to get closer to having the capabilities to produce enough batteries for global car demand. It is a lofty mission that few besides Elon Musk could speak of.

Some Advice For Elon

Although Elon is a genius, he still has areas of improvement like us all.  There are two critical areas that he needs to focus on to accomplish his mission.

The reduction of the price of batteries is a critical component to achieving mass market.  The variable cost reduction will not only need to come from the battery materials, but also from labor improvements.  Tesla already utilizes several robotic machines to reduce cost and increase output, but the Gigafactory will still have up to 6,500 employees [1]. Given that the Freemont facility has an 8.8% incident rate, which is 31% higher than the auto industry, it will be critical to remained focus on the “human” aspects of the factory to avoid union issues and reduced productivity [9].  It would be ashamed if the Gigafactory fails because of a lack of focus on the team versus the technology.

Diversify Suppliers In The Medium Term

Tesla is still reliant on various single source suppliers even with the automation processes in place.  It will be extremely difficult to prevent any supplier issues, similar to the recent bottleneck, without either internalizing or dividing the processes more.  During the Q3 earnings call, Elon said, “Obviously, there are bottlenecks. There are thousands of processes in creating the Model 3, and we will move as fast as the slowest and least lucky process among those thousands. [10]”  It likely does not make sense to internalize too many processes from an efficiency perspective so Tesla should find more suppliers.  However, this will not be possible until there is more scale in production.

Even Elon Doesn’t Have All The Answers

Tesla has made significant progress, but still only sold 83,922 of the 77 million cars sold globally in 2016 [11].  Does Tesla even have a chance of becoming a real threat regardless of their supply chain improvement?  Will GM beat Tesla at its own game given GM is planning the release of 23 electric models by 2023?

The Tip of the Iceberg: Climate Change, Lettuce Shortages, and Tesco’s Efforts to Adapt its Supply Chain