Telecom companies are the invisible highways that enabled digital transformation of media in the last decade. Without AT&T, Verizon, Sprint, Comcast, Time Warner, and other players providing the LTE and high-speed copper or fiber technologies that deliver our content, the smart phone’s value proposition would be zero, there would be no “Netflix and chill,” and studios’ content distribution would be limited to movie theaters and DVD sales or rentals. Telecom and media thus have a distinctly symbiotic relationship.

As the smartphone revolution neared saturation ~2012, telecom companies faced a period of significant decline in subscriber growth1 (Exhibit 1). Intense competition between operators ensued, but it was difficult to convince consumers what “better coverage” or “faster speed” really meant. Having largely captured the value of “wave 1” of the digital revolution, the telecom industry needed a new way to capture value.

Looking externally, telecom companies saw that advertising spend had increased nearly 25% 2010-20152 (Exhibit 2) driven by digital methods, and that the content licensing revenues paid to studios (costs to telecom P&Ls) increased 14% in the same period3 (Exhibit 3). For studios, a stream of mergers had not cracked the question of how to make media production profitable in the digital age. Convergence was at hand.

AT&T’s acquisition of Time Warner is still recent news and the merger will not close until 20174, but initial statements indicate that significant changes to both AT&T’s business and operating models are at hand.

AT&T’s business model in the first wave of digital revolution was to provide users high-speed, vast coverage on mobile and broadband networks for telephone service, data access, and video content5. Network engineers and technicians built data highways to carry the expensive content that buyers licensed from studios6. AT&T captured the content delivery value they created through monthly fees charged to mobile and broadband customers. Studios produced TV and film content, the value of which they captured by distributing directly to end users via theater or DVDs or indirectly to end users via TV and internet licensing agreements with telecom companies7. Telecom companies captured some but the studios captured most of the value from selling advertisers access to the content subscriber base.

In the new AT&T-Time Warner company, both AT&T and Time Warner will still perform their fundamental tasks of operating networks and producing content. But, AT&T’s business has fundamentally changed from being a network operator to additionally being a content producer. AT&T’s strategy and key stakeholders thus both broaden in scope. Financially, both businesses have significant up front capital investment requirements with long payout periods and the allocation method for investment dollars will need to be defined. Hopes are that revenue will increase from 1) new subscribers seeking access to AT&T’s premium content and 2) from advertisers’ willingness to pay more for access to a larger subscriber base.

Operationally, Time Warner is now a partner, rather than a supplier, for AT&T, changing the nature of the two companies’ relationship. The companies will also have to redefine decision rights for major choices such as strategic company direction, performance metrics and incentives, and investment distribution between networks and new content. Tactically, AT&T and Time Warner can combine back-office functions such as HR, Finance, and IT to realize cost savings.

Opportunities and challenges ahead

AT&T has the opportunity to define what good looks like in a converged media world. Major mergers such as Comcast-NBC Universal and Verizon-AOL8 have produced moderate to unsuccessful results9 but AT&T has the advantage of learning from them. Using that knowledge, AT&T has potential to successfully merge content creation and delivery mechanisms in a “wave 2” digital revolution to increase existing subscriber bundling and attract new subscribers to their services.

AT&T will also now hold immense amounts of media consumption data on its users – could it be further monetized? Initial studies indicate that significant value could lie in surgically targeting consumers rather than broadly targeting a region as is done today10. For example, AT&T could learn from mobile payments that Joe Subscriber is a dog owner and show him dog food ads during a TV commercial break rather than cat food ads. Consumer satisfaction increases and AT&T is able to charge advertisers more for highly targeted views.

We cannot forget that AT&T is also a significant player in the commercial network sphere, with ~50% of its revenue coming from business connectivity and data solutions5. IoT promises even greater use of commercial networks and AT&T must be careful not to downgrade its enterprise image by aligning with a content creation studio. AT&T’s new monolithic size will also demand that its executives find the right balance between consumer and commercial focus.

The Time Warner acquisition is a significant moment in AT&T’s 100+ year history and with the right decisions made about how to adapt their business and operating models, AT&T can create significant value for both their customers and their shareholders in its second wave of digital revolution. 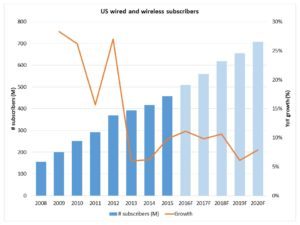 1US – Broadband services and 3G services 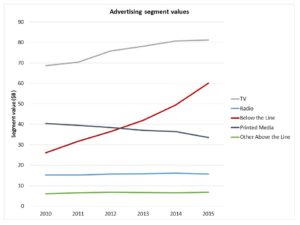 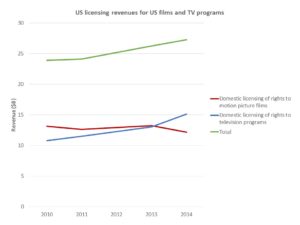 3“Estimated domestic licensing revenue of the motion picture and video industry in the United States from 2010-2014,” US Census Bureau, January 2016, https://www-statista-com.ezp-prod1.hul.harvard.edu/statistics/185112/domestic-licensing-revenue-of-the-motion-picture-and-video-industry-since-2005/, accessed November 2016 via Statista.

Illumina – Shining a Light on Your DNA

Student comments on A Bigger Piece of Pie: Converging Content Creation and Delivery at AT&T-Time Warner