Netflix is a company that has a history of being a disruptor to incumbents ever since its launch back in 1997. It started as a DVD by mail service that competed with traditional rentals such as the giant Blockbuster. However, the founder, Reed Hastings, had plans for Netflix to become a streaming service long before the idea was economically or technically viable. It even pitched the idea to Blockbuster, offering to build their streaming service in exchange for a cash infusion and 49% of the company, an offer that the rental giant refused. They filed for bankruptcy in 2010.

When Netflix launched its streaming service in 2007 it did it by acquiring content produced by different studios, mostly for movies that had already had a theatrical release and for TV shows that had either already finished or that when still being aired, although with a large window to their first time air date on network TV. However, even though Netflix didn’t have a first window right into any of its programming, it provided, and still to this day provides, a more convenient alternative to traditional cable TV to many uses at a much lower cost. This can be seen in how the number of pay TV subscribers in the US has evolved over the past 10 years. It has been steadily decreasing since 2012, while the number of Netflix subscribers has been steadily increasing in the same time period. 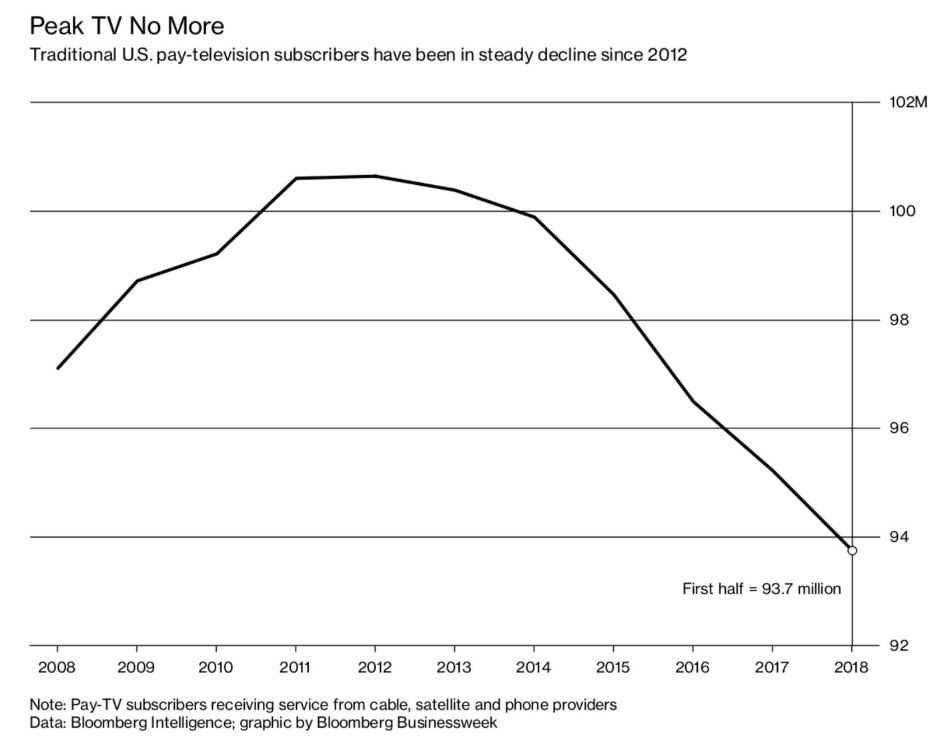 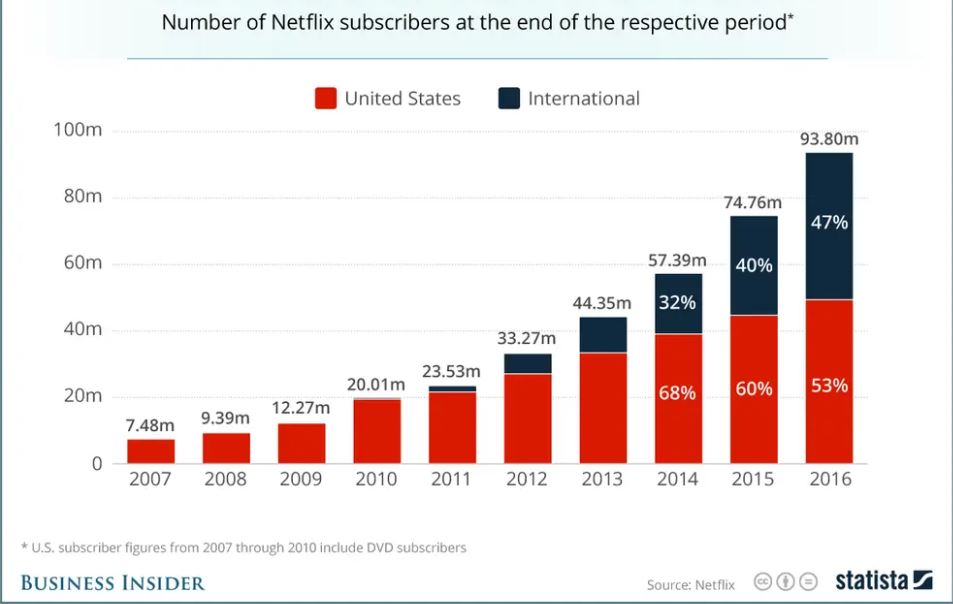 The reason behind this shift from pay TV into streaming platforms, mainly Netflix, can be attributed to, as was mentioned before, simply a better user experience, at a better price. Netflix gives the users the ability to consume content at their own pace. When they want and how they want. They can watch through the entire thing at once or in more than one sit in. Additionally, users don’t have to sit through commercials which not only makes for a worse user experience, but also increases the overall amount of time that a user has to sit through to consume a movie or a TV episode. This is not only important because of how much better the experience is for user, but also because of what it implies. The fact that Netflix doesn’t get any revenue from traditional advertising, means that they can acquire and develop content that caters to everyone and that makes for a complete user experience. They are not tied to develop content that targets an advertiser’s target audience.

This characteristic became particularly important in 2013 when Netflix started developing original content. The freedom from not being tied to any advertisers demands gave them the ability to develop whatever type of content they wanted. Additionally, the fact that it is a streaming service, and not a traditional TV channel, with a fixed time slot and calendar days to be filled with content, meant that things could be developed just considering what would constitute the best creative output. It seasons had to be 9 episodes instead of 8, if episodes needed to be 52 minutes instead of 44, it wasn’t a problem. These made it easier both to attract talent because of the creative liberties that they had. And last, by then, Netflix had amassed such a huge quantity of data on viewing patterns, what people liked and which target segments consumed which type of content, that they could develop titles specifically catered to whichever segment they chose to target.

This growth in streaming service is not only disrupting the TV industry, which as we showed has seen a steady decrease of Pay subscribers in the last years, but it is also impacting the number of people who chose to go to the traditional cinema. Even though this may be mascaraed by the total box office gross due to rising ticket prices, total admissions (as in number of tickets sold) have also been steadily decreasing in the US since the boom of home content consumption alternatives. 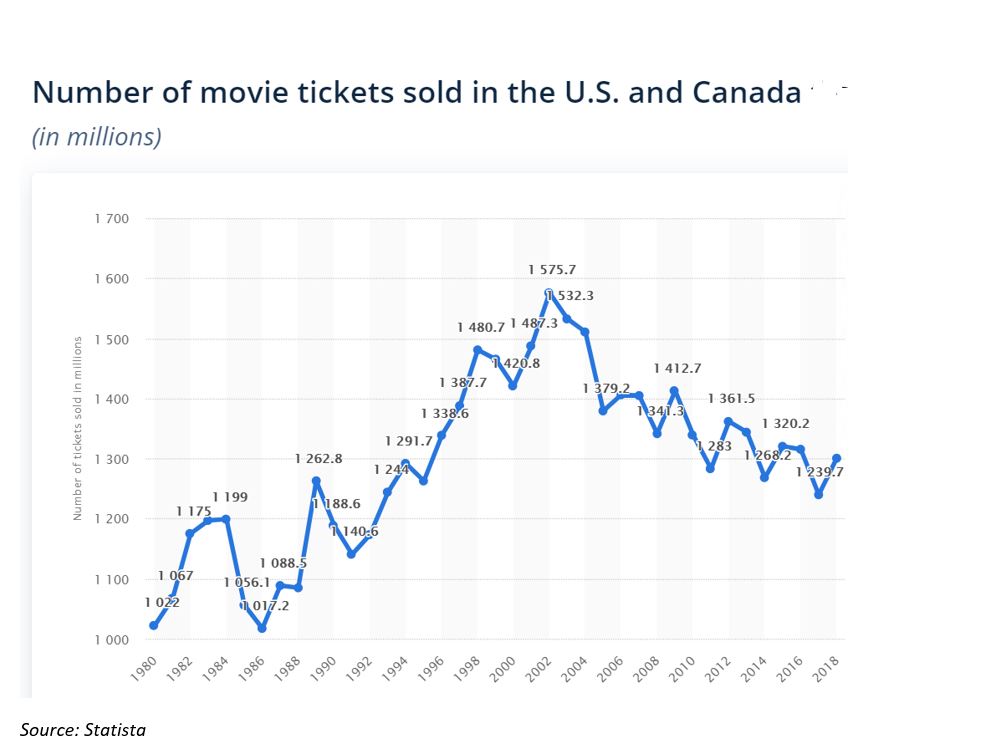 Traditional companies have been reacting to this trend as well. A lot of them have started pulling content from Netflix in the hopes of decreasing the power of the streaming giant, and also as preparation for the launch of their own direct to consumer alternative to compete in the streaming industry as well. This has led to the start of what is being called the “Streaming Wars”. This includes companies like Disney with their Disney + service, NBC with Peacock or Warner also launching their own service combined with HBO. However, these are not the only companies that have entered the space. Tech giants like Amazon and Apple have also created their own platform and are producing original content in the hopes to compete against Netflix.

The landscape for producers, distributors and consumers of media and entertainment has changed more rapidly in the last year than ever before, largely thanks to the rise of Netflix. Traditional and new players are ramping up to compete head to head and the landscape looks more crowded every day. Netflix definitely changed the way the industry operates and is winning the battle against both incumbents and new players.

Sephora – Blurring the line between Digital and Physical

Student comments on Why Netflix is winning the entertainment battle