Airbnb has contributed to a massive change in lodging segments and how consumers perceive travel by creating a new virtual trust between local hosts and visitors. Since Airbnb started in 2008 it grew rapidly, currently, valued at $30 billion only seconds to Uber.  Airbnb share of the hotel industry grew from 1.3% in 2014 to 4.5% in 2016, announcing their first profit supported by 80% increase in revenue during 2016. The company is estimating rapid growth with a targeted revenue of $3 Billion by 2020 and their revenue grew 50% last quarter to about $1 billion up more than 50 percent from the same period last year. As Airbnb strategy to target a wide range of customers, no doubt that it will continue to grow to utilize its large user base and international exposure which at this point is more powerful than large group hotels, Airbnb is only second to Marriott international in terms of total inventory and number of private listings with around 1 million listings. 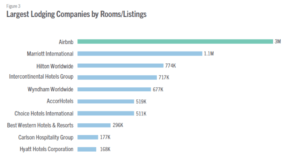 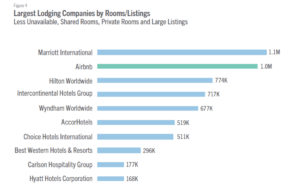 Airbnb provides a simple technological infrastructure, which hosts, and guests can use effortlessly to book and promote their own homes. By providing free access to book and list properties, Airbnb quickly generated a dedicated following of users and hosts and swiftly overcame the initial entry and mobilization barrier. The company also maximized its transaction by letting customers browse freely and with at no charge through all listings until reservations were secured. Once the host and guest Airbnb accept the transaction charges the guest an additional transaction fee of 6-12%, while hosts are charged a 3% transaction fee. 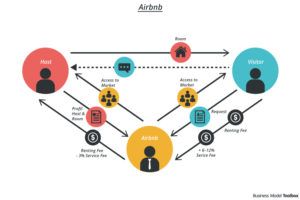 Airbnb states that their inventory is marginal and is not affecting the residential market, as it represents a small fraction of the total housing inventory. However, by looking into the inventory by city it is not a fully accurate statement. According to Airbnb housing report on DC in April 2017, only 8,700 entire homes were rented by Airbnb representing less than 3% of the D.C. area housing units. however, Airbnb entire home posts are around 14,100 representing 4.6% of the Washington D.C. housing market. So, in general, it may not affect the residential market in the whole D.C. area, but because of the nature of the Airbnb units, they tend to be concentrated in touristic or urban areas. Similarly, in New York City, according to BJH Advisors report in June 2016, the disproportionate share of Airbnb has increased the rents in Manhattan and Brooklyn, as over 90% of the Airbnb units which is over 51,000 units are located in two areas which have less than 60% of the housing supply in New York City. In evidently, 53% of the Airbnb listing is concentrated in five neighborhoods including East Village, Soho, and Williamsburg.  Out of the 51,000 units listed on Airbnb, 8,058 are defined as impact listing, over 50% of these listing were by hosts who manage multiple Airbnb units, if the 8,058 were made available to rental market it would increase the vacancy rate to 4% which represent 10% increase of the current vacancy rate between 3.4 and 3.6. Further on, this concentration is driven by the premium price that hosts can make in these areas. For example, in SoHo and West Village the average monthly premium is $822 over the median asking price. 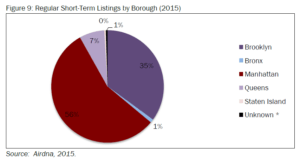 Airbnb’ impact may not be significant, however with the current growth rate in urban areas, and the premium rate that incentives the hosts to expand their listings on Airbnb it will impact the long-term residential rental market which may eventually lead to an increase in urban gentrification. Historically, Airbnb’s business model strived through minimal regulations and controls in most locations in the United States, however, the increase in legal restrictions for business models such as Airbnb are posing a significant threat to the company’s growth strategy. Startups and disruptive companies, which are predominantly based on advanced technologies often outpace current legislation and face questions regarding legality from governmental jurisdictions enforced by fellow competitors and companies in relevant sectors. Airbnb so far is definitely winning the hospitality battle, but will it win the multifamily battle?

Making Lemonade out of Insurance Lemons

Peloton: Bringing the Studio to You

Student comments on Watch out! Airbnb is near by!