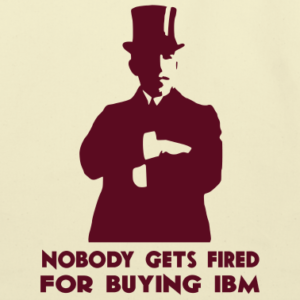 IBM is a great example of innovators’ dilemma. Important strategic bets IBM did in last 30 years either was against the trends in tech industry or poorly executed due to fear of self-disruption. Although being a company that invests billions of dollars in R&D owning the largest number of patents in the world, IBM is being disrupted by Microsoft, Google and even by Amazon which is originally an online book retailer. As a result, the most valuable tech company of 1980s has been losing its revenues,  customers, products and talents constantly. 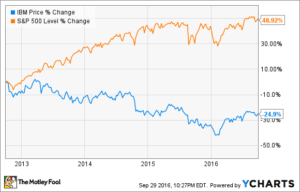 IBM was first disrupted by software revolution. IBM was the leading computer hardware company until disrupted by portable and compatible PC revolution that was led by Compact, Apple, Microsoft and Intel. in 1911, IBM began operation as the Computing-Tabulating-Recording Company. Since then, Big Blue path the way for technological revolution. During the era of room-sized industrial computers, IBM made a huge reputation for being the sole industry norm. in 1980s, IBM made a huge leap to personal computers following the rise of the industry. Initially, IBM made a deal with Microsoft to put the operating system into IBM’s computers. However, Big Blue was so arrogant that it didn’t think of the consequences of this non-exclusive deal with the little software start-up. It didn’t take much time for others to clone IBM’s PCs and use the same operating system developed by Microsoft. Bullying or suing was not an effective tool to go after those clones anymore. Microsoft’s software revolution was already disrupting the hardware companies after making it an industry standard. Intel on the other side was capturing the chip side of the value chain. Intel and Microsoft came together to form WINTEL partnership which eventually kick the Big Blue of the PC market. The historical success of IBM business model made it arrogant and vulnerable to see the threats coming from its own allies. 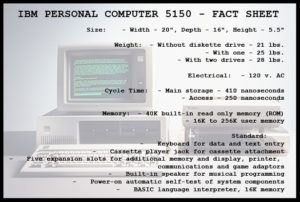 In 1990s and 2000s, IBM locked in B2B services business while missing out internet and consumer tech revolution. After the commoditization of PC hardware market which lost the lion share to Intel and Microsoft, IBM wanted to transform itself as a world-class business services company focusing on Fortune 500 clients. At the time, IBM was making only $ 3 BN from services. By 2010, services generated $56 BN. Although, it looks like a success, B2B services focus created another dilemma for Big Blue while internet and consumer tech was setting the agenda creating unicorns like Google, Facebook and Amazon. Long sales of B2B limited the growth even in the tech bubble of 2000s. IBM developed an extensive know-how and client based in B2B while totally missing out internet revolution. This was the second biggest miss after being disrupted by software revolution. Failing at PCs previously also made IBM skeptical about entering a new consumer game challenge. Company built its core competency is around research, sales and consultancy. Hence, strengths of IBM business services became the barrier in front of capturing the value of Internet.

In 2010, IBM decided to transform itself from legacy hardware businesses to cutting edge technology provider in AI, Cloud, IOT, Digital and Blockchain which are called strategic imperatives by IBMers. IBM did what they do best and came with radical innovations such as Watson and IBM Cloud. IBM Watson beat world chess champion and Jeopardy champions. This could have been the IBM’s turn to disrupt the tech industry. However, IBM was again not aware of Christensen’s incredible BSSE theories. Instead of commercializing AI by starting from the easiest solutions such as Siri and Alexa does, IBM aimed moonshots for its Fortune 500 partners trying to replace doctors and lawyers. Meanwhile, consumer tech companies enjoyed high growth rates and got big enough to pour enormous resources in research and talent acquisition. Amazon, Google and Facebook built giant consumer-facing businesses that allows that test, incubate and scale any frontier technology such as AI and Cloud. IBM again couldn’t compete with AWS in cloud or Deepmind in AI.

Main barriers in front of IBM is to shift the culture, attract the talent and enter into consumer tech. IBM has competitive research and software capabilities. However, commercializing the patents or innovations has been become the main challenge. In order to compete with Amazon or Google, IBM needs to hire more and more business and consumer minded employees. Being a 106 years tech company itself is a very big challenge to attract new talents who prefer to work at high growth and fast paced environments. Temporary remedy for this solution is to focus on acquiring start-ups and partner with VCs. Finally, IBM has to break its dilemma and prejudice against consumer business. B2C would not only enable IBM to scale it’s innovations but also attract better talents. IBM is a great and important company which made significant positive impact in the world. I am optimistic about its future despite all the challenges.