In an increasingly digital age, traditional big box retailers are taking a big hit. They are slowly realizing that their stores are becoming nothing more than galleries for online shoppers. Given its current trajectory, Toys R Us seems to be amongst the walking dead of big box retailers. 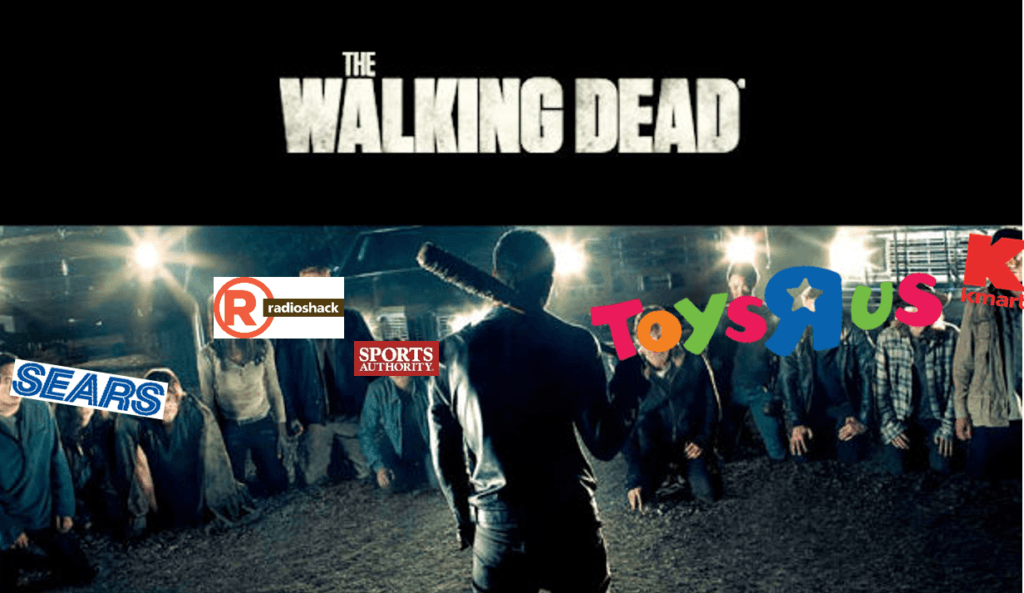 In the past 10 years, U.S. retail e-commerce sales as a percent of total retail sales have increased from ~2.5% to ~8.5%, with no indication of a slowdown (1). Consumers have become more comfortable shopping online. A major driver of this is Amazon leading the way with fast, free and efficient shipping. Many retailers, including Toys R Us, have worked with Amazon in the past on fulfillment (giving Amazon valuable data for free) but have started to break away as the online retail channel has exploded with increased digital connectivity across laptops, phones and tablets – not just desktops anymore.

In the past, retailers saw e-commerce as a supplemental business that could be outsourced. In 2000, Toys R Us decided to work with Amazon, which ultimately ended in a lawsuit (2). In 2006, they started taking e-commerce more seriously and decided to outsource their online operation to GSI Commerce – a white label service provider that handles many retailers’ entire web operation from marketing to fulfillment and even customer service. However, as online sales have continued to take over the retail industry and approach nearly 10%, retailers such as Toys R Us have realized they need to be omnichannel to serve the new digital consumer (3).

Toys R Us Losing in an Online World

Toys R Us has seen its sales decline continuously over the past five years (4). The primary driver for this decline has been a combination of increased competition from traditional and online retailers. Initially, Walmart became their biggest threat and competitor throughout the 90s. However, since the dot com era, online sales have become their biggest long-term threat. Especially as traditional retailers such as Walmart have done a better job in the online retail space.

Toys R Us captures value by being the one stop shop for all toys and baby products by providing a wider selection of these items than any other mass retailer could. They also allowed consumers to come and see the products first hand before they buy them. Especially big ticket items such as bikes, swing sets, sporting goods, etc. Unfortunately, the internet has allowed consumers to find an even greater selection online and shop different stores simultaneously to find the cheapest option. Consumers have also started feeling comfortable with buying without seeing the item firsthand. If they really feel the need to see before they buy, then they have started to go in store, check out the item and then buy online at the cheapest retailer. Due to this new shopping behavior, being omnichannel has become very important.

As a result, Toys R Us decided to bring its web store operations in house in the summer of 2016 (5). However, I believe it may already be too little too late. While Walmart has been investing heavily in Walmart.com for years, Toys R Us is just getting started. They have a lot of catching up to do with Amazon and Walmart and they aren’t headed in the right direction. Combined international and domestic holiday sales for 2016 fell more than 3% from the prior year. Meanwhile, toy sales in 2016 were expected to end up 6.5% over the previous year (6).

Digital disruption knocked Toys R Us off its feet over a decade ago and it still hasn’t been able to get back up. In an online world, retail has become very difficult due to thin margins and increased requirements of shipping/logistics. Economies of scale mean everything and as the 800 pound gorillas in the space get larger, it will be harder for specialized retailers like Toys R Us to keep up. I expect the bleeding at Toys R Us to continue and wouldn’t be surprised if there is an acquisition and/or bankruptcy filing in the foreseeable future. It’s never a good sign when a company with negative profitability has to keep raising debt or extending the maturity of their junk bonds (7).

Student comments on Toys “R” Us: Now Cast in The Walking Dead