As the cost of batteries and renewables is steadily coming down, energy storage emerges as the new kid on the block. With more renewable energy connected to the grid and electricity prices varying greatly between peak and off-peak hours, the case for storing electricity has strong economics. And while there is undoubtedly value in storing, for example, solar energy for times when the sun is not shining, it is still unclear what business models will be able to capture the most upside.

Batteries are more or less a commodity and have historically had low margins especially with Chinese producers stepping in. Scale is king and that is also why Tesla is building a Gigafactory, putting a large bet on traditional lithium-ion battery technology. Other companies have figured out that it is not the battery itself that counts but how that battery is integrated, understanding when and how energy is used, and dispatching that energy at the right time back to the grid.

Energy storage for businesses will never be the same. 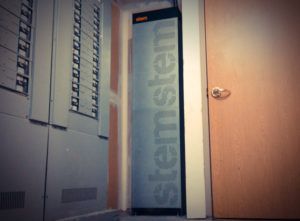 California-based STEM does not own a factory. And still, its bread and butter are large-scale commercial storage systems. The company assembles battery cells and power electronics made by others and adds a software layer. Its software is able to analyze the user’s energy demand and predict when and how much will be used. It charges the system during times of low electricity prices and discharges when rates are high, saving the customer from paying expensive peak electricity prices.

What has STEM figured out that others haven’t?

STEM has raised $205M to date including funding from leading investors such as Angeleno Group, Iberdrola, GE Ventures, Constellation New Energy, Total Energy Ventures, Mitsui & Co, and RWE. A large milestone for the company was a funding round of $100M in 2016 for project finance, invested by Starwood Energy Group.

Many energy storage startups have attempted to innovate on the hardware side of storage, but STEM is one of the few players in the space who have been able to create an integrated digital solution, which benefits both businesses and utilities and contributes towards a smarter grid. The startup has created an innovative business model, which is able to capitalize on large-scale projects such as its 1MW distributed storage project in Hawaii or its large contracts with Southern California Edison and New York’s Con Edison.

Will STEM be able to sustain this advantage? Who will win the storage game?

Nay on Waymo: A Prediction for the Self-Driving Car Race