It’s crazy to think that we used to pay for music downloads. When Apple introduced the iPod and iTunes, it was normal to pay $0.99 for a track you really wanted. Then came along Pandora, Songza, etc., allowing users to stream music. In Songza’s case, a team of “music experts” would curate playlists that they thought “sounded good” and users would then listen to those curated playlists, regardless of each listener’s individual music taste. On the other hand, Pandora’s strategy allowed for more differentiation because it manually tagged attributes of a song so that users could pick and choose tags and filter to make playlists that they liked. However, the real winner here is Spotify, which uses big data, artificial learning, and machine learning techniques to deliver a unique and personalized music listening experience.

Spotify, launched in 2008, is the largest on-demand music service in the world with more than 150 million active users. Spotify operates under a freemium business model and earns revenue through paid subscription fees and advertisements to third parties. As of 2018, 45% of its users pay to use the premium subscription plan. Spotify is most definitely a data-driven company, using data in pretty much any part of the organization. Daily, Spotify users create 600 gigabytes of data that the company uses to perfect its algorithms and machines to improve customer experiences and extrapolate insights. In addition, Spotify crawls the web constantly to look for blog posts and other pieces of text about music to understand what people are saying about specific artists and songs, as well as which other artists and songs are being discussed alongside them.

There are many ways in which Spotify uses data to create value for the organization and its customers. Some of them are as follows: 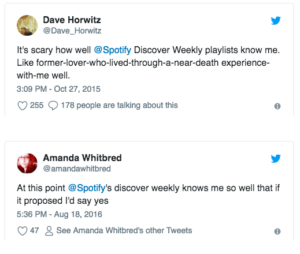 In addition to these more permanent features, Spotify also uses its data for other fun and interesting things. For example, in 2013, Spotify used streaming data to predict the winners of the Grammy Awards by analyzing users’ listening habits to determine the popularity of the music. In the end, 4 out of 6 predictions made by Spotify were correct. Furthermore, Spotify has used its data analyses to shape its marketing campaigns in different areas of the world. For example, if a particular marketing campaign worked well in Chicago, it could run a similar campaign in Den Haag, Netherlands because based on music preferences, Den Haag is more similar to Chicago than Austin, New York, etc.

On February 28th, 2018, Spotify filed for listing on the New York Stock Exchange and shares recently began trading on April 3rd. With an ever-growing presence in many countries and continuously growing customer base, more data will be created, meaning better recommendations and predictions, and it will be interesting to see how Spotify continues to push technological boundaries in an industry that can be classified as “art”.

[4] “How Does Spotify Know You So Well?” https://medium.com/s/story/spotifys-discover-weekly-how-machine-learning-finds-your-new-music-19a41ab76efe

Correlation Ventures: Taking the “Gut Feel” out of VC

Student comments on Spotify may know you better than you realize