Quirky was a crowdsourced product innovation platform that allowed the general public to submit ideas for new products. Quirky’s team of engineers and designers would take the best ideas and transform them into real products, ultimately sharing some of the product revenue with the inventor.[1] Quirky was a darling of the startup world and a banner waver for the open innovation movement. It raised over $180 million from Kleiner Perkins, Andreessen Horowitz, and others, and was praised by crowdsourcing experts as an effective example of the power of open innovation.[2] [3] In 2015 Quirky filed for bankruptcy and sold off its assets, offering a cautionary tale on the limits of Crowdsourcing in certain applications. Quirky’s demise is complex, but I outline below what I see as 3 of the most critical reasons for its failure.

I’ll start with value creation … Quirky struggled to create real value for consumers for a couple reasons, the first being a lack of focus and coherence. Quirky’s strict adherence to its open approach resulted in a vast array of disconnected products. There was no overarching strategy or core competence guiding Quirky’s work which, many argued, led to poor product quality.[4] This may indicate that an overly “pure” approach to listening to the crowd can lead you in a dangerously unfocused direction. Secondly, as we’ve discussed in class, one benefit of crowdsourcing is that it speeds up the innovation process. However, Quirky took this to an unhealthy extreme – they were producing 50+ hardware products a year.[5] They were trying to do too much and a as a result, didn’t do anything particularly well.[6] Moving on to value capture … Quirky struggled to find a viable way to monetize on the value they did manage to create. This was, in part, because products were developed in a vacuum, divorced from a business model.[7] There was not enough consideration put into messaging, distribution channels, pricing, etc. and Quirky ended up creating products with thin margins that could only make money on volume.[8]

2. Over Reliance on Crowdsourcing as an Accurate Assessment of Demand

I believe that Quirky fell into a dangerous “crowdsourcing trap” by assuming a positive response from the crowd was an accurate indication of market demand. The crowd can be great at elucidating pain points, but humans are notoriously bad at predicting what they actually want in life. I believe Quirky may have relied too much on crowdsourcing as the sole indication of customers’ willingness to pay and/or change their behavior. For instance, if Quirky had been more through in assessing the market, it may have avoided spending nearly $400,000 on developing a Bluetooth speaker that sold only 28 units.[9] I think it’s extremely important for businesses to listen to their customers, but crowdsourcing should be viewed as one amongst many tools that can be used in demand assessment and idea generation.

Lastly, there is a very real question in my mind as to whether crowdsourcing leads to truly breakthrough products and services. The answer to this obviously depends on how one defines “breakthrough” … we hailed the camelback water bottle as meaningful innovation in our class discussion. Sure, maybe the camelback has marginally improved the lives of a very niche subsect of young outdoorsy folk, but I personally doubt we will look back on it as a product that meaningfully changed consumer behavior or purchasing patterns.

This concern is heightened when you see that Quirky’s product output is stuff you would expect to find in a modern version of SkyMall. They created products like an adjustable electric power trip, a tool for separating egg yolks, a plastic stem that inserts into a lemon or a lime and becomes a push-button spritzer, and a corkscrew that cuts the foil off a wine bottle and doubles as a pour spout. I think business Professors Sebastian Fixson and Tucker Marion put it best when they wrote, “The quirky community came up with … few radically novel breakthroughs … most of the individuals in the Quirky community had no prior new-product development experience. As a result, members’ attention clustered around incremental improvements to familiar consumer products … Quirky produced competitive products – but rarely segment leaders…”[10] Crowdsourcing can be a really powerful tool, but I believe it needs to be carefully applied and harnessed correctly to achieve true step-change innovation in a product context. 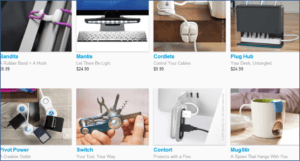 Student comments on Quirky: Why the Crowdsourcing Platform Failed and its Broader Learnings for the Open Innovation Movement