Last year, PlayStation raked in $11.5 billion dollars of revenue for Sony against strong competition by Microsoft’s Xbox One, making it the company’s largest revenue drivers. However, these sales were not solely generated by huge console sales (Exhibit 1). PlayStation’s platform-driven model has also allowed Sony to capture through software and its online network, which is huge, given the increasing global shift to digital business models. 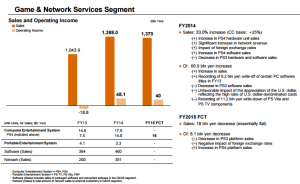 Capturing $11.5 billion dollars is no easy task, however Sony has followed a number of strategies that helped mobilize the PlayStation system. These strategies include:

1. Providing complementary products and services, both internally and externally. Not only did the console hardware-driven complements, but its software was also essential to its success. Through external partnerships, PlayStation gave users single-platform access to movies, music, and games (e.g., Netflix, Amazon, Hulu Plus). Internally, Sony levered the PlayStation 4 platform to provide access to the PlayStation Network, which included PlayStation Plus (access to game patches, betas, and most-importantly, online multiplayer gameplay), the PlayStation Store (where owners could download games, music, and movies), and now PlayStation Vue (where users could watch TV without cable or satellite – e.g., streamed sports games). Sony was able to capture a lot of value with these ancillary services.

2. Offering a superior product for cheaper pricing. Compared to the Xbox One, PlayStation 4 had much higher graphic performance (PS4 games were running at HD 1080p, while Xbox One’s games were primarily in HD 720p). Additionally, PS4 had a distinct advantage when it came to memory, as it has a much faster GDDR5 variety, versus the slower DDR3 on Xbox. During the release, PS4 was priced at $399 per system, while Xbox One (including Kinect) was priced at $499. Note that although Xbox eventually dropped its price to $349 over time, PlayStation had the advantage of receiving a lot of positive publicity, attracting a larger share of the market earlier. Pat Garratt of VG247 said it best when he mentioned, “…even though Microsoft quickly u-turned […], PS4 had already hit a critical social mass. People buy the consoles their friends own […]; if you get a quick launch with little competition, your growth can be exponential.”

3. Providing a product with multiple standalone value propositions. In this new technology age, PlayStation’s strategy was not to just create a gaming platform, as had been the case in many older systems. The console also created standalone value for customers via its BlueRay player (though I’ll admit that would have been a relatively expensive BlueRay player) and computer-like functionality via online access.

The strong mobilization strategy positioned Sony to take advantage of network effects generated by its PlayStation Platform, while also capturing value through a “razor and razor blade” model. With more users purchasing the PS4 platform early on, positive direct networks effects began to take place. Users, like myself, wanted to play on similar platforms as their friends and family, since learning new buttons, experiencing different control dynamics, etc. was often a pain. And with more users, the PlayStation Network (with the benefit of online multiplayer functionality) began to grow, which further perpetuated network effects due to easy interaction, game competition, and communication with other players on the online platform. Further, the online competition and communication was instrumental in allowing Sony to capture sustainable direct network effects, since switching costs kept increasing over time. In many cases, users had invested significant time building their gamer profiles, which included trophies, friend lists, national and international rankings, etc. Having to rebuild that on a new platform and new network would be difficult, so users were quick to pay the $50 annual membership fee, allowing Sony to capture additional network revenue with economies of scale.

Additionally, PS4 experienced indirect network effects. With more users, game and application developers were more incentivized to develop software for the platform, as they could potentially receive higher sales. PlayStation was able to create value for the developers (e.g., by creating a revenue-generating opportunity for them), while also capturing some value through royalties and/or upfront payments. And for those high-potential, highly successful games (e.g., Flower, which won Casual Game of the Year), PlayStation strove to gain system exclusivity by offering developers either higher royalty rates, development subsidies, or up-front payments.

PlayStation made a number of right moves to compete with Xbox One, primarily through its mobilization strategy. By selling a superiorly spec’d product for cheaper, PlayStation quickly gained a large contingent of users, which led to the direct and indirect network effects (with high switching costs) that strengthened its position over time.