Most people know the U.S. Constitution requires a census be conducted every 10 years. [1] But few realize that census results determine how $600 billion federal funds are allocated. [2]

With $600 billion on the line, one would think accurate results are important. Unfortunately, the U.S. Census Bureau is stuck in the stone age of data collection and analysis. The most recent census—the 2010 decennial—was a “pen and pencil” census that relied on households filling out and returning mailed questionnaires. [3] For non-reporting households, temporary workers were dispatched across America to physically obtain census data. [4]

Not surprisingly, the 2010 decennial was the costliest census ($12.3 billion), and had dismal response and return rates: [5] 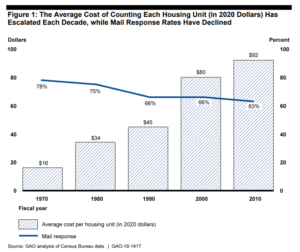 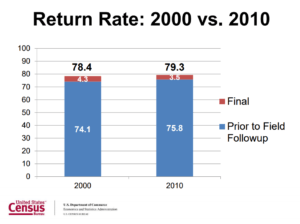 As attention turns to the 2020 decennial, the Census Bureau claims four new “innovation areas” will help modernize the next census: [6]

While these are steps in the right direction, they fall short of modernizing the 2020 decennial, or justifying its $15.6 billion price tag. Instead, here are some suggestions for improving census results.

First, Congress should enable a rolling census, which could collect and distribute census data in a continuous fashion, and be supplemented by cheaper statistically grounded surveys. [7] A rolling census would minimize labor costs from field operators (the 2010 decennial hired 635,000 temporary workers to investigate non-responses). [8]

Second, the Census Bureau should be more proactive in using administrative records and third-party data. For example, the Census Bureau could issue federal grants to universities (who are far more experienced at analyzing big data) to scrape publicly available data on a state-by-state basis. EDI could be established between the Census Bureau and state agencies, which would automate transmission of relevant census data (e.g., vehicle registrations, birth and death certificates, state tax returns).

Third, the Census Bureau should lobby for the creation of a national ID system. While some claim national IDs raise civil liberty concerns, [9] it is likely that tech and financial companies (not to mention hackers) already can assemble fairly accurate databases, with far better accuracy than the 2010 decennial’s 79.3% response rate. A national ID system not only would remove billions from the Census Bureau’s budget, but also would make other federal and state agencies more efficient.

Unfortunately, the Census Bureau remains decades behind current data collection and analysis technologies, and is trying to catch up with baby steps.

[3] Statement of Wilbur Ross, Secretary of Commerce, before the U.S. House Committee on Oversight and Government Reform (Oct. 12, 2017), available at https://oversight.house.gov/wp-content/uploads/2017/10/Written-SWLR-HOGR-Testimony-FINAL.pdf.

[5] The first chart is from David A. Powner’s testimony (see reference above).  The second chart is from the U.S. Census Bureau’s “Census Coverage Management” report, which was issued on May 22, 2012 and is available at https://www.census.gov/2010census/news/pdf/20120512_ccm_newsconf_slides.pdf.

Who do you trust more with your money – a machine or a human? Roboadvisors disrupt the financial services industry

Student comments on Losing at the Census Bureau is as easy as 1, 2, 3…