As a former member of Dinner Lab myself, I distinctly remember how a friend first pitched it to me: “It’s like a cool secret supper club where you get a tasting menu and open bar for a fixed price in a really cool venue in the city.” It was an easy sell for foodies and wannabe-foodies, alike. In exchange for paying an annual membership fee of approximately $150, a diner gained access to sign-up for pop-up dinner parties held every couple of weeks in surprising locations throughout a city (like a helipad). Each meal cost around $65 per person and featured the culinary expertise of an up and coming chef seeking to develop a restaurant concept.[2] 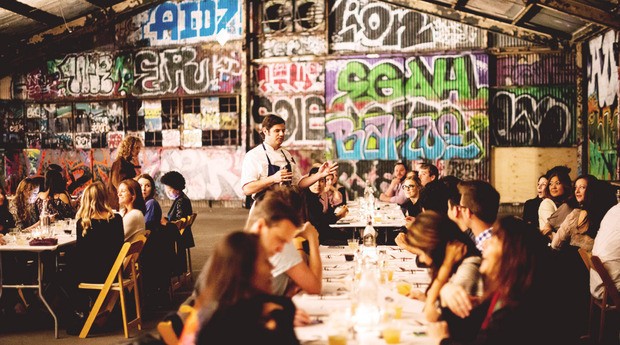 So what is the value creation for chefs? The Dinner Lab concept allowed sous-chefs from top restaurants to crowdsource opinions on their dishes and restaurant concepts before taking the risk of opening a new permanent establishment. Diners were required to fill out a detailed survey at the end of each meal summarizing their reactions to each dish and the overall dining experience. The data was shared with the chefs, which allowed them to discern general and market-specific consumer preferences and further refine the concept. The idea was that ultimately, the crowd-generated feedback would increase the likelihood of success for a start-up restaurant by making the process more of a science than an art. In fact, in describing its effort to generate the first crowdsourced restaurant ever, CEO Brian Bordainick said, “we believe we can normalize data from thousands of people across the U.S. and get a restaurant to maximize their meals in the market.”[3]

Apart from charging members for an innovative dining experience, Dinner Lab also planned to capture additional value through monetizing its aggregated data across its operations. For example, by analyzing event sign-up data (i.e. speed of sell-out), Dinner Lab could discern taste trends for different types of cuisines by geography. Additionally, it could parse out demographic data to determine different market segment preferences. This wealth of data could potentially be very valuable to third parties other than partner chefs, such as current restaurant owners.

Despite the promising value capture opportunities, Dinner Lab suddenly folded in mid-2016. While a couple of Dinner Lab veteran chefs have gone on to have successful careers (i.e. Kwame Onwuachi on Top Chef), the promised crowdsourced restaurant never came to fruition and disappointed diners were left wondering what went wrong.[4]

Despite having a great idea and gaining scale and adoption, Dinner Lab represents an ominous example of overestimating the value of a crowdsourced platform and underestimating the capabilities necessary to scale a crowd-based business model.